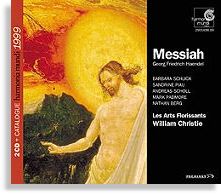 If the grave opening of the overture doesn’t catch your ear, the following fugue will surely impress with the warm yet precise tones of the Les Arts Florissant orchestra – their playing is clean and precise, yet passionate, displaying the architecture of the music splendidly. If you seek a reading with a heavier orchestral sound, this might not move you very much. But for those willing to examine this musical gem of a recording that Christie has achieved, this set readily shows its many wonders.

The first recitative, the tenor’s “Comfort ye, my people”(CD 1: track 2) is tender yet commanding – listen to the faraway fadeout of Mark Padmore’s “coooooom-fort yeeeeee….” as well as the orchestra’s finely matched tones. This is the non-astringent, non-jarring voice that the best of contemporary period orchestras have achieved. The result is of a performance that is attentive to details, yet relaxed in its music-making. An example occurs in the first chorus, “And the glory of the Lord” – beginning lightly, achieving a confident grace that is neither tired nor noisy.

Yet, power, strength and fire are not missing here. Transforming into a violently rocking machine, the LAF orchestra accompanies Padmore as he delivers his “laugh Him to scorn” with fierce pleasure. Later in the tenor arioso, “Thou shalt break them with a rod of iron” (2:12), one of the most vivid depictions of violent action in Baroque music, he is well-matched by the sharp stinging figures on the strings.

If Nathan Berg’s bass could be a little thicker, it is not missing sincerity, and has an added clarity that many basses will bury under their voices (and beards). See how, before the Darkness Aria, his trembling but dramatic recitative is turned into light as he sings into the lines of “but the Lord shall arise upon thee”. This is musical story-telling of the best quality. The beautifully-played Baroque trumpet (no keys, no valves) of James Ghigi is a firm companion to Berg in the glorious “The trumpet shall sound” (2:16), valiantly calling for the raising of the dead. Similarly, his “Why do the nations so furiously rage together” is stirring and commanding, whipping the orchestra into a frenzy.

Likewise, Andreas Scholl’s “He is like a refiner’s fire” (halfway through 1:6) continues to amaze me with its sudden outburst of surging drama, a piece that would fit perfectly into some Italian opera. The technical speed and skill of this brilliant countertenor is very evident here. Listen on to 3’11 to hear the beauty of his voice, even at the top of his range, after which he launches again into a dazzling passage of great difficulty, culminating in a scintillatingly ornamented “fire”, shot through with ups and downs, turns and trills.

The musically violent nature of this aria is seamlessly, with just the right pause, led into the next chorus, a calmly moulded “And He shall purify”, a testament to Christie’s impeccable sense of pace. What then amazes more is the way this chorus is inconspicuously, with the lightest push possible, stirred into a climax that does not in any way detract from the essential calm confidence of the piece. 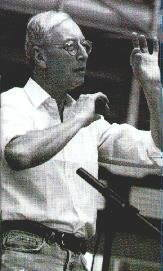 THE GREAT genius of William Christie (left) in his direction of Baroque music is his incredible ability to fuse grace with power, musical line with musical thought, the result being some of the most musically intelligent conducting I’ve ever encountered.These qualities are again exemplified by the aria “O thou that tellest good tidings to Zion”. Listen to Andreas Scholl’s complete confidence of utterance, his lightly applied vibrato, the tiniest yet most effective of trills, the sudden surge of volume at “aRISE!”, the almost seductive descending notes on “The gloooory oo-of the Looooord…” (which the choir also effects!); even his totally musical solution to the potential stumbling over the word “Jerusalem” takes my breath away. Add to this the little ornamemts and decorations that ALL the performers add to the score, you get a Messiah that surprises and delights on nearly every track, throughout the discs. This is why even those who may already own a good Messiah may wish to invest in this refreshing reading of an over-played oratorio.

As for the key choruses, the Italian-style, skipping “For unto us a child is born” is slightly laid-back, the climax of “Wonderful(!), Counsellor(!)” needing somewhat more brightness. Still, the LAF choir’s skill is satisfying, and as before, Christie has a way of making each chorus “brighten” as it proceeds to its end. “His yoke is easy” embodies the way the choir sings – difficult pieces sung as if they were child’s play, bearing their skill and music intelligence. The LAF choir creates a real pianissimo in the opening of “Since by man came death” before plunging into the alternate sequences of loud and soft. The result is like some big Romantic Requiem. In the choral entry of “Lift up your heads” (2:4), both women and men sing contrastingly but in complimentary voice that eventually joins in tonal harmony, as a choir should be. Joined with the orchestra, all perform “The Lord gave the word” with obvious great relish for both the music and the words.

Ironically, then, “Hallelujah!” begins in a relatively low key, although the booming timpani, bright trumpets and blarring horns quickly start to redress this. Christie slowly and inconspicuously builds up the music to its triumphant close. Still, if you’re odd enough to buy a whole Messiah just for this chorus, don’t buy this one.

AFTER the tender “Pastoral Symphony”, in which the orchestra achieves an almost perfumed organ-like sonority (listen to the long lines of the continuo, especially the bassoons). The role of the Angel is here, as per tradition, taken by a boy soprano (or treble), whom I’m happy to report, is skilful and lyrical, neither breathless nor immature. His heralding of the chorus of angels is stirringly affirmed by the first appearance of the trumpets in “Glory to God”.The sopranos now make their appearance, and if you do not recognize the two names, prepare to be stunned by the faultlessly executedly runs of Sandrine Piau, who likewise ornaments the score much more than one might expect, to great effect. Like Scholl, her little trills and turns in “Rejoice greatly, O daughter of Zion” (1:13) are constantly springing surprises on the listener, especially on her da capo (back to the beginning) where in repeating the music again, she adds tiny grace trills to the ends of the word “Rejoice” [check it out at 2’49”!] – what spontaneity and music! No more rigid score-reading types from the modern school of performance (one of their biggest disadvantages)!

Barbara Schlick, a well-known soprano in Baroque circles, sings with a voice that is generally heavier than the light British soprano voice of the late 80s (e.g. Emma Kirkby), but nowhere as excessive as mainstream sopranos. Her vibrato too is adequately applied where appropriate, and overall, this adds up to a voice that might be called from the best of both worlds. She is confidently calm in “But Thou didst not leave His soul in Hell” (2:3) and tender but emotional in “How beautiful are the feet of them” (2:8). In her important aria, “I know that my redeemer liveth” (2:14) is secure and ringing. She is gentle with the lines, and yet never lacking strength of utterance. 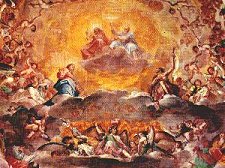 Christie crowns his magnificent Messiah with a performance of the final two choruses, “Worthy is the Lamb” and “Amen” that spans every good attribute that I’ve laid out above. It is not only clear and graceful where needed, but brimming with an excitement that finally breaks out at the climax of “Blessing and honour, glory and power”, with the drums and brass singing victoriously clear with the choir.

The build-up towards the final “Amen” is as irresistible as it is gripping with finality – just listen to those trumpets trilling with just the right dose of accelerando!

It is fitting of course for Handel, the second best composer to set the English language to music (the king is still Henry Purcell), to conclude Messiah with an extended 3-minute fugue on the single word “Amen”. In this recording, it is as if Christie has brought us all the way just for this – the choir seems to expand its voice by as many layers as there are clouds in heaven; the orchestra growing in power as the music chorales towards the last “Amen”, the trumpets and drums glowing and bright with glory, thundering exultation.

In Singapore, this disc is available at or can be ordered from, HMV (The Heeren) or Borders (Wheelock Place).