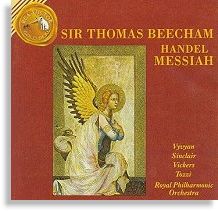 Includes full libretto in English only. Recorded in 1959 (stereo).

Oops. Recently, in the pages of Gramophone, Lady Shirley Beecham has written to clarify that the 1959 Beecham recording of Messiah, reviewed here, was in fact not orchestrated by Sir Eugene Goossens. According to her, Sir Thomas had engaged Sir Eugene to arrange the oratorio for a full modern orchestra, but as time passed, Sir Thomas found the latter’s pace and quality of work unimpressive.As time was running short, Sir Thomas asked one Leonard Salzedo – a musician (and composer) in the Royal Philharmonic – to undertake the task. Oddly, Sir Goossens was the one paid for the job eventually (and damn well) done – the man never even attended the recording sessions.

Lady Beecham suggests that Sir Thomas did not want to embarass his life-long friend, and so, rather than reveal the truth, simply made no mention of the nature of the situation in the booklet notes of the RCA album.

The first difference you might notice here is when the tenor’s “Comfort ye” (disc 1: track 2) accompagnato begins, with its harps rippling gently in the background. As he proceeds to his aria “Every valley”, trumpets and other wind instruments ensure a colourful accompaniment – and this is the great glory of this set. The idea of reorchestrating a well-established piece of music is not that often welcomed, but in the case of Leonard Salzedo’s fascinating and bountiful reworking of Handel’s Messiah – I can only wish he had done the same with more Baroque works!

The effect of the score is like a combination of English choral tradition with a huge dose of orchestration lessons with Berlioz, and even a touch of Beethovenian woodwind! The impressive scoring for the brass constantly surprises me, as does that for the extended woodwind and again, the harps. Listen to the woodwind group that introduces the choir in the chorus “And He shall purify” (1:7), then the harps, and then the perfectly-placed stroke of the triangle, which does not return until the impassioned climax at the end, where the music modulates in solemnity, with the heavy brass singing majestically with the choir.

In the darker moments, as in the “Darkness Aria” (1:10-11) for bass, the bigger string section effectively creates a shimmering field of foreboding, while the horns and woodwind float atmospherically behind. All the greater the contrast when “For unto us a child is born” (1:12) bursts in with the great boom of drums and basses! “Wonderful! Counsellor!” is joyously enhanced by the trilling of the triangle, the crash of cymbals(!) and the military accompaniment of brass and timpani.

All four soloists leave very little to complain about. Though from the regular operatic tradition, even I cannot resist their conviction and passion as they sing valiantly to match the titanic forces surrounding them. Giorgio Tozzi’s bass is deep-voiced but his words audible; tenor Jon Vickers is powerful but fresh; soprano Jennifer Vyvyan secure and adequately appealing; and mezzo Monica Sinclair is deep and strong, even motherly. Perhaps the two women are not particularly distinctive – but truth is, I treasure this set mainly for the choruses!

The pastoral sequence begins with a beautifully sustained and hymn-like Pastoral Symphony, which I think even Beethoven and Vaughan Williams would have approved of. In the following recitative, the soprano is accompanied to heavenly effect by harp ripples and arpeggios – clichd, but wow! It works! The reworking of the instrumental accompaniment can be quite considerable – listen to the string parts and clarinet musings in the background of “His yoke is easy”. Note also that the arrangement has also increased the chordal colours of the work, allowing the orchestra more than the “somewhat monotonous repetition of tonic and dominant” (Beecham, in his notes).

“Surely He hath borne our griefs” is a weighty affair, while “All we like sheep have gone astray” is almost reminscent of a whole flock running ranch-like in the wild! It is evident that Salzedo must have derived great enjoyment in rearranging the fast and big pieces, which means in many cases the choruses. Nevertheless, the tenor’s “He that dwelleth in heaven” recitative is almost Wagnerian in its heroic utterance, which is only emphasized by the furious and militant arrangement of “Thou shalt break them”, resplendent with the percussive explosions of suspended cymbals, brushes on snare drums(?) and strings pizzicato, not to mention the regular drums! 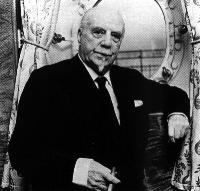 There is little in the form of “notes” in this set, except for a 3-page essay by Sir Thomas Beecham (1879-1961. Photo left) on the traditions of performing Handel and a defence of this arrangement – it is an intelligent and sincere effort, if a little outdated and ambiguous/misleading – “Messiah is unique among the 20 oratorios of Handel in being the only one which has any connection with the Christian religion.” – depending on how you define them, there can be as many as 27 oratorios, and those with a “connection with the Christian religion” are I think more than one.

The 1959 recording, made at the end of Beecham’s life, is from the early stereo era. Investors need not worry about the quality – it is very fine, even if there are a couple of spots where the sound body seems to drop off in volume. Otherwise, everything is reproduced with more than adequate presence. Even the different sections of the giant choir is surprisingly well-spaced and differentiated.

Hallelujah! (2:19) begins with a huge blast of percussion and brass; the orchestration is thick, the trumpets blaring jubilantly with the even more raucous trombones, triangles chinging exuberantly with the massive choral component as the woodwind swirl along in the windy background. Picking up speed, Beecham drives everyone into a frenzied conclusion (one of this conductor’s many skills) as the percussion roll and trill for their life! In the final chorus, “Worthy is the Lamb” (2:24), in addition to the imposing timpani rolls and brass chorale, the descending “receive motifs” are effectively scored for woodwinds. It is not long before the brass and percussion (cymbals again!) have further opportunties to embellish the score, and then it’s on to the final “Amen”.

If I haven’t made it clear, despite the size of the choir, their singing is mostly clear and above all stirring and passionate. In this concluding paean, I think I can hear tubular bells and an organ behind the gargantuan splendour, but all is noisily and gloriously drowned out by the violins at their highest registers, horns whoo-ing away, trombones punctuating, cymbals crashing… good heavens! What fun!

I’m sure Handel, who is said to have once wished aloud that he had a cannon to assist his orchestra, would have been very impressed.