GEORGE FRIDERIC HANDEL (or Georg Friedrich Hndel) was born in Halle in the year 1685, the same year his greatest contemporary, Johann Sebastian Bach was born. Of German descent, Handel became widely known for his Italian operas, quite the rage in the early 18th century. But Handels fame was to become even greater as he finally settled in England in the 1710s. Bugged by rival opera-composers, his Italian operas fell out of favour just as music in the vernecular continued its rise. Pressed for music in English, Handel adapted and created the first of the great English oratorios, Esther (1720).An oratorio is a large-scale choral work, with solo vocal roles, accompanied by an orchestra. Its most distinctive characteristic however, is that unlike opera, it is not dramatised. Although many oratorios still retain the theatrical dimension, no costumes, props, sets or acting is involved. 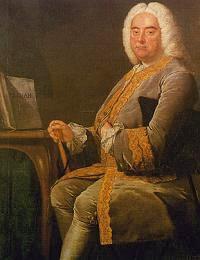 Messiah, needless to say, is Handels most famous work, but it also caused considerable controversy during its first performances. Simply put, there were those who were aghast that the man had “plundered” the Bible and turned it into a concert for public enjoyment. Handels oratorios, to which ticket-holders had paid to attend, were essentially the 18th-century equivalent of modern-day musicals.

The popularity of Messiah has been over-focused on the final chorus of Part II (there are three), the “Hallelujah!” chorus, a fine one though it is. The Messiah in turn has very unfortunately overshadowed the many other wonderful oratorios by the composer, such as Joshua, Solomon, Samson and Judas Maccabaeus, although this has been efficiently redressed in the 1990s. In 1997, with the recording of Alexander Balus from Hyperion Records, all of Handel’s oratorios are now available on record.

Anyway, it is true that in terms of consistency, Messiah is filled with some of the very best writing of Handel. From the first aria for tenor, “Every valley shall be exalted” to the thunderous final “Amen” chorus, with the angels trumpeting the glory of God, Messiah is plentiful in melody, extensive in the range of emotions portrayed and very accessible even to the listener uninitiated in classical or choral/vocal music. It is simply one of those overplayed good pieces of music. Its quality has inspired various musicians to arrange the music for more contemporary tastes: for example, Mozart provided alternative accompaniments, while Sir Eugene Goossens in the 20th century arranged the oratorio for a full modern orchestra (Beecham’s recording is reviewed here).

Nowadays, these stories tend to be disregarded, but the (to me) annoying tradition of standing during this chorus remains. The problem caused by this is simply that the opening of the piece is always disturbed by the cacophony of the mass rising of the audience; shorter members of the audience become blocked; and one simply feels uncomfortable for the next few minutes as standing is not exactly a comfortable position to listen to music, unless you sang along (which opens up another set of problems). Still, if several hundred people can find themselves enjoying the spirit of the occasion – why not.

Handel combines the sheer grandeur and power of his Germanic roots with the colour of his Italian experience, joining this with the unique flavour of the English language. His music can thus be powerful, like the tenor arioso “Thou shalt break them with a rod of iron”; or it can be colourful and skippy, like the wonderful “For unto us a child is born” (which is in fact based on an Italian song); or it can be stirring and majestic, like the “Hallelujah!” and “Amen” choruses. (My favourite “Hallelujah!” chorus is actually the one in The Occasional Oratorio.)

Recordings of the Messiah are numerous. Complete recordings take up two CDs (it is a 140+ min. work). For a bargain recording, we have the Double Decca reissue featuring the Academy of St-Martin-in-the-Fields, conducted by Sir Neville Marriner. With appealing soloists, a first-rate orchestra playing a balanced style between authentic and modern practices, and good recording, this makes a neat and attractive introduction. For a period instrument alternative, go for the Hyperion Dyad reissue (CDA 22002 – reviewed here) featuring The Sixteen orchestra and Choir, with a group of very reliable British singers, including one of my favourite Baroque sopranos, Lynne Dawson. Another budget-priced recording is available on Naxos (8.550667/8), performed by the Scholars’ Baroque Ensemble. 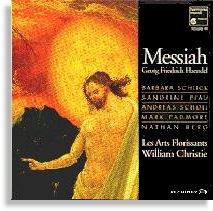 Handels scoring includes a vocal part for a counter-tenor (the modern counterpart for the castrato of Farrinelli fame). This is a male voice of the highest range, singing the equivalent of the female alto or thereabouts. In most recordings, the countertenor part is taken by a female alto – and that amounts to quite a loss in the experience of the music. Note also that different editions of the score also allocate different arias to different singers.

Anyway, for those of you who wish to experience the unique, lyrical yet powerful voice of the countertenor, consider the Harmonia Mundi recording by Les Arts Florissants (reviewed here), which was nominated for a Gramophone Award in 1995. Directed by William Christie (a talented and multi-award-winning conductor), this recording is a supreme achievement, marrying the best of Messiah-performing traditions with a distinct French flavour featuring sensitive ornamentation and perfectly-judged tempi, dynamics and orchestral balance.

John Eliot Gardiner is an established conductor of Handels music, whose Monteverdi Choir is one of the best choirs in the music world, a group of great precision and musicality. If you are interested in a choral sampler of Messiah, try his one-CD mid-priced compilation on Philips Solo. Another well-established director of Baroque music is Christopher Hogwood, who also offers a one-disc sampler on Decca/L’Oiseau Lyre.

For a different experience of the opposite sort, try Sir Thomas Beechams recording of Sir Eugene Goossens spectacular arrangement on BMG/RCA (reviewed here), involving a full-scale orchestra with an array of percussion, accompanied by a choir large enough to form a small army. This is an outrageously inauthentic but totally fun performance! The set comes with a free third CD featuring 17 minutes of parts normally not performed in the common version of the Messiah.

Click here to visit the Handel Homepage where you can find more info on Handel, including links to the full libretto for .
HANDEL’S MESSIAH: Recommended Recordings
sop=soprano, alt=alto, cten=countertenor, ten=tenor, bas=bass.
If you have opinions on the recordings below – why not write a review and submit it to the Inkpot!
Modern, medium-scale performance

Whenever possible, Chia Han-Leon takes a walk in the rain just for kicks.