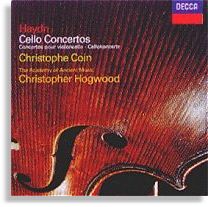 Inktroduction to Haydn’s Cello Concertos
I’ve heard that these works weren’t discovered till quite recently. Yes. The C major concerto was considered lost for good until the manuscript parts were discovered in Prague in 1962 by a librarian in the national museum. The D major concerto, on the other hand, was for many years thought to be the work of Haydn’s principal cellist, Anton Kraft, before contrary evidence showed up.

So how do we know Haydn really wrote them? The C major concerto was identified and authenticated by a thematic entry which Haydn made in his Entwurf-Katalog that referred to a Concerto per il violoncello in C that matched the rediscovered manuscript parts. The D major concerto was authenticated after the autograph manuscript turned up in the cellars of the Austrian National Library which was found to be signed and dated by Haydn.

Wow. How did so many things happen all at once? Ironically, this can be traced to the inception of Communist governments in Hungary and Czechoslovakia after World War II. In Hungary, the Ezterhzy Archives were opened to the public, which turned up a lot of unpublished Haydn music. A complete archive of Haydn works was also found at Kescthely Castle on Lake Balaton, southwest of Budapest. All this music was confiscated by the Communist government and taken to the National Museum in Prague. Scholars were then admitted to catalogue and examine these manuscripts, which turned up, among other Haydn works, the C major concerto in 1962.

The first modern performance of the work took place later the same year at the Prague Spring Festival on 19 May 1962, with Milos Sadlo as soloist and Charles Mackerras conducting the Czechoslovak Radio Symphony Orchestra. 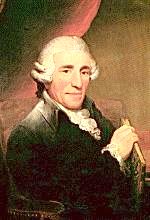 Benjamin Chee visited the Biblioteka Jagiellonska in Krakw once and turned up a Gluck manuscript entitled “Iphignie en Singapour”, which was rejected by musicologists worldwide. Give me a break.