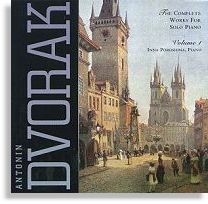 Dvorak’s name has been so entrenched in the “New World Symphony” that his piano output has largely been undeservedly neglected. Ironically then, that his Humoresque in G-flat for solo piano is in fact a popular salon piece known and loved all over the world. In this series of five discs, pianist Inna Poroshina takes on Dvorak’s entire output for solo piano.

Dvorak’s Theme and Variations Op. 36 clearly grows from a mind as fertile and as inspired as that of any piano great. The theme is set in A-flat major, the same key as Beethoven’s Piano Sonata Op.26, of which the first movement was written as a theme with five variations. Comparison with Dvorak’s own set of eight reveals that the Czech composer was not only inspired by the giant, but may even have modelled the work after him. The first two variations are rhythmically similar to Beethoven’s first variation, while the third features the same modulation – to A-flat minor – and the same syncopated accompaniment, seen in Beethoven’s own minor-key modulation. 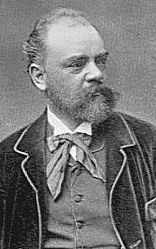 Dvorak (left) takes the minor key on to the fourth variation in the form of a short Moravian scherzo; the fifth utilises double octaves and expands the melody into a triplet motif, much as Beethoven’s fifth (and final) variation starts with a triplet embellishment of the theme. After the sixth variation, an intermezzo of reflective solitude, Dvorak steps into more virtuosic ground in the seventh, with semiquaver shakes alternating between accompaniment and melody.

The last variation reminds me of those by the young Brahms in its thick chordal texture and style. Another Beethovenian device is used towards the end: following a bridge incorporating a section of melody in the left hand set against a trill in the right, a soft passage sets the pace for the final climax. The main theme is stated grandly, then a dramatic flourish of cascading octaves seems to end the piece; yet Dvorak surprises us with a suspended cadence, and a delicate coda ends the work in ethereal serenity.

For all its similarities with Beethoven, however, Dvorak’s work stands entirely on its own, with a chromatic flavour and Romantic expressivity reflecting the later period in which it was written. Rhythmic tautness and ease of flow in the eight variations characterise Poroshina’s fine performance. Whether the melody becomes dazzlingly embellished or reserved in quietude, the music and the pianist show the composer as a master craftsman with an uncanny knack for range of drama, expression and imagination without abandoning formal structure.

The very short Polka in E dates from the time when Dvorak played the viola in a band after graduating from the Organ School in Prague. Dvorak wrote the Polka as a typical dance tune, yet the slavonic elements in his music are unmistakable.

Silhouettes, though listed as Op.8, is a collection of twelve short pieces completed in 1879. Dvorak recapitulates the relentless rhythms and folksy melodies of the hugely successful Slavonic Dances written a year earlier, with the modulations and major-minor inflections which made his Dances so unique and catchy. 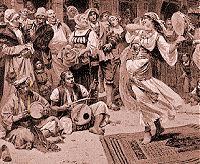 Opening with a dramatic rolling flurry, the twelve pieces paint a gamut of acoustic pictures, from fleeting fingerwork to furious foot-stomping to countryside idyll. References to the starting theme attempts to wrap the set into a more coherent whole, but no development is evident and the set simply forms a loose sprinkling of stylised miniatures. Dvorak never left any note or any intended programme regarding the meaning of the Silhouettes.

The Two Minuets Op.28, rather than being minuets in the Mozartian style, are simply Chopinesque waltzes for piano, imbued with Dvorak’s own individual melodies and slavonic harmonies. New material appears one after another to form a continuous reel, rounded up by a restatement of the opening sequence in both works.

The dumka (plural dumky), originally a piece of Ukranian folk music, has been used by 19th-century Slavonic composers to refer to a melancholic and ruminative lament. Dvorak came to be known as the most prominent of the Bohemian/Czech composers who were associated with writing dumky.

In his Dumka Op.35, he starts with a simple lament in D-minor and repeats it interjected with different secondary themes. Each repeat is taken with a different ornamentation, getting more elaborate as the piece progresses. The second theme, in B-flat major, enters with a sunny rambunctious rhythm, only to have the depressive main theme return. The third theme, in G major, seems to be a soft smile punctuated by an angry G minor middle section. Finally, the main theme returns for the last time, in a richly-decorated chordal version. The last minute of this work is given to a D pedal note in the bass while the melody billows and flutters with the delicacy of an Arabian veil. This evocative piece certainly deserves more exposure.

As my fellow reviewer Johann has noted with regret in his review of a Lyadov recital (from ESS.A.Y as well – see here), no mention is made of the performer in the liner notes (written by Kevin Bazzana, with the pages arranged in a rather odd order). Pianist Inna Poroshina has a sure and clean technique and just enough pedalling not to smudge the quick and quirky harmonic changes in Dvorak’s slavonic music. With her brilliant strength and clearness of expression contrasted with a breathtaking delicacy of touch, Poroshina shines a bright beacon into this hidden cache of delightful little gems, and brings us a whole vista of pianistic enjoyment.