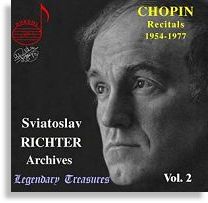 Not many people know that Sviatoslav Teofilovich Richter (1915 – 1997), besides being one of this century’s greatest pianists, was also an amateur artist, painting watercolors and drawing charcoal sketches of locations he had visited on tour. Not many people know, also, that he was originally slated to become a conductor, but found the piano more suited to his tastes instead. These two factors come very much into play when analyzing any of his playing, and this new release by Doremi is no exception. 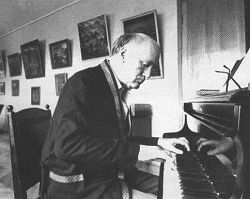 Being a painter, Richter surely knew what the purest intentions of making art were, and this is clearly evident in this CD. His unique artistic vision (he was often deemed, like Chopin was before him, the “poet of the piano”) provided him with a distinct idea of the music he played. No two Richter interpretations are ever the same, much like no two paintings of the same subject by an artist are exactly the same. And being trained as a conductor, Richter knew the driving force behind the music he played, something that became his trademark. Indeed, after hearing him in 1958 Van Cliburn remarked that “this is the most powerful piano-playing I have ever heard”! His driving rhythm, clear idea of the forces at play, and unique concept of the music and how it should be interpreted by his deft, swift fingers gave Richter a status that is legendary today.

All the Chopin recitals on this disc are ‘live’ recordings, ranging in dates from a Warsaw concert in 1954, a Carnegie Hall concert in 1965, a Helsinki concert in 1976, to a 1977 Salzburg event. The pieces chosen are rather non-standard by the yardstick of Richter’s other releases: here he performs the Four Scherzi, the Polonaise-Fantasie (Opus 61), the Barcarole, the Three Waltzes of Opus 34, and various Mazurkas. Richter, when playing Chopin, usually drew his personal favorites from the études, preludes, nocturnes, etc. Rarely would he perform a complete Opus, or a complete set of pieces, be it the Ballades, Scherzi or Imprompti, so this release is something of a curiosity.

I should first begin with a very interesting cautionary: this is the ONLY CD of Richter, among the score or so ‘live’ CDs I have heard, where he makes mistakes. Yes, you read that correctly! In the Scherzi, in particular, he misses notes, and has a few awkward transitions from section to section.

This is most obvious, as the liner notes mention, in the B minor Scherzo – in the second statement of the introductory arpeggiations beginning at 0:46 in the piece: he mashes several notes at once as it climbs, misses several more during the ascension, and at the climax totally misses the intended keys. Instead, he crushes out some other sounds far from the written ones; curiously, the effect is not one of embarrassment or shame, but instead passion! 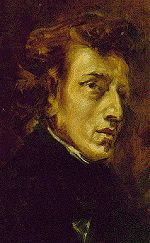 Rarely have I heard bad mistakes from a serious master of the keyboard and thought to myself “even the way he makes mistakes is good!”. In this instance and others, his mistakes add to the boiling, surging drive of the music, as if for one brief moment all chaos had broken loose from the pages, from Chopin’s very heart, and made its way to Richter’s fingers! This “hell breaks loose” atmosphere is very reminiscent of the horrid mistakes Rubinstein made during his playing of Chopin’s “Heroic” Polonaise (Op.53) during the Carnegie Hall Anniversary Concert: and how little those mistakes mattered. In other pieces on this recording, Richter seems to get so enthralled by the emotive qualities, the rush of the music, that he looses track of what comes next, and a note or two will go astray or be delayed, or a section will come awkwardly. However, the way he makes his mistakes overrides any derision we could bestow upon him for making them at all.

Getting past all that, his playing is sheer brilliance. I have only heard one other performer play the B minor Scherzo with such ferocity: Vladimir Horowitz (who interestingly enough was also deemed “Poet of the Piano” by several critics). I will review this piece and Richter’s playing in general by a comparison to Horowitz’s treatment. Even if you have not heard Horowitz’s renditions, bear with me for I will explain not sonic details but the general feel of the music, the attitudes and theories behind their approaches.

The first two infamous chords of the Scherzo, the Opus 20, are approached in very similar manners by both Gods of Ivory and Ebony: explosive! With Horowitz we hear them crash out from the silences and our muscles tense up invariably; with Richter on this recording, playing in the great expanses of Carnegie Hall, the chords are a bit more massive, less lean, and resonate more heavily, like gunpowder smoke after cannon fire.

The next section as played by the two is amazingly different and similar at the same time. Richter takes a large-scale approach, as if it were a symphony, and breaks the music down into sections each with its own motive and emotional theme; Horowitz takes the opposite road with a very intimate feeling section, where the music is not broken down into section, but note-by-note, each having its own purpose. Yet the emotions and moods brought forth from the page by the two are strikingly similar. Chaos unbridled and disruption are prominent. While any pianist able to play this piece can bring those forward, these two can more than any other.

The lyrical middle section with Horowitz (right) is reminiscent, strongly, of a nocturne. In Richter it is a passing phase, as if the clouds opened for a moment during a storm; they both find tranquility but for different reasons: Richter integrates it into the rest of the piece through its “temporary” feel, while Horowitz separates it to contrast the war from the peace.

The return of the main theme is treated very similarly by both pianists, and it is not until the final 50 bars or so where the differences can be approximated: Horowitz sees the conclusion as apocalyptic, the chords are conclusive and dark, violent and disturbing, and the scale before the end-cadence is furious and no-holds-barred. Richter sees the end as dramatic but not to the same eschatological degree, his chords are thunderous but they have lightening, his scale is fleet, hatred with measured wings, and his end-chords do not break the earth. Clearly, he feels there is some limit to the music while Horowitz does not.

Here is another of Richter’s trademark clearly evidenced in these recitals: his restraint. Perhaps his training as a conductor showed him how discordant and unmusical an orchestra out of control could be, and this applied itself naturally to his playing. Because of this it is so interesting to hear him play certain pieces at breakneck pace (the F major Waltz, or parts of the F major Mazurka) … but perhaps more interesting to hear him almost audibly restrain his playing (as in the C-sharp minor Scherzo or the Barcarole). It displays an incredible maturity.

Horowitz was all-out, wild, imaginative and divinely raw; he was rarely, rarely restrained, at least not until the last phase of his life. Richter always is, and so perhaps it can be more cathartic to hear him break from this and play such heart-rending music when he usually holds back. I will not judge which approach is better, but Richter’s is probably the more traditional, and would appeal to more listeners, as well as satisfy those seeking a recording close to what Chopin would have intended. 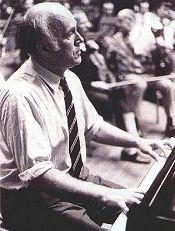 Now a moment about the sound of the recording. Since all of the pieces were first recorded in mono and digitally transferred to this 20-bit CD, the concerts do sound dated but the piano has a rich timbre and is not lacking. Jacob Harnoy is credited with remastering and restoring the sound, and he does a fabulous job. A true test of a sound engineer in the world of Classical Piano is whether the sound detracts enough from the performance A) to distract the listener B) to note when telling other people casually of the recording. Here neither A nor B applies.

For any Richter enthusiast, collector of great Chopin recordings, or classical piano fan in general, one could do much much worse than with this new gem! The Munich 1977 Concerts, difficult to obtain, are also recommended. To hear this legendary performer play this timeless music is something more than a pleasure: it’s a rare privilege. Noteworthy for its imperfections of technique and perfection of approach and mood, in this CD can be evidenced Richter’s creative, artistic side balanced by his restrained conductor’s sensibility. A true classic collection of recitals.

If you are in Singapore, Naxos discs can be found at or ordered from Sing Discs (Raffles City), Tower Records (Pacific Plaza & Suntec City), Borders (Wheelock Place) or HMV (The Heeren).
Evan Stephens is currently avoiding yet another Computer Science project. Cursed C Language!