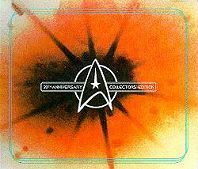 For many fans, the definitive music of the entire series is still the fanfare that kicks off the first feature film. Such is its popularity that only recently was the soundtrack re-released as part of a double-disc 20th anniversary set with eight additional tracks totalling an extra 25 minutes of music. Furthermore, the tracks have now been chronologically rearranged so that they appear as in the movie. A new set of liner notes has also been included, which is a great introduction for newcomers to the music.

(The “bonus” album on the set, “Inside Star Trek”, also previously unreleased on CD, contains interviews and discussions about the show by many of the stars from the original series, including an appearance by the late Mark Lenard as Ambassador Sarek. It should appeal greatly to fans of the original series as well as collectors of late-60s American kitsch.)

This reissue had been in the works for many years, as the producers dithered whether there was sufficient demand to make the venture worthwhile. They needn’t have worried. Fans were not satisfied with the original offering – running a paltry 40 minutes – which was but a small portion of the wonderful musical tapestry which Jerry Goldsmith (right) wove together to bring the show to the big screen ten years after the original series ended. The recent Internet boom only served as a very vocal medium from which their calls for an expanded soundtrack resounded.

From the heroic timpani-and-brass call-to-arms that opens the movie a la Star Wars to the string-washed lyricism of Ilia’s theme, or the bizarre synth-laden V’ger music (augmented by an instrument/sound/whatever called the “blaster beam”) to the brutish Klingon battle theme containing Prokofievian percussion and otherworldly sound effects, Goldsmith’s music invoked and encapsulated the emotions felt by fans all over as they renewed acquaintances with familiar faces of the show, as well as the new Enterprise (spiffed up considerably in transition from television to feature film), as they set forth on a big screen adventure to confront the machine intelligence V’ger that threatens to destroy Earth. 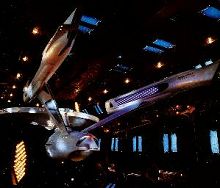 In the scene where the newly refurbished Enterprise is presented to the audience for the first time after a ten-year interval, in a series of glimpses of the vessel through a spacedock construction lattice before finally revealing the entire starship, Goldsmith’s gentle reworking of the main theme that accompanies the visuals is reported to have reduced fans to tears. It was also this scene which definitively associated with the main theme with the starship, becoming a leitmotif that would occur again throughout the series, both on television as well as movie.

This reissue has also been impressively remastered, cleaning up a lot of the obvious flaws from the original LP/MC/CD release (which, incidentally, has since been withdrawn) although the strings are still rather bright and the percussion curiously mixed down. Still, despite its age, the merits of the music (plus a Oscar nomination for Best Original Score) speaks for itself as a classic, not just for fans of the show but for any film music collector. Of course, for Trekkers who are old enough to remember, they would have formed a “first love” relationship with the movie and music, and this reissue will only rekindle some old flames. 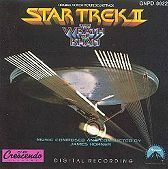 There was never any intention on the part of the producers to produce a sequel (let alone eight); indeed, that was why the first movie was subtitled The Motion Picture. But when it made a ton of money at the box office, the producers knew they had a golden goose on their hands.

The Wrath of Khan itself was a meta-sequel to one of the original episodes, “Space Seed”. Director Nicholas Meyer wanted the film to have a nautical, swashbuckling feel to it, in keeping with the story’s thinly-veiled allegory and multiple literary references to Moby Dick (including some lines verbatim from Melville’s novel) as the eponymous villian, Khan Noonian Singh, is driven to wreak vangeance on his archnemesis, Kirk and the Enterprise.

A pre-fame James Horner delivered a soundtrack that was awash with high adventure: a broad, sweeping horn melody for the main title, with the accompanying “action” tracks punctuated with what would later become his unmistakable signature: rasping sidedrums, quirky time signatures, sustained trills and disonant crashing chords.

(It was also this rather immutable style which has elicited comments from Horner’s critics that “when you’ve heard one Horner (score), you’ve heard them all”, a reference to how all his tracks tend to sound the same – note for note.)

Goldsmith had the audience reduced to tears of joy with his music for the Enterprise; Horner (right) repeated this feat with his noble theme for Spock, who sacrificed himself in the movie’s climatic ending to save the starship and her crew – even to the point of inserting a maudlin bagpipe rendition of “Amazing Grace” into the music for Spock’s funeral service (although this cue didn’t make it onto the disc, for some reason).

In any case, like his predecessor, Horner has produced a classic soundtrack that fit the mood and feel of the movie like a glove, one that bears repeated listening to. Surely, one of the big litmus tests for the durability of a film’s music outside the movie itself. This disc – unarguably – showcases early Horner at his best. GNP/Crescendo also deserves commendation for including a synopsis of the movie and Horner’s biography in the liner notes, a documentary ingredient conspicuously absent from other non-GNP/Crescendo Trek albums. 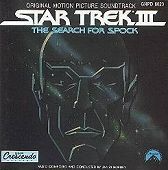 So they killed Spock in The Wrath of Khan, thinking that that would be end of it. Guess what ? The movie made two tons of money at the box office and part three was thus born, picking up where the previous one left off.

It was therefore only logical that James Horner was retained to score the third installment of the Star Trek feature series. Many of the tunes were retained from the previous movie but the mood was transformed, becoming more sombre and melancholic, in keeping with the unfulfilled death of Spock still fresh on everyone’s minds.

Horner did write some new music for this score, but only just. After Goldsmith used a menacing brass motif supported by unorthodox percussion effects for the Klingons in Star Trek: The Motion Picture, Horner reinvented his own theme based on that concept, resulting in a brutish hunting call that didn’t quite achieve the same effect. (How many ways can your thesaurus spell “rehash” ?) Even worse, the score was also heavily littered with percussive licks and rhythms that, on plain listening outside the movie, are headache-inducing.

(It is also worth a mention here that Horner’s Klingon theme can also be heard on his other soundtracks for Aliens and Wolfen; ditto the climatic mind-meld sequence with Brainstorm.)

Nonetheless, two tracks on this disc deserve to be singled out, although for diametrical reasons. “Stealing the Enterprise” is a pulsing orchestral showpiece along the lines of “The Asteroid Field” from The Empire Strike Back or “Journey to the Island” from Jurassic Park that paints a thematic tone-picture of the action on screen, capturing the listener’s imagination so vividly that one doesn’t realize how fast the movement, lasting nine minutes, has flown by.

“The Search for Spock”, on the other hand, comes on the final track, a diluted pop-synth version of the main theme, which leads one to wonder what this “disco Spock” mix is in aid of – and especially since this number (thankfully) doesn’t appear in the movie at all. This is all the more exacerbated by the fact that the cues for the pivotal destruction scenes of the Enterprise and the Genesis Planet were, for reasons known only to GNP/Crescendo, omitted, to the anguish of fans all over.

For the collector, this disc is best recommended as “try-before-you-buy” – listen to “Stealing the Enterprise” and decide if that is worth the asking price. If there’s something there, chances are it’ll grow on you. Otherwise, it’s just less of the same from the The Wrath of Khan score.