Leonard’s Bernstein‘s gift for composing music for the stage is commonly associated with the deeply satirical Candide (1956) and West Side Story (1957). But before this, and before Lenny became the Maestro with the New York Phil, was the youthful, energetic On the Town (1944) whose success made its composer a legend in Broadway. On the Town is pure fun, pure frolic and pure Lenny. Strip away all the “serious musician” contentions and here was Leonard Bernstein in his element, music filled with that infectious personality that anyone who knew his work would have felt. 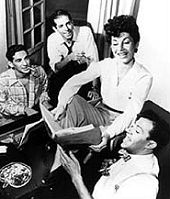 The year of On the Town‘s premiere is significant of course; America was in the midst of the Second World War. The musical’s central characters – Gabey, Chip and Ozzie are three sailors on 24-hour shore leave in New York, painting the town red with their romantic pursuits and misadventures. It’s a common misconception that On the Town is based on Fancy Free, a ballet that was premiered in the same year. Other than the composer, choreographer, set designer and the premise of the three sailors chasing women in New York City, On the Town is a completely different thing. Seeing that the ballet was hardly done exhausting the dramatic possibilities of three young Americans trying to find love and romance in the big city before being shipped off to war, Betty Comden and Adolph Green joined in as collaborators to create an all-new piece.
Above right: Leonard Bernstein, Jerome Robbins, Betty Comden and Adolph Green.

The result was a triumph of song and dance, joyful yet serious as our heroes leave their newfound lovers to go to war, their return clouded in doubt as they sing the wistful “Some other time”. Now, there’s a way to talk about the war without resorting to epic war scenes filmed with violent realism.

Bernstein’s enthusiasm regarding the American musical theatre is summed up in an article in his book, The Joy of Music: “an art that rises out of American roots, out of our speech, our tempo, our moral attitudes, and our way of moving. Out of all this, a new form has been born.” In retrospect, Lenny was right about the potential of this genre. Musical theatre has taken the world by storm. While some lament the lack of the talent that the early years had like Gershwin, Porter, Loesser, Rodgers, Styne and many others, this new genre has made the combination of words and music that opera has championed for so many decades more accessible to the masses. On the Town is certainly dated to wartime New York, on issues that are less relevant to Americans now, much less to the rest of the world (or maybe not!). But the music is as infectious as ever. Music that will make you feel like you want to get up and dance, sing along, as modern day musicals seem to find unfashionable. 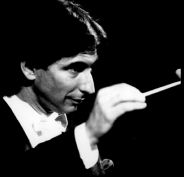 This recording of a staged revue of On the Town is a revival of sorts, championed by LB’s one-time protégé, Michael Tilson Thomas (left). A tribute to his mentor, while winning a Grammy award in the process, MTT demonstrates his versatility and his finger on the pulse of American music. It featured Comden and Green as narrators while a stellar cast from the Classical and Broadway stage took on the lead roles, accompanied by a surprisingly brilliant London Symphony Orchestra and Chorus. No makeshift Broadway cast or orchestra would be versatile enough to handle this music. Lenny has written almost all kinds of music in the score: “That Prokofiev stuff” that is the ballet music, those jazzy numbers like “New York, New York”, the pseudo-operatic “Carried Away”, hot Latin-American Jazz in the nightclub scenes. The score has just about everything, and for LB, that was probably his idea of fun.

For the LSO, it became a showcase of amazing versatility and virtuosity, handling the symphonic moments and the jazz as if it were two different orchestras playing. The LSO has shared times with Lenny, and I’m sure are equally attached to the man through their numerous successes together. The “Subway Ride and Imaginary Coney Island” orchestral interlude with the Pas de deux (ballet music) reveal an orchestra that is both sensitive to the borrowing from jazz that Lenny has used, and the rich orchestral texture that Lenny knew so well is fulfilled to its maximum potential.

MTT’s dramatic timing is no less acute than that of his mentor, pacing the music perfectly to maximize effect. If LB’s dance music is described as Prokofievian, it must be because of it is “edgy, powerful, rhythmic and somewhat shrill”. The rhythmic corners that the music must maneuver around are executed with such fluidity that must credited must be given to both conductor and orchestra. This is dynamic stuff, Bernstein undoubtedly writes the best dance music for the musical theatre. And with a choreographer like the late Jerome Robbins on the job, I really wish I could have seen it.

ONE OF the awkward, yet interesting things about this performance is the use of both Broadway singers and classically-trained singers. One can immediately tell from the quality of the voices which is which, especially since the casting called upon some of the most talented American singers like Frederica von Stade, Samuel Ramey and Thomas Hampson on one end, and Tyne Daly, Kurt Ollman and the jazz diva Cleo Laine on the other. The result is quite mixed actually.Samuel Ramey contributes his strong, baritone voice as the announcer and as Judge Pitkin – singing the hilarious “Pitkin’s Song”, which is one of the real highlights of this disc. Tyne Daly gives the top act on the other extreme with “I Can Cook” with her bright, nasal voice that is so outstanding. While von Stade displays her talent in various moments, especially her range in “Carried Away”, she shows signs of discomfort in this jazzier medium. Partnering with David Garrison, a comparatively weaker vocalist but someone who knew how to make the words and music work to comic effect, the song’s mock-operatic style worked rather well. Look out for Cleo Laine’s guest performance on the track “Ain’t got no tears left” with music and lyrics by LB, in a jazz trio arrangement by MTT featuring himself on the piano and virtuoso John Harle on the saxophone. The acclaim that Laine is well justified by her impeccable reading of this song despite a voice that has probably been weakened by age. Still that distinct and unique sonority is unmistakable, and a quality has made her voice recognizable to millions.

While Ethan Mordden in his liner notes gives a detailed analysis of Bernstein’s music that should be appreciated, I think much of the merit is in the uninhibited element of fun that pervades the music and performance. That is something that we can all enjoy. The ‘bonus’ track on this CD perhaps highlights the spirit of this musical ‘game’ that is both satirical and extremely humorous. Here’s the last line:

“Opinions seem to differ, and that’s why we’re in debate! We dun know about the show, but THE INTERMISSION’S GREEAAATTT!!!”

I don’t know about the intermission when we’re listening to a CD but trust me, the shows great too!