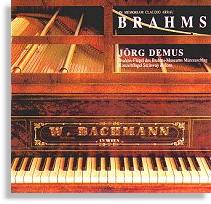 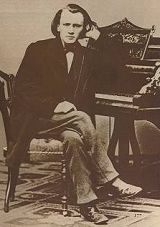 UNUSUAL TIMBRES
Johannes Brahms was fortunate: his creations outlived him and will outlive us. We, too, are lucky: though he couldn’t see into the future, we can hear into the past. A 2-CD set brought out by the Austrian Brahms Society now affords us the opportunity to hear the sounds Brahms himself heard. The word special might best define this recording.

Made especially for the Society, the digitally recorded CDs contain many Brahms piano works, and a piece by Liszt (the Sonetto del Petrarca Nr.123 in A-flat major), all performed by Austrian pianist Jrg Demus.

Among the 34 selections on the CDs are Brahms’ Seven Fantasies op.116, the Three Intermezzi op.118, the Four Piano Pieces op.119, selections from the Three Intermezzi op.117 and from the Piano Pieces op.76, the Two Rhapsodies op.79, the perenially popular Waltz in A-flat major op.39 No.15, and Max Reger’s arrangement of the Wiegenlied op.49 No.4, by title and tune best known as “Brahms’ Lullaby.”

There is still more – What makes this recording unlike others and almost unique is that half the selections are performed on a concert grand piano made around 1850 by Wilhelm Bachmann of Vienna. That the music is played on this instrument makes these CDs a literal record of what Brahms himself heard: it’s the very piano he often played during the summers of 1884-85 in Mrzzuschlag, Austria (not far from Vienna), where he composed his Fourth Symphony in E- minor, op.98. Remaining selections on the CDs are rendered on a modern Steinway grand. 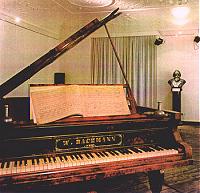 Left: A Bachmann piano contemporary to the one used in the recording.

Thus resurrected on this recording are the sounds of an era long gone. With many of the same pieces performed by Demus on both instruments, the recording offers a rare and incredibly fascinating kind of comparison listening and study, allowing us to compare the timbres and effect of the two pianos.

The album’s explanatory title, In Memoriam Claudio Arrau, was prompted by special corresponding circumstances: the making of the recording, and the inauguration of The Brahms Museum. While Brahms Memorial Rooms exist in several Austrian locations (including the Haydn Museum in Vienna and the Kammerhof Museum in Gmunden), the Dietrich House in Mrzzuschlag, where Brahms lived during his stay, was acquired by the Austrian Brahms Society, and in 1991 the building became the world’s only Brahms museum. It has more authentic Brahms mementos on permanent display than in any other location.

While the piano’s keyboard remains intact, some of the instrument’s interior was rebuilt and restored in 1990-91 by Alfred Watzek of Vienna, specialists in historic instruments. It was they who in 1979 restored the Heinrich Elwerkember piano used by Schubert (but owned by his brother, Ferdinand) during the last year of his life, and which is now in the Schubert Memorial Rooms, then Ferdinand’s apartment, at Kettenbrckengasse 6 in Vienna, where the composer died in 1828. 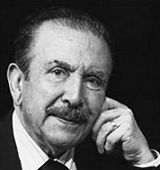 Chilean pianist Claudio Arrau (right) died at 88 on June 9, 1991, two days after he was to have inaugurated the Brahms Museum at a gala concert.

Jrg Demus, in Mrzzuschlag for the event, agreed on short notice to play the recital and to make the recording in honor of his late colleague.

Demus set the example for the recording by playing both the Bachmann and Steinway instruments at the recital. He has also recorded Schumann on period instruments, and Beethoven on the composer’s own Broadwood and Graf pianos, when the Broadwood was brought from the Hungarian National Museum in Budapest especially for the 1970 bicentennial performances at the Beethovenhalle in Bonn.

Older music had a particular fascination for Brahms (he edited the works of Handel, among others), and his own music is a near-ideal combination of Romantic substance clothed in traditional formal garb.

His fondness for the older forms is not only manifested in the structure of much of his music (in particular the last movement, a massive passacaglia, of the symphony he composed in Mrzzuschlag), but is also represented on these CDs with the A-major Sarabande, and a Gavotte in the same key, based on a theme by Gluck (who, interestingly, lived in Vienna not far from where Brahms did nearly a century later). Fittingly, these pieces in the older forms are played on these CDs on the older instrument.

In Memoriam Claudio Arrau – a 2-CD set, available exclusively from the Brahms Museum, Wienerstrasse 2, A-8680 Mrzzuschlag, Austria, phone (43) 38 523 434, priced at 500 Austrian Schillings (which includes airmail costs). For any music lover generally, for any historic instrument enthusiast specifically and for any Brahms devotee in particular, the ordering and acquisition of this recording is, in a word, recommended, and is worth the effort. Like the study of the composer’s music, the rewards are many and great for those who seek them.

In Memoriam Claudio Arrau is available exclusively from The Brahms Museum (Wienerstrasse 2, A-8680 Mrzzuschlag, Austria), at the price (including airmail) of 500 Austrian Schillings. Visit the Brahms Musuem website for more details.

Jeffrey Dane has a marked tendency to develop an almost emotional attachment to the composers, living or not, whose music he studies. He’s been called by some a real idealist and by others an ideal realist. Both are right.