No.3: Allegro molto
No.4: Allegro assai

Since winning the 1990 Tchaikovsky Competition, Boris Berezovsky has been recording exclusively for Teldec, putting to disc many works worthy of interest to the avid collector of piano music. In recent years he has won the coveted German Record Critics Prize in 1992 for his Variations on a Theme of Chopin by Rachmaninov (on Teldec 4509-90890-2) and in 1994 for the Chopin Etudes (Teldec 9031-73129-2) – two of my desert island discs! He has also recorded a considerable range of music from Rachmaninov’s Piano Concerto No.3 to Lizst’s Piano Concerti to the Transcendental Etudes and other solo works by Ravel and Schumann.

This time he has returned to playing works close to the Russian heart: Mussorgsky, Rachmaninov, Balakirev, Medtner and Liadov. When one talks of virtuoso Russian pieces it includes a surprisingly long list of very distinctive composers who are not well known, if at all. Try those of Lyapunov, Rosvalet, Glazunov and even Arensky, who was Rachmaninovs teacher. More on the prominent side are works by Tchaikovsky, Rachmaninov, Scriabin and Prokofiev.

Most people will immediately associate the name Mussorgsky (right) with Pictures at an Exhibition. But on this disc, Berezovsky does not opt to play this mammoth work but chooses instead the transcription of A Night on the Bare Mountain. Judging by the “Allegro feroce” marking one can immediately sense that he has chosen these works carefully to display his dexterity on the piano. And going by the huge response he received during his performances in Singapore, playing Brahms’ First Piano Concerto, along with a solo recital, it is not difficult to marvel at his pianistic virtuosity, a la Marc-Andre Hamelin. 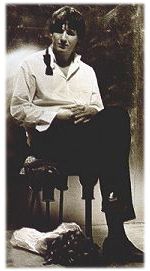 One can argue that nowadays virtuosos are a dime a dozen at the Moscow Conservertore, but I think Berezovsky stands far ahead of most. Just listen to the short and relatively-unknown Liadov Preludes on this CD. The impression is that he is able to bring out from them an “inner feeling” where many simply just “play” the music. A towering pianist with huge fingers, he is able to draw from the piano the depth of sound needed in playing Medtner’s Fairy Tales. His piano runs are superb – the evenness of his left-hand runs allows him to bring out the main melody of the right with great conviction.

It is interesting to note that except for the Rachmaninov etude tableau op.39, no.7, marked “lento”, the other works he has chosen to record here are highly spectacular pieces with exceedingly fast tempi – Balakirev’s Islamey is marked “Presto Con Fuoco” (“fast with fire”) and Medtner’s Fairy Tales “Allegro molto vivace” (“fast and very lively”), just to name a couple of names.

This disc sparked in me interest in some lesser known composers, and this is one of the best things about buying a new CD! Although Berezovsky (left) performs just 3 preludes by Liadov, whom I’ve never heard of, the curious mixture of Chopin and Scriabin, both champions of short pieces, proved to be highly facinating. I was immediately drawn to this composer for his introspective melodies which are not sad and dreary but possessed a tension that made one want to hear more.

I am not familiar with the music of Nikolai Medtner (right) except for the recordings made by Demidenko and Marc-André Hamelin. However, after listening to this disc, I have come to realize that this composer has lived in the shadow of many of the “Greats” and is only now getting the exposure that is due to him. One is pleased by the palatability of his music, which is thankfully not long or dreary. Still, I was quite disappointed with the performance of the Etudes tableaux as it lacked panache and should not have been treated as warm-up exercises. Perhaps due to the technical concentration required to play difficult pieces, Berezovsky sometimes has a tendency to play them without feeling, even with ease.

Anyway, I do not think that we should dismiss his Rachmaninov by any means as he has already performed well on record. This CD is truly worthy of its German award. After listening to Cyprian Katsaris and Santiago Rodriguez (on Elan CD82248) you will understand what I mean. I wait in anticipation for Idil Biret’s version on Naxos, which has yet to be released.

Overall I would say that this disc provides the listener with fresh insight into music seldom played which few pianists would even consider recording. If you enjoy listening to Russian music, especially their piano music, I would highly recommend this disc as an introduction to the lesser-known Russian composers.

This disc is available at or can be ordered from Tower (Pacific Plaza & Suntec City), Sing Music (Raffles City), Borders (Wheelock Place) or HMV (The Heeren).