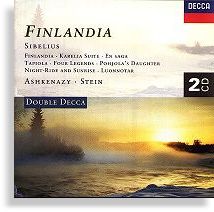 Recorded 1972-86. No libretto provided for Luonnotar

This is a very welcome collection of some of Sibelius’ popular tone-poems, nearly all inspired by the Finnish national epic, the Kalevala. The first disc is a reissue of an identical mid-priced Decca Ovation disc (430 757) . Ashkenazy is a well-versed Sibelian who has recorded a very fine cycle of Sibelius symphonies for Decca (421 069), albeit with a warmer, sunnier flavour. Finlandia (1899) and the Karelia Suite (1893) benefit greatly from these warm orchestral colours. The former boasts a smashing timpanist, richly precise brass and sensitive dynamics, while the recording creates a beautiful sound picture with satisfying balance, showing the strings in impressive detail — listen too for the tuba and triangle, and even the bass drum roll during the “Finlandia Hymn” is audible.

The Karelia Suite begins with a marching Intermezzo, here performed with unflustered trumpets leading the orchestra in a rousing performance. The central Ballade depicts an old king reminiscing in his castle, listening to a bard singing a melancholic song. The strings of the Philharmonia Orchestra sing out all their parts in beautiful detail – just listen to the clean and clear undulating celli figures. The plaintive oboist is matched by the moving cor anglais solo with the softest vibrato, and the seamless way the flute takes over its swansong is very satisfying indeed. The suite ends triumphantly with the Alla Marcia, depicting an army marching to battle.

Luonnotar (1913) is a tone poem for solo soprano and orchestra. Elisabeth Sderstrom’s rather wide vibrato may not suit everyone’s taste, just as Ashkenazy’s predominately Slavic flavour in the symphonies would not. Yet, listening to this performance, I thought it brought out an appealing florrid and even operatic aspect to the score. Listen to the Wagnerian progression of tunes on the strings, or the flutes fluttering expertly around 3’42” or 4’04”, Sderstrom’s high note at 3’48”, with the strings shimmering in the background, the harp flourishes… too bad Sibelius only composed a single (one act) opera.

Tapio is the Finnish mythological god of the forests, Tapiola (1926) Sibelius’ last and greatest tone poem: a huge orchestral paean to the Finnish forests in all its glittery darkness — but it is not so much a depiction of the forest, or of Tapio, but an expression of being a forest. This utterly indescribable 18-20 minute work, which literally grows from a single motif heard at the beginning, demands great concentration and unity of performance, from the misty unfolding of the forests’ twilit canopies to the soul-searing storm to the very sound of the trees breathing at the end. Ashkenazy’s performance here is well-rendered, with adequate detail and colour, though to me it loses concentration at the end, and cannot match the greatest performances such as Karajan’s 1984 recording on Deutsche Grammophon. En saga (1892, “A Journey”), likewise, contains no narrative storyline but is simply a musical expression of the “Finnishness” of Sibelius’ homeland. The 20-minute work alternates between lush string “journeying” themes (a Sibelius hallmark), pastoral woodwind folk-dances and brassy outpourings. Ashkenazy’s rendition of this early tone poem is simply the most magnificent I’ve ever heard, excitingly dramatic to the extreme, with an impressive palette of tone colours.

Disc 2 begins with another “travelling” tone-poem Night Ride and Sunrise (1908), depicting a horseman’s journey through a shadowy landscape, with its relentless rhythm of the horse’s hooves, cries of some soaring bird in the sky, and even occasional percussion whacks which seem to depict the horse leaping over some obstructing rock or bush. The rider seems to ride nowhere, his journey ending with the sunrise, softly heralded here by L’Orchestre de la Suisse Romande. The tone poem is like a softer, though not in any way less majestic, version of the equally relentless finale of Sibelius’ second symphony.

Pohjola’s Daughter (1906) tells of how the hero Vainaimoinen is on his way home from the Northland when he meets the beautiful maid of Pohjola, seated by a rainbow at her spinning wheel. Unable to end his insistent wooing, she sets him on a number of Herculean tasks such as tying an egg into invisible knots. Though he succeeds many times, his limits are eventually reached and is forced to leave. The “symphonic fantasia”, as Sibelius called it, is striking more for its symphonic architecture rather than the storyline, as well as the beautifully heart-breaking opening cello solo.

More mythology comes in the Four Legends from the Kalevala (1893-95, with later revisions), sometimes refered to as the Lemminkainen Legends. The first legend, Lemminkainen and the Maidens of Saari depicts the hero’s seduction of an entire island of women. The famous Swan of Tuonela has its roots in the Four Legends. Tuonela is the Finnish mythological land of the dead, where the Black Swan swims majestically on the River of Death. The work bears many of Sibelius’ stylistic hallmarks, including tremolo strings, the assymetrical cor anglais melody and the concentrated argument of musical material. 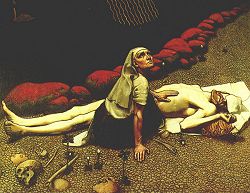 In Lemminkainen in Tuonela, the hero tries to kill the Swan, but is himself killed by a herdsman from the Northland. The sun tells Lemminkainen’s mother of his death and that his cut-up remains have been thrown into the river. With the help of a giant rake she retrieves the body and restores him back to life (see painting by Gallen-Kalela, a contemporary painter of Sibelius’). The work is characterized by brass outcries and twisting, skittering string passages with strange and lonely woodwind cries, as if depicting the mysterious underworld. The quiet section in the middle seems to depict Lemminkainen’s mother sewing back her son’s body with magical incantations. The final legend is another exciting and highly propelled “journeying” piece, depicting Lemminkainen’s Homeward Journey.

The performances on the second disc are often very atmospheric — some are of very fine quality indeed. At times the recording lacks front-to-back depth, and this seems to rob the music of its intensity. The playing is occasionally a little understated and not exactly tonally refined. But for a one-stop collection of these works, at budget-price, this is perfectly adequate.

These discs are available at Sing Music (Raffles City), or can be ordered from Tower (Pacific Plaza), HMV (The Heeren) and Borders (Wheelock Place). Say the magic words “The Flying Inkpot” to Doris at Sing Music and get $1 off these sets!

When the wind blows, the Inkpot Sibelius Nutcase tries to listen to the trees talk.