An inktroduction by Benjamin Chee 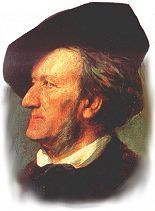 Tannhäuser und der Sängerkrieg auf Wartburg (“Tannhäuser and the Singing Contest on the Wartburg”) is the longest title Wagner ever gave to an opera; today most sane people simply call it Tannhäuser.

It is also one of the shortest by Wagnerian standards, lasting only three acts each about an hour long, and also the most spasmodic: it was this opera Rossini was talking about when he made his comment that “Wagner has lovely moments but awful quarters of an hour.” There are, as with the other Wagner operas, long stretches that makes the attention wander, but the barren patches are never too long in Tannhäuser. There are hummable tunes that pop up whenever things get too slow, not to mention a great chorus of pilgrims, great arias for the soloists and castanets in the raunchy ballet that curtain-raises the work.

The story is pretty straightforward as Wagnerian opera goes, the story of a man caught between two conflicting ideals of women: depraved wanton versus saintly virgin. (You can probably tell already who’s going to win, this being a 19th-century work.) The setting is a cornucopia of several legends, the characters a mix of historical and fictional. The result is, as the subtitle of the opera goes, a Great Romantic Opera in Three Acts, including a sexual orgy, sacred love, knightly duels, court processions, built around the bipolar theme of fall-and-redemption, which makes it easy to understand even for newcomers to opera and one of the more popular works in the Wagner canon.

(Tannhäuser, it must be said here, should also be noted for its lack of villians, as Grand Romantic Operas go, unless you count the eponymous title character himself.)

SYNOPSIS. The opera begins with the famous Pilgrims’ Chorus tune, which will appear again in several places later (it keeps the listener awake between the longeurs). The overture segues directly into the bacchanale in the Venusberg where satyrs and nymphs are … er, dancing. Aforesaid castanets make an appearance in the music, which must have been absolutely scandalous to audiences of the day. 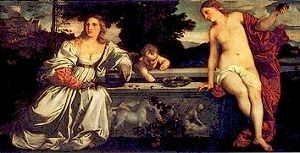 After the dancing finishes, Tannhäuser wakes up and Venus makes the fatal error of asking what’s on his mind. He tells her he is tired of her orgies in the Venusberg and wants to return to the human world. His reason is that no mortal could endure such endless ecstasy. Venus, upon hearing this unfathomable excuse, is obviously very much put out with him and tells him to leave, adding ominously that he will never find love and happiness outside her cave. He invokes the saintly name of the Virgin Mary, and Venus and her grotto disappear.
Above right: “Sacred and Profane Love” (c.1515) by Titian.

The scene around Tannhäuser changes to a valley on the Wartburg, blue skies, sheep in the distance; something to give production teams a chance to show off. A shepherd enters along with some pilgrims, who are singing about sin and penance; the shepherd asks them to remember him as they march on towards Rome, while Tannhäuser bleats about his own wretchedness. After they move off, a hunting party arrives, asking Tannhäuser where he’s been and to go back with them to the Wartburg. Tannhäuser declines, until Wolfram – knowing the power of mentioning a woman’s name in an opera – brings up the name of Elisabeth. “Let’s go,” cries Tannhäuser immediately, as the act concludes to a fanfare of hunting horns.

Elisabeth enters alone at the start of Act 2 with her aria to the hall of the Wartburg, “Dich, teure Halle,” but before long Tannhäuser and Wolfram enter. She welcomes her lost knight and quite indiscriminately expresses her feelings for him. The Landgrave enters and announces a singing contest, followed by a heap of fanfares and a lengthy processional of guests (another Wagner showstopper, more popularly used for the Presidential inspection of the guard-of-honour at National Day parades) amounting to a medieval fashion show that makes the song contest itself appear dull in comparison (you have to go to Die Meistersinger von Nrnberg for the real Eurovision-style songfest.)

Wolfram starts with a song about the purity of chaste love, embodied by Elisabeth, only to be interrupted by Tannhäuser out of turn that that form of love is weak – while he has, in fact, known the pleasures of the flesh. Swords are drawn, Tannhäuser tells them that they don’t know what they’re talking about and to shut up, before picking up his harp to sing a lusty paean – to Venus! The ladies swoon and shriek, the men advance with swords drawn, but Elisabeth calms them down. His actions have wounded her gravely and he must therefore seek salvation; henceforth he will join the pilgrims to Rome to find atonement. Tannhäuser suddenly becomes contrite, and as the pilgrims are heard again offstage, he runs off to join them to an approving chorus of “To Rome!”

Several weeks later, as Act 3 opens, Elisabeth is praying in the valley as the pilgrims return. She looks for Tannhäuser, but he is not among them. She sings a prayerful aria, “Allmcht’ge Jungfrau” to the Virgin Mary pleading intercession for her knight. This is followed by Wolfram who also sings his showpiece, “O du mein holde Abendstern”, to the evening star to guard her in her journey (whatever that means). 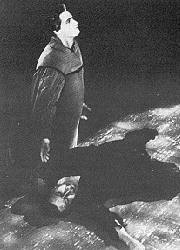 Tannhäuser finally staggers onstage in a mess, telling Wolfram he’s going back to the Venusberg since there is nowhere else left to go. In an extended passage (the “Rome Narrative”) he relates his account: having walked penitently all the way to Rome, denying all comforts, he was denied pardon by the pontiff, on account of his henious crimes of the flesh by the pontiff – not till the wooden staff in the priest’s hand blossoms with flowers, anyway.

In resignation, he calls on the name of Venus (the power of a woman’s name in opera…) and she immediately appears, gloating. Wolfram cries out Elisabeth’s name in reply, Tannhäuser makes another 180-degree change-of-heart. Venus disappears; a funeral procession appears carrying Elisabeth’s body. “Saint Elisabeth,” cries Tannhäuser, “pray for me!” He collapses and dies at her bier. Instantly, pilgrims appear singing of a miracle: a priest’s staff has started sprouting greenery. Tannhäuser is saved, and the opera comes resoundingly to a conclusion with the Pilgrims’ Chorus yet again.