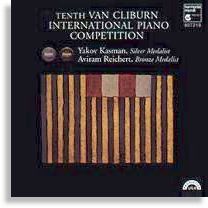 The disc of the Second and Third Prize-winners in the 10th Van Cliburn Competition (1998) make for a good purchase; the pieces are also more accessible. Yakov Kasman came into the competition with credentials few could beat – a winner at the 1992 Arthur Rubinstein Competition, he had also won the Second Prize in the 1995 International Prokofiev Competition in St. Petersburg. Trained in Russia, he possesses a technique other performers can only dream about. It is not surprising that prior to the results he was the outright favourite for the top prize. For this disc, he plays two very interesting and rare pieces. The first is the 9-minute Allegro in B minor by Schumann, which appears to bear some inspiration from Carnaval.

Straightaway one is drawn to the speed and clear articulation that Kasman (left) possesses – his notes are clear, his pedaling never at any point smudgy and he displays good understanding of the work. While I did find his performance of the Second Rachmaninov Concerto in Singapore (reviewed here) to be utterly dry and mundane, his performances on this disc are highly commendable. Kasman plays with a sense of abandonment and while the work calls for virtuosity of the highest order, he is never at any point put to the test; or rather you just do not feel that he is struggling at any moment.

I particularly enjoyed his rendition of Rachmaninov’s First Sonata. There is always a feeling that as a Russian Kasman could relate more to Rachmaninov than the other non-Russian competitors could and I believe I am not wrong. From the opening notes of the Allegro Moderato, there is a sense of heightened intensity in his playing, and this is built up especially in the second 9-minute movement.

Rachmaninov’s Sonatas call for a little more “give” in performing and unless you possess a spectacular technique and strong will, the performance can often sound utterly pedantic. Kasman always played as if he was on the edge, which gave the piece that sense that he was never playing in a restrained mode. I found this not only interesting but also that he draws you into the music so that you listen to him with greater interest. His Lento was dramatic yet not overly so, often with well thought-out phrases and clarity of vision.

This work is filled with a billion notes if you know what I mean – one cannot believe that two hands can play so many notes. The physical aspects of the work are daunting and yet, while it may be terribly difficult, Kasman (who is small in stature) was able to bring out a strong fortissimo in the loud sections.

It is such a waste that Harmonia Mundi has only issued the solo sections of the competition. They should have included the final concerto section as well – I would have loved to hear the above pianists play. There was never any overblown dramatics in Kasman’s playing and yet one felt great intensity similar to that of Nakamatsu’s.

PLACED a not too distant Third is Aviram Reichert. A top prize winner in the 1995 International Music Competition of Japan, I can only feel sorry for him that he had to meet the other two contestants in this final. I found his Chopin Nocturne slightly tense and lacking some spontaneity in the early bits.It is only in the later half of the recital that he blows the audience away with his playing. His reading of the B-minor tude makes him stand out as an outstanding pianist – it is easily the hardest of the whole set of tudes, starting off with a flourish of octave chords and not letting up until a tense middle section which Reichert gradually builds up like an incoming hurricane. Just watch out for the closing of the work where the crowd goes hysterical with their applause.

Reichert did somehow surprise me with his choice of Schubert’s Sonata in A Minor Op.143, D784. This is one of Schubert’s last sonatas and like Beethoven’s they are not only difficult to perform but difficult to express. These works are often at least 40 minutes long and this is no exception. They generally call for a mature player and one will notice that the best in the market are those the likes of Brendel, Arrau and not forgetting Rudolf Serkin – all who have recorded them in their twilight years. While Aviram Reichert did possess the required technique, his playing lacked the wisdom and maturity of the greats. However you have to give it to him for playing this sonata in the finals. One particular movement in the work – the third Allegro vivace – did possess a great amount of excitement; however, what judges are often looking for in competitions are not just the visual effects that the player has to display but a passion which I did find his performance to be slightly lacking. However I still feel that he is a pianist to watch out for.

This disc is available at or can be ordered from HMV (The Heeren) and Borders (Wheelock Place).

Johann D’Souza has looked back into his past and realised that the only competition he has won was a colouring competition in kindergarten, where he walked of with the first prize.