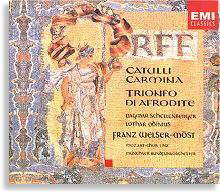 After the tremendous success of Carmina Burana, Orff completed two more “scenic cantatas”, Catulli Carmina (1943) and Trionfo di Afrodite (1950-1) to form a triptych to which he gave the collective title Trionfi.

Catulli Carmina, or “Songs of Catullus” was the result of a revision of music Orff had written in 1930 setting seven poems by Gaius Valerius Catullus (c. BCE 84-54). Verona-born Catullus lived much of his life in the Rome of Julius Caesar, and is remembered for the passion of his poetry, unusual because of its ancient origins.

The 13-minute Prelude beseeches the wanton youths to come and listen to the Songs of Catullus. In three acts, the work essentially comprises a play within a play – that is, we are actually watching an audience on stage watching a play, complete with applause and shouts of approval in between acts.

Below: The performers recording Catulli Carmina. 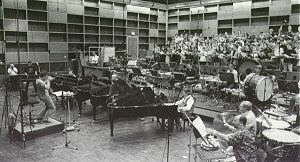 The Prelude is already a tour de force for the assembled percussionists and choir, demonstrating the full extent of Orff’s colourful style sans orchestra (which is still mighty impressive). In “O Fortuna” mode, the opening chorus of young men and girls build towards an exuberant climax (with cymbal crash, of course). Every instrument is exploited to the fullest: castanets, timpani, glockenspiel, cymbals, bass drum… they make string and wind instruments virtually redundant. The vivid or eerie scoring for four pianos and percussion delights and surprises with nervous ostinato, evocatively placed punctuation and rolling waves of piano chromatics imitating wind instruments. Listeners will instantly recognise Orff’s distinctive staccato (even ostinato) choral writing of “ah”s and “ha”s, as well as other rhythmic devices.

The choir of men and women burst with life as they sing and revel in… sexual flirtation. It is partly due to the explicit (even in Latin, whose words English borrowed…) texts that the work has seen relatively few performances. References to various interesting body parts, direct and indirect, appear everywhere throughout the Prelude. Ah but we live in the 90s, so this exhilarating work becomes even more appealing, even as they sing of the unstoppable passage of time and age, denoucing temporal delights. The mood of love’s anxiety, passion, frustration and anguish is caught without losing the sense of momentum in the story-telling at any time.

But for a real demonstration of this soprano’s soaring voice, listen to Act II. It is Scene VI, Catullus dreams of being in Lesbia’s embrace. After the soft choral opening, Lesbia/Schellenberger sings in the sweetest, most loving voice imaginable, caressing Catullus to sleep – “Dormi, dormi ancora…” (“Sleep, sleep still…”). Her ascent through the scale is flawless, the top legato note heavenly. This broad, almost mythical lullaby passes through the choir as well, to magical effect.

Though the story of love of a fickle woman is familiar, the ending is thoughtfully mixed:

Now has my mind been brought to such

a point, my Lesbia, by your guilt,
and so destroyed itself by its own devotion,
that it cannot wish you well, however
virtuous you may become,
or cease to love you, however low you sink.

In the concluding “Exodium”, Orff characteristically repeats the opening music, unifying everything with the element of cyclicality. The young men and girls sing insistently (again) of love in this brief chorus. But with the story having been told, we recognise the delicious irony as the old men interrupt the chorus to slap their faces in despair at the immaturity of youth. Love, fickle or bonding, will always happen. A brilliant masterstroke by Orff – the chorus reenters with even stronger confidence, as they exclaim love “Forever!”. 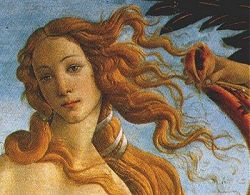 Those used to the orchestral textures of Carmina Burana can bear in mind two things: Orff turns his pianos, percussion and choir into an orchestra of sounds all its own. Though this may take a bit of getting used to, one cannot but marvel at the tonal and rhythmic resourcefulness of the composer. To complement this and complete your collection of Trionfi (assuming you already own a version of Carmina Burana), this disc helpfully couples Trionfo di Afrodite.

Right: Detail of Venus from “The Birth of Venus” (c.1485) by Sandro Botticelli

Now the Orff-orchestra returns in full force, augmented with three guitars, three pianos and of course percussion. Trionfo di Afrodite, or “The Triumph of Aphrodite” (ie. Venus, goddess of Love) is a wedding celebration in a fantasy Greek-Roman setting. But don’t expect Romantic sweet music! This is Orff! Remarkably, the musical range continues to astound: his usual chant rhythms, transparent orchestral/choral tutti, hushed paradise-visions – all never seem to surprise and bewilder.

Orff called Trionfo di Afrodite a “Concerto scenico”, which I think is cleverly accurate. This is not merely a concerto for choral or orchestral forces, but a concerto of scenic depiction; that is, a concerto whose “solo” instrument is dramatic theatre itself.

The source of the poetry is Classical – two odes by Catullus, poems by Sappho and a chorus from Euripides’ Hippolytus. The evocative greeting to the Evening Star (a clever reference to Venus) opens the wedding ceremonies. (More) Young men and women take turns to sing-chant, sometimes going deep into incantory style, as in Scene V when the bride and groom are led into the wedding chamber. The urge of the music towards theatre is irresistibile. The collective choral voice repeatedly summons Hymen, god of marriages, but end with an invocation to Aphrodite. 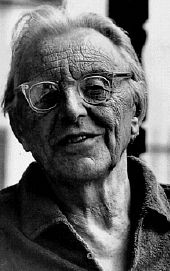 It is not surprising that these writings inspired Orff (left), so spiritually matched the poems and composer are. For example, after the wedding procession, bride and bridegroom sing to each other in Scene III Sposa e sposo, one of the most poetic and sensuously beautiful first-person depictions of consummation I have ever encountered – Love has scattered my wits, like a wind rushing down from the mountain upon oak trees.… A fine dew has fallen; the roses revive… Come, also, Queen of Love, and pour out in golden beakers nectar sweetly mingled with good cheer.…. Orff matches these words (I leave the interpretation to you) with intensely hushed, beautifully serene music, yet underlyingly nervous and excited.

Franz Welser-Mst leads his performers in vividly atmospheric readings. The dramatic sequence of Catulli‘s Prelude and the hushed mysterious beauty of Trinofo‘s Sposa e sposo demonstrate their capacity for long stretches of concentrated atmosphere. This is so crucial to this music, with its mixture of Gothic ominosity, Boschian vision and modern (even futurist) motoric momentums.

The monumental Invocation and Hymn to Hymenaeus are arguably the most exciting of the movements. The choir whisper, rattle, incant, chant and enchant their difficult Latin texts with unrelenting energy and skill. Though I doubt anyone can (or even should) do this perfectly, what is important is again the scintillating theatrical atmosphere they summon from the score. The very young-sounding voices of the Mozart Choir of Linz fits very nicely into the vibrant music, inbuing it with an exuberant tang of freshness. In scene V, La sposaviene accolta (“The bride is called forth”), listen for the duet “Flere desine” above the gamelan-like accompaniment. It is not indicated exactly who the two soloists are – they sound like a boy soprano and a countertenor – but their fresh tones are one of the many credits of this performance.

The Munich Radio Orchestra impress too with their solid support, perfectly balanced with the choir. Pedals, strings, precussion alike ring through the choir with almost aural cubist precision. Both fulfil their requirements for wide dynamic control in this dramatic score.

Trionfo di Afrodite matches Carmina Burana in terms of its skilled orchestration, the dramatisation of the words and the sheer scenic splendour it achieves, among other things. Orff’s treatment and attitude towards the words are apt, bringing to the ancient lyrics a dark modernity appropriate to both ages. After all, the Classical period was/is considered as the(a) height of civilisation – a temporal truth that even in the 20th century we continue to perpetuate for our times. The trilogy of Trionfi, with its recurring themes of birth, cycle and destruction, encapsulate man’s obsession with trying to pin down the inevitable, to define the ever-changing.

Significantly, the one prime force which runs through the texts is none other than the most beautifully mysterious of emotions: Love. Catullus is but one of many who have embraced and suffered its fortunes. Though Catulli Carmina is cynical, it admits to the unceasing desire for love; Trionfo di Afrodite, as the title suggests, ends in the triumph of Venus. Carmina Burana opens and ends with Fortuna, goddess of changing fortunes – linked to love via Catulli Carmina. 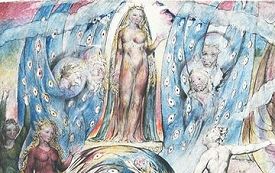 Exactly like the ending of Goethe’s Faust, the final vision in the trilogy is the “Appearance of Aphrodite” – Love deified, the Mater Gloriosa of Trionfi. We live in an era seeking answers in supernatural truths, paradisial visions. Many believe that the 21st century holds nothing but destruction and doom; many also believe that the 21st century will be the spiritual salve to and resolution of the 20th century’s horrors. Trionfi combines all of these: fortune, change, consummation, destruction, Spring, Winter, pleasure, misery, life, death… In the beginning, as we still are, the pawns of Fortuna; the ending is Love.

Above left: Detail from “Beatrice Addressing Dante from the Car” (1824-7) by William Blake (1757-1827). From Illustrations to Dante’s Divine Comedy

In Singapore, this CD is available at or can be ordered from Sing Discs, Borders (Wheelock Place), Tower (Pacific Plaza & Suntec City) or HMV (The Heeren).