Te Deum
and other Motets by the Portuguese Baroque 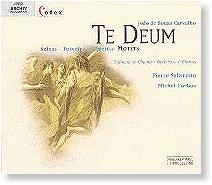 Just because one might not recognize these names from Baroque and Rococo Portugal doesn’t mean they are going to sound strange or boring. In fact, those looking for voices distinctively different from mainstream Europe might have to look elsewhere; those of you who love the likes of Mozart and Haydn and would like to sample different composers in roughly the same line need no go further than these pair of discs.

But just in case you think I mean that these composers are second-rate copycats – no. Carvalho’s Te Deum (“We Praise Thee, O God”), though weighing in at a massive 95 minutes, is surprisingly refreshing and original within the framework of fairly typical Classical techniques, including Haydn’s lyricism, Mozartian string skittering passages as well as those instantly recognizable woodwind choirs. The opening overture would have easily fit in a small symphony or serenade, the choral sections into an Italian opera so popular in those times. Nearly every aria is of consistently very high quality, and the trio for soprano, mezzo and bass on disc 1, track 6 is very charming indeed. The whole effect of the religious work is of an opera, rather like Rossini’s or Verdi’s similarly colourful sacred works. On track 9, listen to the delightfully vigorous opening, heralding the soprano’s choir-accompanied aria which completely belongs in a Mozart opera. On disc 2, never for a moment sounding monotonous, the Te Deum continues with a beautiful and jubilantly bright quintet for all the soloists, and its final choral movement is worthy any of Mozart’s masses.

Much of Carlos de Seixas’s music is lost, including 10 masses with orchestra and a Te Deum for four choirs. His 6-minute Ardebat Vincentius (“Vincent was on fire”) demonstrates considerable skill in his contrapuntal and vocal writing, consisting of a beautiful duet for soprano and mezzo framed by two choral sections. His Tantum ergo (“Therefore we adore on our knees”) is both solemn and intimate, moving in its subtle shifts of mood.

Antonio Teixera, Seixas’s contemporary, writes in a fashion strongly reminiscent of Bach and Handel. The second movement of his Gaudete, astra (“Rejoice, stars, rejoice!”) is introduced by two violins accompanied by cello and harpsichord similar to the chamber arias of Bach. The delightful final aria is Handelian in the happiest fashion, with soprano Jennifer Smith secure and jubilant, matching the violins’s purity of tone. The collection ends with two well-sustained motets by Francisco Antonio de Almeida.

The analogue recordings have been remastered to as near perfection as possible, with firm body of sound and effectively non-existent hiss. All the performers are technically secure and consistently refreshing. Too much focus is placed in composers from the mainstream European countries at the expense of countries like Portugal, Spain, South America, Asia and even Australia; likewise Shakespeare is only the greatest of the English. So don’t be biased: explore, explore!

This disc can be found or ordered from Sing Discs (Raffles City), Tower (Pacific Plaza), Borders (Wheelock Place) or HMV (The Heeren). Say the magic words “The Flying Inkpot” to Doris at Sing Discs and get $2 off this set!

Chia Han-Leon has never been to Portugal.

Back to the Classical Index!… or read previous Baroque music reviews at the Inkpot