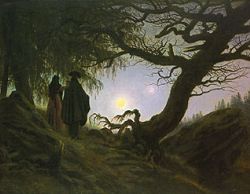 A nocturne by definition is a short composition suggestive of night time calm. In the 18th century, nocturnes were short pieces in the style of serenades, as in Serenata Notturna. In the 19th Century, the lyrical aspects of Italian vocal writing were transferred to the keyboard. Chopin expanded on the scope of the nocturne, expressing a wider range of moods.

* “Singing with the fingers”, exhorted Chopin. It is not known if he was referring to his nocturnes, but it would seem logical he was. Thus, it should follow that his nocturnes have a lyrical, almost singeable quality given the historical background of such works. However, not everyone agrees. 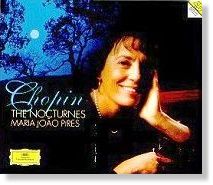 If one could put the two pianists in the same room and have them play at the same time, the differences in playing style would be apparent immediately.

Pires has a warm tone that is very expressive. Sheer technical brilliance does not seem to be her goal although she is by no means lacking in this aspect. There is such a great wealth of feeling in her playing that one cannot help but be swept along.

Ashkenazy, on the other hand, is more subdued, even dignified. His tone is sparkling and crystal clear. What he lacks in emotional depth, he more than makes up for in virtuosity, especially evident in the more complex passages which he plays at break-neck speed. One just has to stop and listen, open-mouthed at such technical mastery.

Nocturne No.2 in E flat major, op.9 no.2. The ever popular E-flat nocturne is probably the best one to use as a basis of comparison of the two recordings. Here it shows Pires at her lyrical best. The tempo/expression marking might as well have read Andante Cantabile instead of just Andante. One is almost compelled to sing along. The famous melody takes on a delicate, tender, even wistful quality whilst the accompaniment remains suitably subtle.

Pires is very free with using rubato – a trend noticed in all the nocturnes. Whilst a touch of it adds to the quiet beauty of the melody, she tends to overdo it at times. The most striking example is near the end of the piece – with the loud octaves and the big chords – where she almost doubles the tempo.

She also has a tendency to be heavy-handed. The above mentioned passage is marked con forza, but one is not sure it was meant to be taken quite so literally. It was almost as if she were banging away with all her might. It seems a bit excessive.

Ashkenazy’s rendition sounds more like a waltz than a wistful song. He plays it quite a bit faster than Pires does. The first time the melody is heard, one is struck by how he plays it, hardly lingering over the notes. In the subsequent sections, however, some rubato is introduced which reduces the somewhat cold feel of the opening. The con forza passage is not played as passionately. It comes across as dignified and contemplative – a more fitting ending, perhaps. 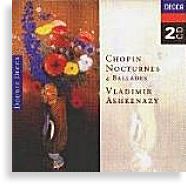 Nocturne No. 8 in D flat major, op.27 no.2. For once, Ashkenazy’s understatedness works in his favour. His light touch and sparkling tone convey a sense of tranquillity. The leisurely pace makes the melody more lyrical and lilting. It does not seek to overwhelm.

Pires’ expressiveness seems to have gotten the better of her in this piece. The beauty of the melody is drowned by her heavy-handedness. She lingers just a tad bit too long over the individual notes in the melody which cripples the pace. However, in the last section (with the big booming chords Chopin is so fond of) Pires’ emotional playing brings the music to a proper climax which is markedly absent in the Ashkenazy recording. His light touch which worked for the early half of the piece sounds almost nonchalant here. One wants to be overwhelmed at this point. The sense of anti-climax is a little hard to get over. Both renditions end quite nicely – pensive, calm and filled with tenderness.

Nocturne No.13 in C minor, op.48 no.1. This is one of Ashkenazy’s most expressive pieces. The quiet opening and first theme is played with a great sense of calm and sadness. Even in the middle with the chromatic octaves, which Pires attacks with a passion, Ashkenazy remains dignified. The last section, where the opening theme is recapitulated over an accompaniment of repeated chords, Ashkenazy seems to hurry somewhat, but rounds it off nicely, ending on a melancholy note.

The lyrical quality in Pires’ playing is again demonstrated in the quiet first section. Her tendency to employ rubato at will is also evident. This serves to heighten the underlying tension, the feeling of emotions held in check, only to be released in the fiery middle section. The last section with its endless string of chords reminds one of an angrily tossing ocean, on which one is adrift. Huge waves crash about but then the storm breaks and one drifts quietly off into the night. 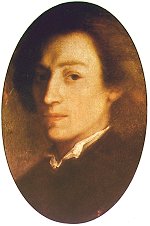 The million dollar question, as always, is “Which recording do I buy?” It all boils down to the listener’s preference. If one likes the nocturnes to be sparkling and tastefully understated without too much raw emotion, the Ashkenazy would be a better buy. I like the recording for those reasons, and also because being a pianist myself, I am quite awed by the technical brilliance of this virtuoso.

However, if one likes the music to be filled with passion and fire, the Pires would be the obvious choice. While I do not claim to be an expert on Chopin (left), I believe the Pires rendition is more true to the spirit of Chopin. As mentioned in the opening paragraph, Chopin sought to widen the range of moods in his set of 21 Nocturnes and I think Pires has done an admirable job.

All in all, both recordings are superb. Both have their merits and I can safely say that one will not go wrong with either recording. It is a bit like choosing between black and white chocolate. They are both nice, but the purchase criteria is dependent on personal taste and preference. Personally, I prefer the Pires becuase I like music that overwhelms, makes you want to cry or gives you goosebumps. I think Chopin wanted it that way.

Priscilla Kang once found herself grappling with her Honours Thesis (Horrible Torture). She relieves stress by playing with her teddybears.