THE PASSAGE and changes of time yield transformations. According to old Alamo plans and maps, James Bowie’s quarters in the Low Barracks, now long gone, were located near what is now part of the vest-pocket park facing the Alamo in San Antonio, Texas. There’s now no trace of Thoreau’s cabin at Walden Pond near Concord, Massachusetts. The house at 25 Brook Street in London, where Handel lived for 36 years, wrote The Messiah in three weeks, and died in 1759 is only now being restored to its original appearance and will be the first composer museum in London. The Vienna building where Brahms lived for the last 26 years of his life was demolished (but at least ceremoniously) on April 3, 1907, exactly ten years after he died there. The areas surrounding Beethoven’s residences in and around Vienna would be totally unrecognizable to him today.

Left: Beethoven’s desk, with his spectacles and his inkpot(!).

Remainders and reminders of the great can affect and inspire the devoted. Behind otherwise ordinary objects are the revealing Beethoven stories with their anecdotal richness. Even daily accouterments, objects of no intrinsic value, are often considered sacred relics. An official document with only his signature brings a fortune at auction, and his major manuscripts are effectively priceless. The quills he wrote with, and a lock of his hair taken from his deathbed, are kept in a glass case in the Beethoven Memorial Rooms at Mlkerbastei 8 in Vienna. Also displayed is the original green door to the Schwarzspanierhaus flat where the composer died on March 26, 1827. Exhibited also is the door’s original key-hole cover-plate: in the 1880s it was “taken as a souvenir” from the door of Beethoven’s flat by a young musician named Gustav Mahler, who later returned it to the appropriate organization when he was Director of the Vienna Opera. It’s because of their Beethoven association that these tangible but unanimate objects are so revered.

Beethoven’s impact corresponds to the then-new and unprecedented early 19th- century views characterized by the Romantic era’s perceptions of musical genius and historic greatness. It could apply to almost every composer who attained fame in life or after, but it seems to apply most to Beethoven: it was he who single-handedly changed the course of musical history in his era with the composition of the “Eroica”, a symphony as revolutionary in its day as was Wagner’s opera Tristan and Isolde six decades later. 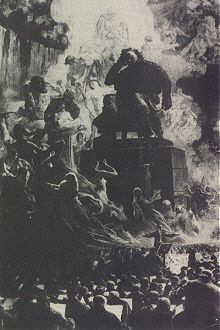 THE CONCEPT of the supreme authority of a composer, and the conviction that his word was considered definitive, were some of the notions of history that evolved during that age. The image of the creative mind was then respected and in some cases even enhaloed, with The Composer and the aura that surrounded him an object of reverence, and his persona being seen by many as something bordering on divinity. This was the Romantic view – “romanticized” now but quite real then. The responsibility for the fostering and impetus of the 19th-century Romantic sentiment falls to Beethoven.The intervening decades have only deepened his seemingly impenetrable mystique and character. He had a reputation, largely warranted, of being something of a malcontent. If his chronic complaining wasn’t always justified it was certainly understandable, considering his physical and emotional difficulties. He was misanthropic, impatient, ruthless and rude with servants, suspicious and distrustful of friends, sometimes vulgar, and could be unethical in business dealings (having offered a piece to five different publishers and selling it to a sixth). Money matters often concerned him, though his grumbling in this regard wasn’t totally merited. Beethoven wasn’t an 18th- century Vanderbilt but he was far from a pauper – as indeed were most of the great (and even the not-so-great) composers. The image of The Starving Composer is largely a myth – often believed and traditionally accepted, but usually false, and although Beethoven first made his mark as a pianist (and especially as an improvisor), he ultimately found renown as a composer.

There can be balance without symmetry: he also had a noble character, a magnetic personality, was loyal to his art, and, tellingly, he had that elusive quality of charisma. He was all of these things, and more. The colorful nature of a divergent thinker precludes black & white judgements or descriptions. What matters most is his contribution, and that he enriched posterity with creations that outlived him and which will outlive us. When the violinist Radicati asked him about the “meaning” of the late quartets, Beethoven replied, “Oh, those are not for you, but for a later age.” 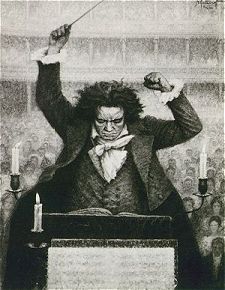 ONE OF HIS most extraordinary characteristics sets him apart from composers who preceded him (and from most who followed): his own perpetuation of his musical growth. Where most composers reach a plain of musical maturity, Beethoven continued his ascent throughout his life. He not only climbed a musical Matterhorn but he seems actually to have created and scaled entirely new peaks of his own.Left: Portrait of Beethoven by Michel Katzaroff, early 1930s.

Some of his late pieces, particularly his chamber works, were extremely demanding for listener and performer, and were called “…the musical mutterings of a deaf man.” The Ninth Symphony was premiered after only two rehearsals and was played from manuscript, which makes us wonder how musically cohesive a performance it actually was. Beethoven’s late piano and chamber works, respectively, may have defied both the performance-capabilities and the comprehension of all but the most astute musical minds of his day. Some of this music was beyond the scope of his contemporaries.

It took time for these works to gain general acceptance, and it wasn’t until half a century after Beethoven’s death that his late quartets became “accessible.” Beethoven’s last works may have sounded strange and perhaps even tumultous to some listeners. An example is his Grosse Fuge (Great Fugue) for string quartet, a piece described by Igor Stravinsky as, “an absolutely contemporary work which will be contemporary forever.” In Beethoven’s day, some of his later works were as difficult to perform (and, for some, even to listen to) as his wild handwriting is difficult to read.

Our ears are accustomed to 20th-century sounds we hear today, so Beethoven’s music no longer seems new or “revolutionary” to most of us, and may now sound actually old-fashioned. This was not the case when his works first appeared, and some of his later music arguably belonged to the musical dawn of the world’s next century. It’s conceivable that had he lived longer and continued his musical growth, his last works, viewed in proper historical perspective, might have assumed characteristics approaching the avant-garde.

Nevertheless, on the musically informed listener Beethoven’s late works now make an eloquent impression. If his music no longer answers our esthetic wants, it surely serves our esthetic needs.

WHEN WE DEAL with someone of historic tradition and folklore, it can be difficult going beyond simple documentation – even, or perhaps especially, when it’s abundant. History isn’t made or written solely on the basis of documents and official decisions. Anyone can report facts, but trying to pierce the armor and enter the sanctum of personality and character is another matter, particularly in Beethoven’s case, where the plethora of data about him, much of it contradictory, renders the difficulties nearly horrendous.Some, like Melville and van Gogh, became legendary posthumously. Others, like Beethoven, even before the era of mass media coverage, became musical and even cultural icons during their own lifetimes. He lived so long ago that the distance of time renders the contradictions and confusion about him almost impenetrable, and his reputation, even in his own day, precipitated the creation of a historical petri dish in which the Beethoven culture grew and flourished. He effectively became a kind of legend so early that the records are now congealed with invention, fiction and fantasy, creating nearly insurmountable obstacles to the human features behind the mystique, if not clogging access to the man altogether.

In his book, Beethoven-Sttten in sterreich (Beethoven Towns in Austria), the historian and journalist Rudolf Klein says there is no documentary proof that Beethoven lived at Probusgasse 6 in Heiligenstadt, now revered as the House of the Heiligenstadt Testament. Klein says there exists only evidence and probability that the composer inhabited this particular dwelling, and that with continuing Beethoven research, accessible data forming specific Beethoven connections could be attributed to these existing houses only afterward. Klein acknowledges that perhaps even suitable legends might later have been realized around these dwellings, and that in the absence of incontrovertible documentation, he views the house on Probusgasse mainly as a symbolic memorial place.

We admire those we can’t emulate but would like to. We also tend to invest martyrs with heroism and heroes with martyrdom: those who left life prematurely, at whatever age, prompt the most intriguing conjectures. Beethoven’s life, by turns humdrum and dramatic, and his untimely death exemplify this: posterity was robbed of treasures we can now only try to imagine – including the Tenth Symphony (sketches for which he actually made), and perhaps a Daguerreotype, if only he had lived even another fifteen years. 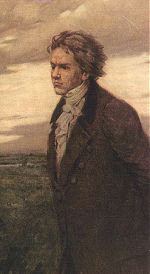 CONJECTURE IS fruitless but still fascinating. As the music with which he’s linked now virtually symbolizes him, his name and the very concept of The Composer have become fused. His 57-year existence contributed as much to 19th- century legend as to the depiction or representation of historical fact. In his era, locale and circumstances, Beethoven was a man whose eloquence manifested itself in his work. If his letters and personal conduct don’t reveal the astounding degree of awareness, observation and clarity of mind as do those of others like Mendelssohn, Schumann, Berlioz, Saint-Saëns, Debussy, Brahms and Mahler, his music supplies the balance, and compensates what he may have lacked as a mortal in day to day life.

With lack of proof in some respects and conflicting accounts in others, it’s a given we’ll never have definitive resolutions to many unanswered Beethoven questions. In dispute even now is the identity of The Immortal Beloved, though Maynard Solomon makes an excellent case for her in his book, Beethoven (Schirmer, New York, 1977). Inquiries of ten different historians, researchers and scholars can net twelve different findings. We can be sure only that there is so much of which we’ll never be sure.

The obvious, by its nature, often escapes our attention, so it may be worth noting that Beethoven accomplished more in a year than most of us do in our individual lifetimes, and that he was as alive then as we are today.