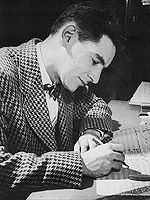 New York, Jan 6. 1949 Jerry R. called today with a noble idea: a modern version of Romeo and Juliet…And it all fits, the Montagues and Capulets will be rival street gangs, the Jets and the Sharks. Friar Lawrence is a neighborhood druggist, street brawls, and a double death …

Sounds familiar? No, it does not star Leonardo Di Carprio. In fact, when West Side Story was premiered in 1957, Leonardo’s parents wouldn’t even have met. The collaboration of young American musical prodigy Leonard Bernstein, the talented choreographer Jerome Robbins, the gifted lyricist Stephen Sondheim and writer Arthur Laurents – West Side Story could hardly ever have a chance to be anything less than a smash hit.

The team set out with a vision, to change the face of American musical theatre. Music historians looking for a true blue American opera have already missed Gershwin’s Porgy and Bess and Bernstein’s earlier collaboration with Lillian Hellman in Voltaire’s Candide. I will not consider West Side Story an opera, but it comes close to it with the “seriousness” of musical composition and demanding vocal parts for the leads, which are written as if for operatic singers (the extended high B-flat for tenor in “Maria” for example).

Thus, this 1984 recording of the musical makes good sense. Known amongst Bernstein fans as the “operatic version” of West Side Story, it features a stellar cast consisting of Dame Kiri Te Kanawa (Maria), Jose Carreras (Tony), Tatiana Troyanos (Anita), Kurt Ollman (Riff) and Marilyn Horne who sings “Somewhere” through an unnamed character in the show. This also features Leonard Bernstein conducting his own music for the very first time.

Not that the Broadway cast recording or the movie soundtrack to the Oscar-winning film version are no good, but listening to this rendition is a revelation. Dame Kiri Te Kanawa breathes new life into her character as she vocalises every phrase of Bernstein’s music with such musical sympathy. This was music she grew up on, she says in an interview from West Side Story: The making of the recording (also available on video casette and VCD) even before she took singing seriously.

On the other hand, we have Spanish Jose Carreras whose discomfort with the language and culture of the music are clearly audible but whose musicianship and voice is no less than magnificent. “Maria” is a song that has been sung in so many ways by a many singers, but to hear Carreras sing it is heart wrenching. The cadenza-like, lovelorn rhapsodising on the name “Maria” finally receives justice in this rendition, as Carreras’ passionate delivery is easy and confident.

Surely, the most moving song in here is “One hand, one heart”, a duet sung by Te Kanawa and Carreras. If you already know the sad ending of the story, this scene where Tony and Maria have a make-believe wedding at a bridal shop will be enough to move you to tears. Leonard Bernstein’s music communicates directly with the heart; his uncanny understanding of the effect of music in the theatre prevails through the bittersweet melody and beautiful orchestration of the accompaniment. Adding to all that here is the mastery of the phrase and the inspired singing of the two leads that leaves the listener spellbound till the end of the song.

Tatiana Troyanos’ Anita is Maria’s nurse, a fiery lady of Puerto Rican descent. She leads her girls in raucous account of the humorous and contagiously rhythmic “America”, possibly the most triumphant take on this recording. The lively ‘fiesta’ atmosphere is captured wonderfully by the orchestra and chorus, a spontaneity that makes you want to jump out of your seat and dance! Her duet with Te Kanawa on the acerbic “A boy like that” deserves mention as well. They capture Anita’s love for Maria leading to her change of loyalty, which is a great dramatic consequence to the rest of the musical, from angry outbursts to her sympathy towards the love of the young couple even while it forebodes the tragic outcome. Kurt Ollman’s contribution as Tony’s pal Riff is less significant, though his portrayal of the rash belligerent gangster that is contrasted with the more “Romantic” Tony is very effective.

July 8, 1957 … I guess we were right not to cast “singers”: anything that sounded more professional would inevitably sound more experienced, and then the “kid’ quality would be gone. A perfect example of a disadvantage turned into a virtue.

I’m sure Bernstein himself would have begged to differ at the outcome of this recording. Certainly, the ‘kid’ quality is gone, replaced by lovers who can so beautifully articulate every nuance of the music. Perhaps the staging of this is theatrically unfeasible but the music is just so good that it justifies the release of this version.

Whether intentionally or otherwise, the supporting orchestra and chorus who perform so wonderfully is not even named. Gramophone quotes from unknown sources that the orchestra was formed by “some members of the New York Phil” and others. The versatility of the playing is amazing as they tackle vaudeville numbers, hot Latin-American numbers, snappy jazzy tunes and symphonic writing with equal ease and proficiency. The male chorus members, cast as the Jets, deliver a very funny “Gee, Officer Krupke” and the female choir accompanies Troyanos’ “America”. All in all, a highly professional team except for Nina and Alexander Bernstein (daughter and son of LB), who do the narrative (spoken) parts of Maria and Tony with fake Puerto Rican accents and contrived delivery of lines. I think this is one of the most distinct flaws in this otherwise definitive rendition of the music.

Washington D.C. Aug 20, 1957 … I laughed and cried like I never seen or heard it before. And I guess what made it come out right is that we all really collaborated; we were all writing the same show… Now a whisper about a happy ending was heard. A rare thing on Broadway.

Lenny voices what must have been the opinion of the creative geniuses who worked on West Side Story. The composer’s work can be acclaimed on all fronts: Jerome Robbin’s brilliant choreography and direction is well-known in the many critical successes in classical dance and on Broadway throughout his lifetime. In retrospect, the then young talent Stephen Sondheim had already received legendary status in the American musical and song-writing scene with landmark works like Sweeney Todd and Into the Woods. Even so, I’m inclined to say that it is Lenny’s music that is truly the backbone of West Side Story; this music when presented with true understanding under his own baton communicates with everyone, from the elitist “Classical music lover” to the layman alike. Indeed, this is the mark of a great work; reminiscent of the reception Bizet’s Carmen received at its premiere. For all we know, the masterpieces of the American musical theatre will be hailed as great art by future generations as opera is today.

…I am proud and honored to be part of it

It is known that Bernstein never wanted to be remembered as a composer for his work in West Side Story, as much as he loved it. He wanted to be remembered for “serious” works like his symphonies, the “Kaddish” and “The Age of Anxiety”. His theatrical ventures have always received more praise than his “serious” compositions, much to his disappointment. It is surprising indeed that a man who was known to spread the joy of music to so many that he worked with and taught, through concerts, masterclasses or television broadcasts, felt so strongly about the need to have written good “serious” music. West Side Story is as successful a piece of music as any serious composition that I have ever heard. Especially in this CD, it deserves to be appraised in a new light. It makes you laugh and cry with it, touching subtly on social themes and of the noblest notions of Romantic love. History will remember Leonard Bernstein as the most important American musical force in the 20th Century, one of the greatest conductors that has ever lived, one of music’s greatest teachers … and the man who gave the world West Side Story.

Tonight, Tonight … Adrian Tan is no better than all right.