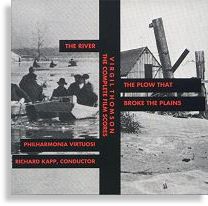 The power of film music lies in its ability to embellish, focus and heighten the emotions and climaxes of the movie. In doing so, a good soundtrack acquires the ability to evoke images from the film, even with the listener’s eyes closed.

In recent years, partly thanks to heavier emphasis on soundtracks by the Academy Awards, Hollywood film composers have come into their own, with the likes of John Williams, James Horner and many others. An older generation may remember the majesty and grandeur of Gone with the Wind, Dr. Zhivago, Lawrence of Arabia and other memorable epics, the soundtracks of which have now become so-called “evergreen”. In this collection, we explore the film scores of two early American documentaries.

America suffered one of her greatest economic disasters with the Great Depression in the 1930’s. At the same time, an ecological and agricultural disaster set in, whereby great stretches of land in the Plains States were rendered infertile, turning what was once farmland into the Dust Bowl. It was a time of great hardship indeed. 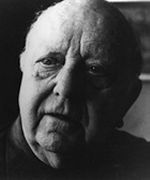 In 1935 Pare Lorentz wrote and directed the documentary The Plow That Broke the Plains for the Farm Services Administration. Documenting the Dust Bowl and government efforts to remedy the situation, it was to serve as propaganda for Franklin Roosevelt’s New Deal government. Narrative text was written by Lorentz himself, and the music was composed by Virgil Thomson (left), an American composer who was better known as a music critic for The Herald-Tribune.

Virgil Thomson was very much a serious classical composer (as are many other film composers, a fact many John Williams fans are happily ignorant of). Delicate, sparse scoring and the occasional odd harmony gives his essentially tonal music a contemporary feel, and the clarity of individual instrumental lines and occasionally polyphonic writing creates the atmosphere of a chamber orchestra (as compared to, say, a monophonic and more densely-orchestrated score by Alex North).

Though I have never watched The Plow That Broke the Plains, it is not too difficult to guess what is being show onscreen by listening to Thomson’s evocative music. From the stark opening Prelude & Fugue, which introduces a lonely and barren Dust Bowl, a Pastorale laments what grass is left on the plains. Cattle and a Homesteader are variously depicted by carefree American folk dances in triple metre, with only a shadowy interlude to tell of the hardship. 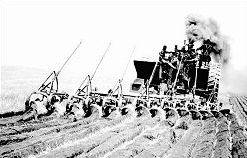 A trumpet flourish introduces a Tractor which marches in to take the land, after which the uncertainty of rejuvenating the land is belted out by a snazzy yet soulful Blues tune. This carries on till the Drought is evident with a soft interlude. The Wind and Dust then picks up speed and erupts into a more dark and ominous storm, and finally, after a short chorale, Devastation takes over with a reprise of the Prelude theme, bringing us back to the strangely forlorn and harsh starkness of the Dust Bowl. The piece culminates with a slow but rageful tango, sending the outcries of the people to the heavens. Are they listening?

The Script of The Plow
The success of The Plow prompted the emergence of a second documentary, The River, which “addressed the Mississippi and the government’s efforts to redress the damage done to it by man and vice versa”, according to Richard Kapp’s liner notes. Again, Virgil Thomson wrote the score and this time the scoring is richer, but the elements of 20th-century classical music are now more evident. 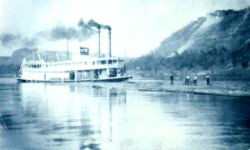 Initially, I was astounded by the similarity of the music of The Old South to Oriental (specifically Chinese) music. Yet as the Prologue continued, images of the Old South came to mind: a simple life among the barest of necessities, but with a stoic and hardworking character, a flavour reflected in Thomson’s music. Progressive marches introduces Industrial Expansion in the Mississippi Valley, with interspersed stony and metallic sound effects that bring to mind massive piling works and the rise of factories, all in fast motion (the effectiveness of this sound effect is evident once you hear it).

Soil Erosion and Floods are depicted by jarring chords and through the sadness, the Industrial Expansion theme returns briefly in a valiant attempt to battle the adversities of nature. A recapitulation of The Old South sets the tone for the Finale, where the devastation to the Mississippi River is shown, but a final bugle call injects optimism into the government’s project.

The Philharmonia Virtuosi, as noted by Richard Kapp, has “performed these scores at ‘live’ concert performances in synchronisation with the films”; the restoration of performance materials has also made necessary very extensive and painstaking work. And truly, the scores are played with such understanding as only performers could after intimate involvement with the music; the rather narrow acoustics afforded by the recording hardly mars the excellence of the orchestra.

In Singapore, this CD is available at or can be ordered from Tower (Pacific Plaza & Suntec City), Sing Discs (Raffles City), Borders (Wheelock Place) or HMV (The Heeren).
367: 11.12.1998 Soo Kian Hing