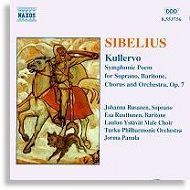 Includes libretto in Finnish and English.

This performance still does not match the Berglund recording on EMI Matrix (a brief review is provided in the ink-troduction to Kullervo), but it does have its merits. The orchestral playing of the Turku Philharmonic is probably this recording’s greatest asset. It is finely detailed, but not to the point of fussiness. Listen to the delicate phrasing of the woodwind in the Introduction, be they chirping, pulsating or singing; or in the wistful second movement, Kullervo’s Youth, the swirling winds of the strings. Panula’s orchestra plays with much feeling for the emotion as well as aural imagery (well, Finland is the land of something like 188,000 lakes). The more I listen to the work, the more I discover that which is just throbbing, like an unnoticed heartbeat, underneath the primary melodies on top.

Berglund draws greater dramatic power from the music in general, for example in the distinctive heroic brass theme which opens the Introduction. Panula presents things with a kind of “comfortable” feel, less rugged, but certainly not soft either. I suspect some will feel this is underplaying the rough-hewn strength of the music, but I do enjoy its sense of flowing momentum. If he (Panula) is thus closer to the “smooth” approach Davis takes, he at least does not become either too deliberate-sounding or “easy”. Davis overdramatizes quite often; Panula neither does that nor underplays. In fact, occasionally his sense of flowing drama is quite impressive, I think provided by his careful sense of the score’s layers. The interchanges between choir and orchestra in Kullervo and his Sister – very well sustained at 24 minutes – are quite well-done because of these attributes.

A very important reason why you should probably not bother too much with recordings made by a non-Finnish vocal/choral cast is simply because of the language difference. This point is not an act of cultural puritanism on my part – it is very real. If you compare the Finnish Laulun Ystvt Male Choir here and the British choir in the Colin Davis recording on RCA, the differences in the way they treat the Finnish libretto are not only painfully obvious, but the preference for the Finnish side becomes mandatory. To cite two examples: the curling of the r’s in “Kullervo, kalervon poika” – the first line of the choral text – and the (correct) pronounciation of the in the very next line, “sinisukka ijn lapsi”. This is only the beginning!

What ever the case, I found myself easily drawn into the chugging/chanting way the Laulun Ystvt Male Choir open Kullero and his Sister. This fits the nature of the multi-short-syllabic language and the Kalevala poetry. The London Symphony provide very solid support, ruined by their Choir’s legato-ish treatment of the choral text. I can’t stress this enough: the Finnish libretto sounds perfectly natural, as it should, only in the voices of the Finnish choir.

The weakest spot(s) in this Naxos offering is in the two soloists, who are unfortunately rather on the characterless side. On this account, Davis’ and Berglund’s soloists win hands down. Panula’s baritone Esa Ruuttunen is not so bad – his final song of horror is heartfelt without going overboard. However, the soprano Johanna Rusanen is guilty of some rushed and mechanical singing in the passage where she demands to be set free (about 9 minutes into track 3). Her singing is essentially secure. Still, when she asks Kullervo about his heritage, she sounds bored and uninterested, whereas other sopranos I’ve heard do this tenderly, even blissfully! (After all, the two have just done it).

But Rusanen gives good contributions elsewhere. The orchestral song which constitutes the passage where she describes herself picking berries in the forests (her last verses before Kullervo ends the movement) is very beautiful and faintly nervous – important atmosphere because it has already been revealed that she is Kullervo’s sister. The orchestral accompaniment of the Turku Philharmonic is sensitive and dramatically nuanced. This passage proves very much that Sibelius could have been a great opera composer if he wanted to be. Listen too for the final blow of timpani at the end of this movement.

I’m particularly impressed with the brass-playing in Kullervo Goes to War – again fine performances without overblowing or being over-dramatic. At this point, it’s worth noting the nicely balanced and detailed recording of this Finnish production – listen to the way the brass never overwhelms the strings, or the intricate interaction between woodwind and strings. Panula conducts this movement with great skill, maintaining the listener’s (or at least this one) attention throughout.

The final movement, depicting Kullervo’s Death is done in a somewhat low-key manner. This does contrast with the grand tragi-heroic climax quite well, but nevertheless, Berglund and Davis have better readings.

In all, here’s a competent performance of Kullervo from an all-Finnish cast for those with a tight budget. Not only are the notes on the music and composer full and detailed, Naxos Finland has intelligently included a write-up on Sibelius’ contemporary Akseli Gallen-Kallela, Finland’s painter-counterpart to the composer. The additional information is vital, as can be seen by the host of Kalevala-related paintings Gallen-Kallela produced (on the cover, for example). All this add up to 15 pages worth of notes, bios of the performers and libretto. Despite the weaknesses mentioned above, this remains a great investment if you still have no Kullervo in your collection.