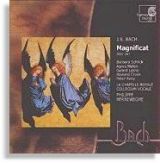 This is among the most consistently enjoyable of the many recordings of the Magnificat available in the market. As with all his previous (and ongoing) recordings of Bach, Philippe Herreweghe continually demonstrates his beautiful sense of the Bach line. In his hands, the music flows but never slushes, articulates but never becomes jagged. The opening chorus is wholesome and earnest, not as punchy as other versions, but always graceful. 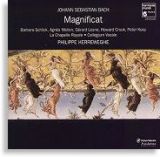 The lineup of soloists here is a wonderful cast of experienced Baroque music singers. Barbara Schlick makes a intensely beautiful soloist in the arias for soprano 1. Kooy, who is now recording for both Herreweghe and BIS’s Bach Collegium Japan Cantatas cycle, makes a commanding bass. The alto role is taken by the expert French countertenor Grard Lesne, who provides moving singing with perfectly acceptable tone.

The chorus provides smashing singing, not just in “Magnificat” but especially in the fast-paced “Fecit potentiam”. The orchestra includes some of the very best in business: Roy Goodman is leader, Marc Hanta’s lilting flute can be heard in “Esurientes”, Marcel Ponseele leads the oboes while Stephen Keavy is with the trumpets.

All in all, you could quite possibly find other versions with specific movements done better. But for a version with no complaints in any department, this is the one to have. Note that the original release at full-price comes with libretto, while the 1997 reissue at budget-price (HMX 2901326; with catalogue) has none (which is why it’s there in the inktroduction). In both cases, the original coupling of the famous “Reformation Cantata” BWV 80 is retained, doubling the festive spirit of the album. 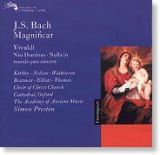 The version presented here is the original E-flat version, BWV 243a. In addition to the difference in key, there are four interpolations in the work, which the notes claim may have been acted out for Christmas. They were removed when the Magnificat was used for non-Christmas occasions. According to the notes, only 98 bars out of the total 578 escape alteration when Bach completed the transformation to D major. I must admit the differences are not readily apparent to my ear.

Nevertheless, the opening “Magnificat” chorus is strikingly refreshing, and I do get the sensation that the E-flat key is brighter. Despite adopting a slower tempo than most period versions, director Preston moulds a thoroughly convincing account. The boom of the timpani with the swaggering trumpet runs combine with the bright voices of the all-male choir to create tremendous, jubilant presence. A grand and stately account, full of Bachian dignity, which is repeated in the finale.

The all-male choir, with boy trebles, makes for a different soundworld. They sing bravely, but are not faultless. At best, their bright voices add a heady atmosphere to the E-flat mood; but at worst, the kids do holler some very ugly sounds, notably in the laboured account of “Fecit potentiam”, where their inadequacies justify the saying “you are only as fast/good as the slowest/worst in the group.”

Emma Kirby leads the list of fine British soloists. Recorded in the late 70s, their lean style of singing is a little dated. Nevertheless, they still remain convincing. Among the interpolations, “Virga Jesse floruit” is particularly delightful, depicting Mary (soprano/Kirkby) and Joseph (bass) celebrating the birth of Jesus.

This mid-price reissue is coupled with: a solemn motet Der Gerechte kommt um which would have done Bach proud; and two more by Vivaldi, Nulla in mundo pax sincera for soprano and orchestra, and Nisi Dominus for countertenor and orchestra. The latter are among the Italian master’s most wonderful vocal works, both given distinguished accounts by Kirkby and James Bowman.

This Magnificat is also available in a “Borg” reissue. Since the absorption of the Early Music label L’Oiseau Lyre by Decca, many of the “Lyrebird” albums have been re-released with new and completely uninspiring covers, with no change otherwise. Look out for the big yellow flower, coupled with Vivaldi’s Gloria, bearing the catalogue number 414 678-2. 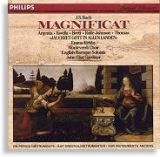 Get ready for a ride! This recording holds the World Record for the Fastest Performance of Bach’s “Magnificat” chorus! Clocking in at 2’49”, the speed at which Gardiner takes it defies belief, and yet if anyone is to do it, it is the Monteverdi Choir. Their running passages just stop short of turning into full laughter, and it is their razor-sharp precision articulation that saves the performance from turning into a joke.

Still, I’m pretty sure many will balk at the phenomenal tempo and too-precise singing, so do sample before you commit. At least admire the fact that Crispian Steele-Perkins is negotiating those rapid runs with a valveless Baroque trumpet! If like me, this happens to be the first version you heard, the effect could truly be total magnificence. Brilliant too and in the same vein is the performance of “Fecit potentiam”.

Other credits in this performance include the presence of many of the 1980s’ core group of British Baroque music experts such as soprano Nancy Argenta and tenor Anthony Rolfe-Johnson. All of the singing is in the recognisably British style of the 80s – clean and lean (but not thin), and highly accessible to those who dislike the heavy, mainstream opera style of singing. (But of course, times have changed, and this may seem old fashioned now).

The alto-tenor duet “Et misericordia” and trio “Suscepit Israel” should be highlighted for the hushed, almost fearful tones of the singers, matched beautifully by the misty strings. Emma Kirkby joins in as soloist in the coupling of Bach’s Cantata BWV 51 Jauchzet Gott in allen Landen, with its distinctive trumpet duet with the soprano, more than ably performed with Steele-Perkins.

Interpretation controversies aside, the main drawback of this disc is its extremely short length of 41’46 (at full-price!) – more than enough space to fit another cantata, even two. Also, it’s pretty old and is really due for reissue. I guess the fact that it stubbornly remains at full-price is testament to its good qualities. I like the Leonardo cover too.

BACH The Magnificat – An Inktroduction – INKPOT

BACH Magnificat in E-flat and other movements. Various/Rilling (Hanssler) – INKPOT