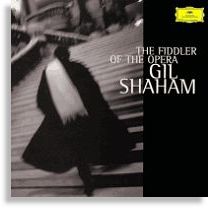 Recordings of an entire album of encore pieces are nothing new for most violinists and pianists alike. I find most of them uninteresting as there is a common repetition of all-too-familiar music. (Just think of how often the name Chopin and Kreisler appear in piano/violin encore discs). But this encore disc comes with a programme, made up of arrangements and transcriptions of opera music. Faced with it, I was eager to listen to Gil Shaham for the first time, and along with this unique programme, could not resist the temptation. 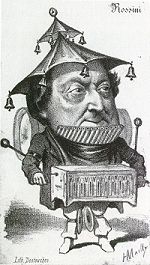 Off to a flying start, the disc starts with an outrageous Paraphrase on “Largo al factotum” from The Barber of Seville by Rossini. Cheerful music created on the theme, the difficulty that is posed to the performer is brushed off by Gil Shaham’s skills as well as the music’s mischievious and almost hilarious character. A very playful and energetic way to start which sets the mood, for more is to come.

I never realised that Sarasate did a transcription of favourite tunes from Mozart’s The Magic Flute till I heard it here. This Fantasy is not a piece interested in a display of violinistic skills at all, unlike most of his other works. I find this lack of showiness interesting. The various melodies are given a light and delicate treatment, and its sensible arrangement makes up a single continuous piece without dividing the music into parts as in his Carmen Fantasy. Gil Shaham’s high register really sparkles with crystal clarity here, quite a necessary prerequisite in my opinion to carry off Sarasate’s music well.

An enchanting account of Gluck’s “Melodie” from Orphe et Euridice is delivered before the programme wanders off to Paganini’s “I Palpiti” from Rossini’s Tancredi. One can hardly feel that this is virtuosic music written by Paganini when Gil Shaham makes light of the technicalities. The result is charming music which is smooth in its flow, while other violinists, even greats like Grumiaux, seem too busy with just managing the notes to make it sound like music.

Featured modern composers here include Prokofiev, represented by the sardonic and brief (lasting just over a minute) “March” from his opera The Love for Three Oranges, and Richard Strauss with an arrangement of his Rosenkavalier waltzes. The latter is quite a satisfying showcase of the various waltz themes included in the orchestral version of the music. From the opening piano introduction, there is the sense that the arranger, violinist Vasa Prihoda, has injected some ‘caf style’ (quoting from notes) touch to give the delightful music more flavour and a suave presentation – wonderfully touched with Viennese waltz atmosphere – this is my personal favourite of the album.

Gershwin’s most famous operatic hit Porgy and Bess is represented here by a Heifetz transcription of some of its popular themes. Gil Shaham’s smooth and gliding tone can only be described as tantalising: just listen to the introduction, his portamentos and slides which allow the music to flow and ebb. Fritz Kreisler also contributes the luscious and haunting “Hindoo song” from Rimsky-Korsakov’s Sadko.

Finally, the disc ends with violinist Jeno Hubay’s arrangement based on Bizet’s Carmen, a refreshing change from the usual Sarasate or Waxman arrangement. No less dazzling than Sarasate’s version, it is casted as a single work without movements and includes the Torador march and Micaela’s aria which is ignored in other arrangements.

I really like fun and interesting music and this disc appeals to me for its entertaining value, while most other encore pieces compilation are done just to showcase virtuosity. As Gil Shaham puts it himself, “there is an inherent temptation for violinists to reach out for the instrument” when a beautiful melody is heard being sung, and that is probably where all these pieces have their origin from – the desire to play what is sung, the desire to make one’s instrument sing. They capture a snapshot of the operas by condensing the most memorable tunes in it together. Maybe this will remind one of the opera house when operatic performances are few and far between these days.

Ong Yong Hui is actually a big bad wolf whose futile attempts to prey upon a baby Dino is contemplated upon by Hamlet.