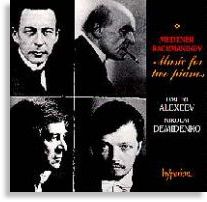 According to Rachmaninov, the 1897 premiere of his First Symphony was a disaster because of Glazunov’s unbelievably bad conducting. [He was drunk. Please see here for more info. – Ed.]. After the fiasco, he became severely depressed and lost faith in his own abilities as a composer. When two years spent trying to recuperate failed to yield any creative output, his uncle sent him to see Dr Nikolay Dahl, who specialised in treatment by hypnosis. Whether the improvement was due to hypnotism, or from extended conversations with the doctor (himself an accomplished amateur musician), Rachmaninov nevertheless regained his enthusiasm for composing. He was so grateful that he dedicated his fresh work, the famous Piano Concerto No.2 Op.18, to Dahl. 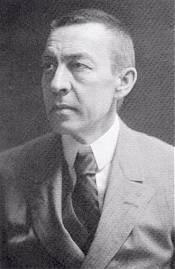 The four movements of the Suite No.2 in C, op.17 were written in-between the three movements of the Second Concerto, and stylistically resembles its more popular cousin (Rachmaninov’s life was strewn with cousins: his teacher Alexander Ziloti was his cousin; and he married his first cousin Natalya Satina against the laws of the Orthodox Church). Though Rachmaninov’s two-piano works are considered heavyweights in the Romantic repertoire for four hands, they are still lesser-known and lesser-played than they should be.

Essentially a tour de force in rhythm and unstoppable momentum, the Suite No.2 in C, op.17 opens with a bounding hot-blooded Alla Marcia, its theme explored and expanded in the recurring arches stylistically reminiscent of the Second Concerto.

The unforgettable second movement, a Valse floating on a cascading moto-perpetuo fingerwork and interspersed with a more luxuriant middle section, showcases simultaneously the demanding virtuosity and passionate bittersweet romanticism of the youthful Rachmaninov. The third movement expands some of ideas of the preceding two movements into a languid, dreamy Romance.

The fourth movement, a Tarantelle, is an exhilarating whirlwind that fits its supposed origin from the mad dance of a person bitten by a tarantula, trying to expel the lethal poison (readers, don’t try this at home). The notes twirl around the pianos in a crazy jumble, with the intoxicating minor-key melodic idea developing in between the non-stop barrage.

The Russian Rhapsody (op. posth.), a set of variations on a Russian folksong, was written while Rachmaninov was still studying at the Moscow Conservatory. It was the 18-year-old composer’s rebuttal to someone who had challenged that nothing could be written on this particular theme. Whoever it was, he should have known better!

This two-movement work starts off with the folksong, pure and simple. The variations then begin, with the melody being repeated with various embellishments, which become more and more complex and start to transcend the variation form. The melody now metamorphoses into various characters, sometimes tender or meditative, at other times launching into an energetic rustic dance. The listener may also be able to discern a tinge of Tchaikovsky, the young Rachmaninov’s hero.

Nikolai Medtner (left) has been long overshadowed by his friend and compatriot Rachmaninov. Only recently is he being increasing recognised outside Russia as a notable composer in his own right. The Two Pieces Op.58, written after the composer had left his native Russia and settled in Britain, reflect his heritage and the memories of his motherland, which the listener can practically see and experience, immersed in the unique harmonies and melodic inflections.

The Two Pieces begins with the elegant Russian Round-Dance (A Tale) which is in the form of a khorovod, a type of brisk Russian dance-song. Though the composer left no hint as to the story of the work, the second piece, Knight Errant evokes the Russian brilliance and splendour of an age past. In it we hear the colourful adventures of a noble knight on his trusty steed, galloping to conquer yet another empire; there are stately Tsars in golden palaces and dancing courtesans; towering cathedrals loom above treacherous ravines, flanked by dank forests. The atmosphere is rich with the mythical heroism and grand legends of golden Russia, vestiges of which can perhaps be gleaned from the exotic Basilica of Moscow’s Red Square. 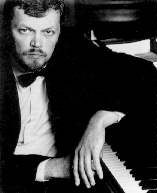 This recording concludes with Rachmaninov’s final work, the Symphonic Dances Op. 45, heard in its pre-orchestrated version for two pianos. Being his last opus, the Dances can be seen to summarise his entire life; especially the third movement, where the Dies Irae motif, perhaps symbolising Death, is superseded by a Russian Orthodox chant, “Blessed be the Lord”, signifiying the victory of God over Death and Rachmaninov’s final embracement of the Church (he was not so keen on religion when he was younger).

Alexeev (right) and Demidenko (above left) are no strangers to piano music lovers, especially those who like their romantic repertoire with a heavy dose of fiery passion and effortless virtuosity. As a duo, they match seamlessly and draw on the additive possibilities of having two greats play together. For the most part they deliver a powerful and potent performance, giving Medtner’s stoic heroism and grandeur of vision plenty of airing. However, do not expect to weep with sorrow in the subtler passages of Rachmaninov’s writing: both pianists are strong soloists who do not allow for sensational or poignant emoting. Just as well, for these large-scale works were never meant to sentimentalise; Rachmaninov himself never dwelt too long on the misfortunes of his life.

In Singapore, Hyperion discs are available at or can be ordered from Beethoven Record House (Centrepoint), HMV (The Heeren) and Borders (Wheelock Place).