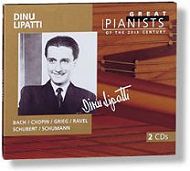 Philips Classics has recently launched the series Great Pianists of the 20th Century, compiling recordings of the top (74) pianists to have appeared in this century, totalling 200 CDs to be released over the next few years. I must say, the golden-brown packaging is among the most attractive that I’ve come across. And 200 CDs honouring the best piano recordings of this century… imagine!

The fact that Dinu Lipatti has been chosen to be one of the most memorable pianists in this century is no coincidence. Though his career was drastically cut short when he died of leukaemia at only 33 years old, his individual and personal style, coupled with a formidable understanding of the works that he performed, left a legacy that few modern-day pianists can match.

I have covered most of the works in The Last Recital and also the two Schubert Impromptus on the second disc in earlier reviews; the exceptions being Bach’s Partita, which in this collection has been taken from a studio recording made two months before his last recital in Besancon; and Mozart’s Piano Sonata in A minor, taken from a recording done in 1947. Understandably the stunning electricity of that final “live” performance is tangibly lacking in these recordings, but Lipatti is remarkably consistent in terms of style, hence in this review I would be concentrating on the recordings found on the second disc.

Schumann’s Piano Concerto in A minor, Op.54 was completed in 1845, and the following year his wife Clara Wieck gave the first performance. This concerto has become very popular, notably for its drama and romance, and its melodies and harmonies that lie easy on the ears. Yet, given its fantasy-like nature, this piece is first and foremost a piece written in classical form.

Lipatti once again displays his powerful and sure playing, but his understanding of the formal architecture of the piece brings depth and authority, giving an overall convincing interpretation without excessively romanticising. Without giving the listener any feeling of being self-indulgent, he is yet able to make the giant opening chords leap, and draw tenderness from the more expressive sections, leaving his unforgettable personal stamp on this concerto.

In the second movement, Lipatti takes the listener into an intimate world where the orchestra and the soloist hold a flowing-and-ebbing conversation. The pianist’s understanding of the musical structure and unstoppable drive is most evident in the third movement, where he shapes the many lead-ins and bridge passages with finesse and a sense of direction. The movement builds up with increasing complexity, aided by Lipatti’s uncompromising runs and strong rhythm, urging the listener on to the triumphant major-key finale.

Grieg’s Piano Concerto in A minor Op.16 is considered by many to be a musically inferior, albeit inspired, version of Schumann’s own Concerto in A minor. Having a very similar architecture to the latter concerto, Grieg’s concerto nevertheless poses a technical challenge to the pianist, filled with crowd-wowing arpeggios and over-the-top, sweeping grace notes interposed between the notes of the chromatic theme. Indeed, this concerto makes for an excellent showpiece for the virtuoso soloist. 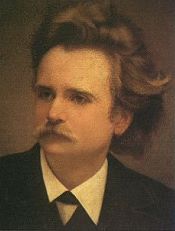 Lipatti’s shaping and direction of the piece, however, does not allow for any sprawling romantic virtuoso playing. Instead, his powerful technical control enables him to take this concerto effortlessly without any showy finger-twisting bravura. This gives him the space needed to develop the thoughts and meanings behind the simple but endearing opening theme (its reprises in various forms so often clouded by glittering waves of ornamentation under other pianists). To the point where the virtuosic writing risks seeming almost underrated, what comes across is a clean and crisp distillation stripped bare of tortuous (and torturous) bravura playing. The simple expressivity that Lipatti is capable of heightens this concerto to a new peak of sensitivity: just listen to the chorale-like second movement for an example of how this languid idyll can be built up to a ground-shaking intensity.

The main drawback, evident from these two concerti, is the quality of orchestral sound that has been sacrificed to restore the soloist’s playing: a necessary evil for remastering historic recordings. At times the orchestra may sound distorted and flat (especially during certain oboe solos where the poor instrument is reduced to a jarring squeak); fortunately most of the time its warmth and expressivity has been adequately preserved to match Lipatti. The excellence of the orchestra and the conductors is not lost either – just take for instance the opening orchestral section in the second movement of Grieg’s concerto.

The quality of recording in Chopin’s Nocturne in D flat Op.27 no.2 is considerably inferior to the others, with static becoming audible at the volume needed to hear all the notes. Yet, listeners should thank their lucky stars that this piece has been included, for it reveals the beauty and poetry that matches Lipatti with Chopin, phrase by phrase, showcasing the sensitivity of the pianist’s touch. Never using too much rubato (which Chopin himself did not approve of, to the point where he purportedly trained his pupils using a metronome), Lipatti lets the melody drift above the gently lapping left hand, just like the tranquil moon shining against the dark night sky – the perfect realisation of a nocturne.

A chorale from Bach’s Cantata No.147 has been transcribed for solo piano under its famous title “Jesu, Joy of Man’s Desiring” by Dame Myra Hess (1890-1965), herself a much-celebrated pianist. Though this popular transcription looks simple on the score, it is not easy on the fingers. Yet again, Lipatti’s formidable technique allows him the necessary space for fully expressing the inner beauty of a piece. Amongst his extremely even triplets which carry the harmony, one hears the crotchet inner voices, singing so clearly and distinctly as characteristic of Lipatti’s contrapuntal playing (listen to his Bach Partita). On top of that, one gets a sense of bliss that seemingly flows naturally from his effortless playing; the slower, more tranquil voices interpose with the perpetuum-mobile harmony to create an indescribable sense of inner peace.

The quiet after this last track seems almost sacred; perhaps a fitting epitaph for the musician who has transcended music and soul, life and death. Eight words: Lipatti has to be heard to be believed.

Soo Kian Hing has rounded up his three-part tribute to Lipatti… hope everyone has enjoyed reading it as much as he had writing it. And, oh, of course he has immensely enjoyed listening to Lipatti too….