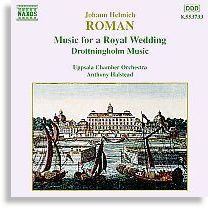 Swedish Baroque composer Johann Helmich Roman wrote his Drottningholm Music for the wedding of Adolphus Frederik and Princess Lovisa Ultika, in August 1744. The wedding, held at the Palace of Drottningholm, lasted four days. Throughout the festivities, banqueting and ceremonies, Roman and his fellow musicians provided the music. The set of 24 pieces of the Drottningholm Music were not played in sequence, as having it on CD here suggests, but were selected and arranged as the occasion required. Roman also kept eight pieces in reserve, which are known as the Little Drottningholm Music.

OK, OK, you want to know how it sounds like, right?

It’s very friendly and entertaining, very easy on the ear and yet interesting enough to make the brain go “Ah!”. The pieces average 2 minutes each – little pieces of aural candy! The melodies are all there and the orchestration a delight. Roman was greatly impressed by Handel when he was in London from 1715-1721. The influence can be seen in some of the pieces here which display a ceremonial pompousness coupled with that dancing momentum. The use of wind, including horns and trumpets, is apt and happy. There are also a few places where timpani are used, but never to the point of being militant. 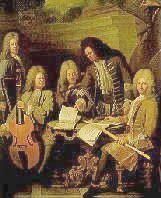 Besides the Handelian influence, I could not for the life of me shake the feeling that Roman was also influenced by Rameau (try his Orchestral Suites. ), from the French side. A prime example of this is the Andante and Poco allegro on tracks 5 & 6, with its light tread, its graceful curves, the scoring for high woodwind and that whiff of Rococo sentimentalism. Another one I particularly enjoy is the Andantino from the Little Drottningholm Music.

One thing I noticed was the fact that although some of the pieces are marked “slow”, almost all these are of moderate tempi. True “walking” andantes, I suppose. Anyway, as moderately-paced Baroque pieces go, they are some of the most contented and simply happy gems.

Such music, despite its immediate melodic appeal, can become tiresome. At worst, this could be called Baroque elevator music. Nevertheless, taken on its own, the richness of the Drottningholm Music is very impressive. The light touch of wit that Roman displays is also evident.

This disc should also be praised for the committed and very spirited playing of the Swedish Uppsala Chamber Orchestra. Although it is a modern orchestra, their sensitivity and appreciation of Baroque performance styles is – and I really must say – perfect. For a long time I wasn’t sure at all whether I was listening to a period- or modern-instrument ensemble. But after a while – who cares! Credit also goes to their conductor Anthony Halstead, who has worked with many of the best British period ensembles, and plays the natural horn himself. The performers were recorded in a church, not at all reverberant, and which gives the music a nice open-air space to breathe.

In conclusion, if you’re looking for a Baroque revolutionary, look elsewhere. If you just want pure unadulterated, happy music, buy this. If you’re holding one of those serene open-air garden parties for a wedding, buy this. Leave it in the background and enjoy.

Chia Han-Leon believes in merry open-air weddings, not claustrophobic restaurant farces with over-practised, loud-mouthed hosts whose name you don’t even know. Or care.