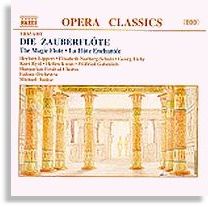 CAUTION: Libretto in German only, with English, German and French synopses.
This review is kindly sponsored by Rock Records.

My first exposure to opera was hearing Lucia Popp delivering the Queen of the Night’s aria “Die Hlle Rache kocht in meinem Herzen”, conducted by Otto Klemperer. The bell-like quality of her highest tessitura coupled with her accurate execution of these coloratura passages made such an impact on me that all my future references to this opera were measured against the Queen of the Night and this aria.

Left: Detail from setting design by Simon Quaglio for a Munich production, 1818.

It was also in this recording (EMI CDS 555173-2) that I was introduced to the voices of Mozart specialist Gundula Janowitz (who sang Pamina) and Nicolai Gedda (in the role of Tamino), both known as style-conscious singers. However, the most eye-catching, and no less ear-catching, roles to me were the comprimario roles of the Three Ladies, more than ably sung by the renowned Elisabeth Schwarzkopf, Christa Ludwig and Marga Hffgen.

There are numerous books published analysing this opera with references to Mozart’s Masonic beliefs. Personally, Die Zauberflöte is a fantasy opera; one need not dwell into the intricacies of deconstructing each role and its representation, in order to enjoy Mozart at the most basic level.

The premise of this opera is simple. Young prince Tamino is saved from a serpent by Three Ladies, who were followers of the Queen of the Night. They then entice him with a picture of Pamina, the Queen’s daughter, whom they claim have been snatched and held against her will by the evil Sarastro. Smitten by love, Tamino agrees to save her. 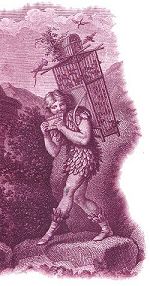 At the beginning of his adventure, he befriends a mischievous half-bird half-man character, Papageno. Tamino soon discovers that Sarastro is not the evil character that he is made out to be. He is in fact the leader of a group who believes in Wisdom, Reason and Nature. Upon realizing the truth, Tamino soon ventures to be initiated into Sarastro’s order. At the end of these trials and tribulations, he is joyously joined by Pamina, as Sarastro ultimately defeats the Queen of the Night and her henchmen.

And here is an excellent recording released under the Naxos label with Michael Halszconducting the Failoni Orchestra of Budapest and the Hungarian Festival Chorus, together with an international cast of Elisabeth Norberg-Schulz (Pamina), Herbert Lippert (Tamino), Georg Tichy (Papageno), Kurt Rydl (Sarastro), Hellen Kwon (Queen of the Night) and Wilfried Gahmlich (Monostatos). I believe that their engagements at the Vienna State Opera with Halsz led to this recording. Halsz was the principal Kapellmesiter under Christoph von Dohnanyi in Frankfurt, and later followed Dohnanyi to the Straatsoper in Hamburg. In 1991, Halsz was appointed the Resident Conductor of the Vienna State Opera.

The excitement of this opera begins with a very brisk and crisp overture, in the manner that Halsz wants to tell this fantasy tale. Halasz maintains good control over the orchestra in terms of pacing, phrasing and general musicianship. Throughout this recording, the orchestra sounds lush and full.

From the first utterance of “Zu Hilfe! Zu Hilfe!” we become immediately aware of why young Austrian tenor Herbert Lippert is fast becoming one of the most sought-after lyric tenors in the world. He made his Vienna debut at the State Opera in 1990 singing Tamino; four years later, he debuted at La Scala in Die Entfhrung aus dem Serail with Wolfgang Sawallisch. Since then, he has become one of Sawallisch’s protgs, appearing with him regularly. He has also sung under other luminaries such as Nikolaus Harnoncourt, Bernard Haitink, Kurt Masur and the late Sir Georg Solti. 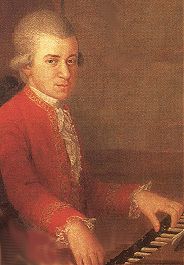 The fact that Lippert has performed this role numerous times is evident in this recording. He keeps close watch to the difficult, long, legato Mozart lines, while maintaining a beautiful and mesmerizing tone throughout. In his first big aria, “Dies Bildnis ist bezaubernd schn”, Lippert brings Tamino to life – full of fervour and ardour, a virile, sensitive, young Prince, out to save the one person whom he has fallen madly in love with.

In my research for this review, I could not find much information about the soprano Elisabeth Norberg-Schulz. The only available information was her recent appearance with Jane Eaglen at the Teatro Comunale di Bologna’s Turandot, for which I assume she sang the role of Liu opposite Eaglen’s Turandot. However, the programme notes provided information that Swedish-born Norberg-Schulz is a soprano worth watching for. Having been tutored by the likes of Hans Hotter, John Shirley-Quirk, Peter Pears and Elisabeth Schwarzkopf, her distinguished career has taken her to leading opera-houses of Milan, Salzburg, Vienna, Berlin and London. Whatever the case, this recording captures her beautiful voice amply. “Ach, ich fhl’s, es ist verschwunden” is delivered with so much earnest passion and heartache that one immediately sympathizes with Pamina’s plight.

Hellen Kwon and Kurt Rydl sing the warring duo in this opera, the Queen of the Night and Sarastro, respectively. Going against the grain of traditional opera where the bad guy is usually sung by a low voice and the good, a high voice, Mozart reversed the polarity by writing a dizzyingly high coloratura part for the evil-doer opposite the earthy bass good guy.

The one person whom I had the highest expectations to ‘meet’ was Kwon. Undeniably, Kwon’s middle and low registers are beautiful, well-placed and covered. However, above the staff, especially from the high C onwards, she sounds shrill and sharp. All the staccato notes in her second big aria were taken at a tempo that appeared as though she just wanted to get through the passages as quickly as possible. 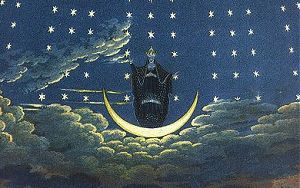 In coaxing Tamino to rescue her beloved Pamina, Kwon’s Queen sounded mellow and pleading, which was later contrasted brilliantly in her second vengeful-sounding aria. In fact, Kwon would do well with a little more steel in the voice for this role, if she had settled comfortably into the highest tessitura. Listen to celebrated Gruberova’s interpretation of this role (EMI CDS 747951-2) – she sure sounds like a woman gone mad with vengeance to me!

Kurt Rydl’s Sarastro sang with much authority in his weighty bass voice, thus showcasing his firm grounding in the Old School of training. Rydl has an extensive repertoire, ranging from Beethoven, Bellini and Donizetti to Verdi, Puccini, Wagner and Strauss. Although he is mindful of delicately phrasing his long lines, the voice shows signs of wear and tear in a slight wobble. Nevertheless, the wobble adds to the aural effect of one so old and wise as Sarastro.

Unfortunately, Georg Tichy’s Papageno was a disappointment to me as well. I had a continuous feeling that this baritone role lies above Tichy’s comfortable range; all the notes above his passagio did not sound settled nor secured. He also displays a disturbing lack of accuracy in intonation. Most of his notes are not sung spot on, whether the tempo was slow or fast. While it is undeniable that he relishes singing this playful and notorious character, I just wished this Papageno would sing in tune.

As a unit, the Three Ladies comprising Julia Faulkner, Waltraud Winsauer and Anna Gonda sound well-balanced and complementary. However, the Second Lady of Winsauer sounds like she sang with cotton in her mouth, a fact made more apparent in her solo lines. 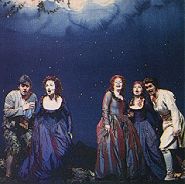 On the whole, this budget-priced recording is a delightful introduction to this wonderful opera; the music is kept brisk and fresh, and the singing maintained at high standards generally. Most of the singers outdo themselves, balancing the drama of this opera with a good dose of the whimsical. The beauty of Mozart’s music was delivered naturally and gorgeously in most instances. If you are a beginner, wanting to explore this particular opera without paying too much, this is a great budget-priced buy (but watch out for the lack of a full translation for the German libretto). Even if you are an experienced connoisseur looking for a fresh set, this recording on the Naxos label makes a worthy listen. Go for it!

Kerryn Chan is Scorpio Boy – faster than a spider’s pounce, more legs than regular arachnids, better theme songs than Spiderman – watch him as he spins his stinging tail all over the web…