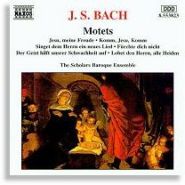 Includes libretto in German with English translation only.

The Scholars Baroque Ensemble was founded in 1987 by David Van Asch to complement the work of the existing a capella vocal ensemble “The Scholars”. Since then, they have received attention in their collaborative effort with Naxos on a number of recordings, including Bach’s St. John’s Passion and Monteverdi’s 1610 Vespers; all of which are performed with original or copies of such instruments. Additionally, members of this group are all Baroque specialists. The Scholars Baroque Ensemble performs music without a director. This is interesting. Further, in this and their other recordings, the works are given an all-soloist treatment, as in the Cantus Clln version directed by Konrad Junghnel.

A few impurities are detected here and there throughout the recording. The tenor entry in bar one of Jesu Meine Freude could do with more cover, less nasal quality and very generally, a rounder more consistent tone. Further, parts of the Singet dem Herrn ein neues Lied where running notes abound are hampered by some struggling heard in all the voice parts.

Left: Detail of a portrait of Bach with the first son from his second marriage, Gottfried Heinrich. This is one of three portraits thought to be authentic depictions of J.S. Bach.

Tempos throughout are neutral and very little imagination or liberty is taken with the scores – though this could be the result of them performing without a director. It should not have been a limiting factor. Astute musicality would not have permitted an impassive reading, nor a performance without significant colouring of the voice parts in relation to the text.

This recording has excellent sound quality, the placement of the voices are very well done. These are excellent voices we are talking about. The sopranos are admirable; though not quite as pure as trebles, they are enjoyable voices. The countertenors would need to be a little more ethereal, a little more gentle to bring out the flavour in “So aber Christus in euch ist”, after all the words “the spirit is life” – “der Geist aber ist das Leben” – would benefit from a spectral temperament. Tenors and basses are efficient and despite the brighter, rougher tone, does not disrupt the performances. Notes are short and an unsustained approach seems to be the intention. Phrasing suffers a little from the broken legato lines, however, the overall effect, intended or not, is more than acceptable.

The Scholars Baroque Ensemble should seriously consider a more involved approach and perhaps then achieve a more considered empathy with this great music; with or without the help of a musical director to concentrate solely on shaping the performance.

To end, this recording makes an excellent recommendation for anyone intending to have a copy of the Motets in their collection but is not willing to pay full-price for one of the other recommendations in this series of reviews. The technical merits of this recording cannot be questioned. Nowhere do the Scholars suffer from any intonation problems and with minor exceptions, ensemble work is clean and effective. In this view, this recording is worth even full-price.

NG YEUK FAN believes that the few revered conductors past and present was/is successful because they bring to music performance wisdom – wisdom that is non-communicable save through the language of the universe – Music.