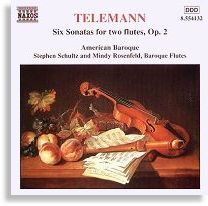 This review is kindly sponsored by Rock Records.

How do you make money as a composer, and a prolific one with thousands of concertos to boast of? You write not-too-difficult music for a small number of instruments, preferably those types which amateurs like to play, and get them published and sold.

I guess this sounds a bit like some of the (in my opinion, disgustingly ubiquitous) Disney-cartoon soundtrack/irritating-song-about-big-sunken-ship transcriptions for orchestra, band, piano, guitar, string ensemble, refridgerator and/or hair-dryer that can be found in almost any music sheet/score shop.

(Don’t mind me, I’m just letting off some steam).

In 1727, Telemann published his Sonates sans Basse deux Flutes traverses, ou deux Violons, ou deux Flutes bec, or “Sonatas without Bass for Two Transverse Flutes, or Two Violins, or Two Recorders”. Quite a mouthful for any music librarian…(Yes, my dear Inkpotters, I’m sharing a private joke with you all)… and suddenly one is thankful for nicknames.

So successful were these pieces, apparently, that they were republished quite a few times up to 1740. Basically, these four-movement slow-fast-slow-fast sonatas, averaging 11 minutes a piece, can be played on any two melody instruments, preferably in tune.

[Interlude: How do you get two piccolo players to play in tune? You shoot one!]

Bad joke. I’m not implying that the two flutists here are harmonically challenged. In fact, their intonation as a duo is very very assured, almost too perfect. And as any woodwind player will tell you, getting two woodwinds to play in tune, *especially* two flutes, is one of the Eternal Problems of Music Performance.

The problem I have with these performances is that they lack contrast and colour, even between Sonatas of major and minor keys. From track to track, there is at worst a monotony of empty lines of pleasant sound that Baroque music has sometimes been accused of. Perhaps it is a result of the use of authentic Baroque flutes (both copies of Rottenburg instruments, c.1745), but I’m not convinced. I’ve had my experiences with wooden flutes (albeit of the Chinese bamboo variety) and I know for sure they have their unique abilities of colour and especially ornamentation.

Perhaps it is a problem of interpretation, including ornamentation. Although I do not have the scores of the Sonatas to check, I find the performances here by Schultz and Rosenfeld of the American Baroque to be rather flat-lined, with only the simplest of ornamentation, and that done with disappointing routineness. The flutists achieve an admirable flow of line, demonstrated in the slow movements, but it lacks that curve and sensation of phrasing which should make the music come alive. I am also unimpressed by Baroque trills executed without the leading rubato-accelerando. They suggest that the performers are not “feeling” the shape and “Baroqueness” of the music.

Maybe it’s just the music. Composed, apparently, for an amateur market, it would be unfair of me to look for, as they say, “High Art”. But I still cannot shake the feeling that there is something here which has almost always made Telemann the “lesser” composer as compared to Bach or Vivaldi. If you ask me, the most impressive of the Sonatas is No.3 in A major, with its swaying Siciliana, the playful Vivace, a thoughtful Andante, and a 5-minute Allegro of purpose and lively delight.

On the less formal side, sometimes we just want simple music. If you are content to leave two flutes chirping or crooning away in the background, this can be a useful disc. If you are a flutist, you might be better off spending your money on the scores for these Sonates sans Basse deux Flutes traverses, ou deux Violons, ou deux Flutes bec, Op.2, if you don’t have them. You can practise your French with the title, and play the Sonatas with a friend. I think duets are best served “live”.

In Singapore, this disc can be easily found at or ordered from Sing Discs (Raffles City), Tower (Pacific Plaza and Suntec City), Borders (Wheelock Place) or HMV (The Heeren).

Chia Han-Leon actually managed to become the principal flutist of his junior college Chinese Orchestra for a year, although he never realized it until much later, when his embourchre was destroyed by even more years of clarinet playing.