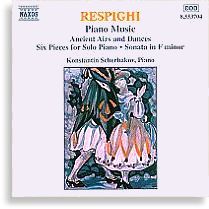 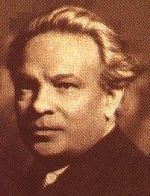 OTTORINO RESPIGHI (left) was born in Bologna in 1879 and died in Rome in 1936 – music history’s most violent period of change. As evident in his works, which are largely unappreciated (it’s funny how the Italians effectively disappeared from the music scene after Vivaldi), he suffers a bit from compositional schizophrenia. You see, after studying in his native Bologna, Italy, he went on to have lessons with Rimsky-Korsakov. Then he visited Max Bruch and had lessons with him. But then it is said that his major influence was from Richard Strauss’s opera Salome. He was thus constantly torn between his classical training and the brilliant colours of modern orchestration. Respighi is most well-known for his tone poems, including the garish and noisy Roman Festivals, with its companion pieces Pines of Rome and Fountains of Rome.

Respighi’s three suites of Ancient Airs and Dances are modern orchestral arrangements (Naxos 8.553546) of early Baroque dance suites for lute, representing the work he did in reviving interest in Early Music, of which Italy had a long and rich tradition. He also has to his credit three piano concertos, a Concerto Gregoriano and Poema Autunnale for violin and orchestra, as well as a concertante for oboe, trumpet, violin, double bass, piano and strings(!). He is also known for many beautiful songs, as well as eight operas.

The Ancient Airs and Dances (“AAD”?) were also selectively transcribed for piano. They are in fact more folk-like in nature rather than formal in the sense of high Baroque architecture/music. The set of eight pieces here cover a range of moods from the joyful to the melancholy. The Balletto detto ‘Il Conte Orlando’ begins the set, cheerful but also thoughtful. The Gagliarda is a jubilant little piece with a delightful middle section, while the beautiful Italiana is nocturne-like, like an evening stroll in a flourishing garden. Here, Scherbakov’s way with the music clearly demonstrates the dancing element of the music – you can hear the left-hand line dancing with the right. The same fascinating effect is heard in the sad Siciliana. The Passacaglia on piano sounds positively Romantic, and powerful in Scherbakov’s hands. The serene Campanae Parisienses includes a transcription of the love song “Divine Amaryllis”, here performed with more grandeur than one might expect. The set ends with the Bergamasca, and as Shakespeare fans will know, the bergamasque is a dance of joy.

In all, Scherbakov’s performance is best heard in the lighter music, such as mercurial passages of sparkling running notes or the light touch required for nocturne music. His short notes and fairly heavy accenting emphasize the rhythmic element of dance, but he sometimes becomes rather rigid with the louder, running passages, which is harsh on the music. I would prefer a little more “air” and rubato in these cases. On one hand there is a Russian sombreness in the moody pieces, but elsewhere Scherbakov again pounds rather too hard – in contrast to his beautiful delicacy in the lighter moments. Nevertheless, he produces an impressive range of colours befitting the varied moods of the music. 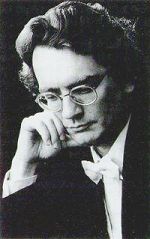 Among the prizes that Konstantin Scherbakov (b.1963), currently a teacher at the Moscow Conservatory, has won include those from the Montreal, Busoni and Moscow Rachmaninov piano competitions. At first, I sort of balked at the idea of a Russian playing Italian music, but the fact that this guy has already recorded Respighi’s Piano Concerto for Naxos (8.553207) invites us to take another look.

In the Six Pieces for Solo Piano, Scherbakov demonstrates a happy kinship with the music, starting with the “salon” style Valse Caressante – the kind you would hear in some Parisian sidewalk cafe. His touch here is appropriately “French” enough, injecting the lyrical melody with an elegant air of light humour. A thoughtful Canone follows, which floats between sadness, angst and dream. The third piece of the Six Pieces is a Notturno, a Debussyian work that is both understatedly sorrowful in its apparent carefree delirium – very French and very fine in Scherbakov’s hands.

In the playful Minuetto, Scherbakov makes good the delightful interplay of the different sections, all very effective and heartwarming. This preceeds the 1½-minute Studio, full of bright writing in running passages. And finally we reach the Intermezzo-Seranata, with emphasis on the “serenata” – this is easily one of the most beautiful pieces on disc, a contented serenade with touches of Romantic yearning. Scherbakov’s lighter mode is effective here. Throughout these pieces, his vision of the Pieces is unified. The piano colours could do well to be a bit more varied, but otherwise the playing itself is very finely moulded.

The Sonata in F was published 50 years after Respighi’s death. It is operatic in character, starting with a dark Allegro distinguished by its Mephistophelean opening theme. The Lento is likewise dramatic in character. The final Allegretto begins in “chase” mode and is an agitated piece. Scherbakov’s style fits the music well, though the dramatic elements could well be presented with more forcefulness.

Here’s something interesting: Three Preludes on Gregorian Melodies. Returning to quieter vistas, Scherbakov’s expressive powers can be heard in the hypnotic strains of the Molto lento, with its spiralling scales and tentative musings in Phrygian mode (white keys on piano beginning with E). In the Tempestoso, the “chant” appears first in the bass lines, rigourously moving forth and leading to a gentle central melody of noble tranquility. The final Lento returns again to the meditation of the first movement. Employing a melody over a repeated note, as the notes say, is a “continuing feature in music of contemplative serenity”, and this is how the disc ends.

Chia Han-Leon has finally completed and handed in his thesis on Goethe’s Faust and the Divine Feminine. All bloody 11,798 words.

Back to the Classical Index!… or read previous piano reviews and features in the Inkpot archives.