The Essential Richter – The Pianist of the Millenium 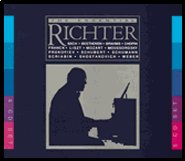 “Richter is capable of learning one bar for an hour or two or three hours; more than once I witnessed him while practising, playing one page at least seventy times. Sitting in the next room listening to him, I was literally losing my senses. But he himself, whose patience in this sense has no limits, repeated the same passage again and again…” – Andrei Gavrilov.

A tall, haunted-looking man sits at the grand piano on the stage of a deserted auditorium. In the early hours of the morning he is playing music which he has already performed several hours previously for a large and enthusiastic audience. In his quest for artistic perfection he is “revisiting the scene of the crime,” hoping that by replaying the programme from beginning to end he can assuage the sense of personal dissatisfaction he feels with the concert. The place could be any where in Europe, the former Soviet bloc, Japan or the United States. The pianist’s name: Sviatoslav Richter.

Such behavior was but a single facet of the mythology which grew around this extraordinary artist: one of the greatest pianists of out time, indeed perhaps of all time. Those other facets include his reputation for canceling concerts at the last minute, the extreme variability of his public performances, his bizarre sexual proclivities, his drinking bouts, the febrile nervousness and vulnerability he exhibited onstage, his preference in latter years for intimate performing venues, the extreme personal interpretations which could provoke wildly contrasting reactions in his listeners. Yet far more important than any of this is the reality : in a musical universe where conformity and unimaginative competence are commonplace.

Richter was a planet apart, characterized by a positively leonine authority, technical prowess which knew no boundaries, and the type of artistic attitude which always sought to place such prowess at the service of musical expressiveness. For Richter the music itself was everything, much more significant than image, audience adulation, critical acclaim, concert agents, career, publicity and fame. I would estimate that, in this way, he was distinctly different from over 90 % of performing and recording artists active today.

Even before making it to the west, there was news of this gargantuan pianist. Emil Gilels was already making headway into the West and it was only the victory of Van Cliburn at the first Tchaikovsky Competition did we hear of Richter whom he described as someone beyond words. Richter was already making the news with his solo recitals at Aldeburgh which consisted of three Schubert works: the E minor Sonata D566, the A-flat Variations (piano duet with Benjamin Britten) and the great B-flat Sonata, D960. From the ominous opening chord of the earlier sonata one is stunned, struck by his originality and fiery intensity. Everything was focussed on the musical message, not an external display or a desire to impress his listeners.

In fact it was said that his Aldeburgh festival performance of the B-flat sonata lasted 48 minutes but this grew longer as the tour went on, increasing to 52 minutes at Amsterdam. Yet on other occasions it seemed as if he ran on stage and began playing immediately. He rushed through Haydn, Weber, more Schubert, the Franck Prelude, Chorale and Fugue and the Liszt B-minor Sonata. Julius Katchen, who listened to him, remarked however that it was a “magnificent failure”. Louis Kentner, Liszt’s last student, remarked that he found his performances strange and did not agree with everything he was doing. However the immense pressure on any artist billed as “the world’s greatest pianist” must have been appalling, and Richter’s reported nervousness was utterly understandable.

The man’s repertoire was vast, ranging from Bach and Handel to works written for him by contemporary Soviet composers. He often gave recitals devoted to music by a single composer (especially Schubert and Schumann), played an all-Beethoven program at his New York debut in 1960, frequently performed lots of Liszt, Chopin and Brahms, repeatedly displayed his fondness for Scriabin and Rachmaninov, and moved into the more specialized domain of Debussy and Ravel. He also demonstrated an interest in 20th century music by Stravinsky, Bartok, Hindemith, Schoenberg and particularly Prokofiev, a personal friend who entrusted the premiere of his Sixth Sonata to Richter while the latter was still a student and later dedicated his Ninth Sonata to him. His performances of Prokofiev’s sonatas and concerti set a standard which hordes of Soviet and Western pianists would avidly aspire.

Fortunately for us, the recorded legacy is almost as extensive, some works existing in two or three different versions, the complete Preludes and Fugues and other works of Bach; Handel’s Suites; Haydn Sonatas; Schubert Sonatas; and sets of pieces of Weber, Schumann, Liszt, Chopin and Brahms; music from the French school; and numerous works by Russian composers: Mussorgsky, Tchaikovsky, Scriabin, Rachmaninov, Prokofiev and Shostakovich. This is merely his solo repertoire; there are concerto recordings made with various conductors – Karajan, Mravinsky, Kondrashin, Maazel, Kleiber. Richter also worked with the world’s leading singers of the day, including Schwarzkopf, Vishnevskaya and Fischer-Dieskau, and we have some wonderful recordings with the last (from the 1960s and 1970s) of Schubert, Brahms and Wolf lieder. A special partnership developed with the Borodin String Quartet, with recordings of the piano quintets of Schubert (the “Trout”), Brahms , Dvorak and Shostakovich. Another special relationship was with his compatriot David Oistrakh. Richter and the great violinist had played Prokofiev’s F minor sonata at Stalin’s funeral in 1953, and this interpretation is preserved on an old Melodiya recording , alongside sonatas by…

Teaming up with his close friend, Russian cellist Mstislav Rostopovich. Their duo recital of Brahms E minor and Grieg Sonatas brought together two musical giants. Altogether this is a most impressive bequest to posterity, though it sometimes appears uneven. Richter was totally unpredictable- his moody temperament and as such it was remarked by many critics who said that no two similar programmes ever sounded a like even if it was a concert the following day. However somehow his Philips Digital Classics do not always show him at his best. Harold Schoenberg once commented that Richter was ‘ introspective, erratic, capable of flights of imagination and also of inexplicable gauberies’

Where do we place Richter in the pianistic world? How did he differ from his contemporaries? What were the essential features of his art? He was born in 1915 during the tense years of World War One, the other significant pianists from the period are also legends in their own right that of Bolet, Gilels, Wild , Macuzynski and Dino Lipatti, thus he was in that group that was born the in the period just after the turn of the century. I would therefore put him also in the likes of Claudio Arrau, Michelangeli, Anda, Katchen Paul Badura Skoda. Despite personal differences, the figures in this pianistic rollcall represent a gradual shift in style and repertoire predilections as the century progressed. It is virtually impossible to attach any labels to Richter . It is said that he was both adherent to the ideals of the traditional Russian pianism of Anton Rubeinstein and yet rather forward looking in approach. As a fascinating fusion of the archetypal romantic and modern pianist, he stands somewhere between flamboyance and emotional freedom of Fisher, Rubeinstein and Horowitz on the one hand and yet still possessing some of the qualities of the cerebral players like Brendl.

An exceptional side of Richter’s makeup was his remarkable versatility. He was a talented painter, conducted the premiere of Prokofiev’s Symphony concerto for Rostopovich( his sole public appearance as a conductor). I bet many of you do not know this- Hey was quite a good cellist as well. In 1961 when he gave a performance with Rostopovich he actually changed instruments with Slava( nick name of Rostopovich).

I suppose one of the interesting aspects of Richter’s playing must be his tone, and I can only suppose that his greatest influence must be that of Neuhaus his teacher. Neuhaus’s own playing shows a deep respect for tonal values and this invaluable tradition is preserved today by the great Romanian pianist Radu Lupu, who also studied with Neuhaus. By common consent it is felt that Richter’s Chopin was generally unexceptional, frequently coming across as rather academic and inflexible. By contrast, his beloved Schubert was luminous and individually conceived, taking in the relentless drive of the Wanderer Fantasy was well as the visionary lyricism of the late sonatas. His approach to this composer was not to everyone’s taste( especially with regard to tempi) yet the playing always carried an unmistakable stamp of authority. His Beethoven too could be mixed: the fact that his father was German musician helped him to identify with much of Beethoven’s output, yet those qualities of mercurial reverie and poetic sensitivity which illuminated his Schumann sometimes rendered his performances of the older composer some what stilted and extreme.

Beyond the slightest doubt is the compelling panache and conviction with which he played the Russian repertoire : his recordings of the Tchaikovsky G major Sonata, Rachmaninov’s second concerto and Prokofiev’s seventh Sonata remain without peer. Indeed his rendition of the first of these works furnishes a fine example of Richter’s genius: he takes what is scarcely one of Tchaikovsky’s most inspired creations and raises it to the level of a masterpiece in a performance of spectacular power and searing intensity. In my opinion this magisterial interpretation single-handedly guarantees him a secure niche in the entire pianistic hierarchy in the piano world

Comparisons may be invidious, but if I had to draw up a short list of the century’s greatest pianists- not merely the most ingenious technicians, the international competition winners or a passing handful of keyboard entertainer- then Richter’s name would be an obligatory starter.

For those of you in Singapore, this set can be purchased (or ordered) from Sing Discs (Raffles City), HMV (The Heeren), Tower (Pacific Plaza) or Borders (Wheelock Place).

Not surprisingly, Chia Han-Leon drinks more coffee than he really should.

Back to the Classical Index!… or read previous Bach reviews and features at the Inkpot