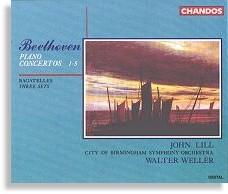 Having sung lately in the Beethoven Choral Fantasy, I must admit that it has settled my idea of the Beethoven concertos as a whole. I remember when I first listened to the Violin Concerto that I thought to myself, “This must be one of the most boring things I have ever heard” — now I find it pure gold. The piano concertos were not easy fare either; I was more used to the flashy virtuosity of Tchaikovsky and other composers. 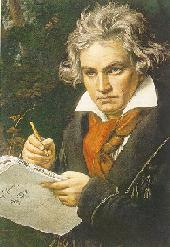 The Choral Fantasy, unfortunately not included in this set as it is in some, contains a myriad of ideas that are later found in the Violin Concerto, the Piano Concerti and the Triple Concerto. The Fantasy was never my favourite; in hindsight, now, I find it a little like a compendium of Beethoven concertos, if you get what I mean, and one of the most quirky and loveable for that. Seeds of all the other concertos are found in this single one-movement piece. What specifically?

Beethoven’s first movement structure is I find very much “just” a set of variations, for example. But Beethoven’s gift for sound and tone makes these mere variations sparkle with invention. He is like Brahms, a genius in the variation. Brahms’ Fourth Symphony’s last movement is virtually a study in this, yet, like Beethoven before him, the variation is only incidental to the overall “programme”, or direction of the piece. The movement in the end never fails to reflect the adventurous spirit of Beethoven.

Do John Lill and Walter Weller live up to this spirit? In spirit of performance, they are on the whole not really adventurous. In the first movements, for example, though they are in themselves very different. Perhaps I could generalize a little: Walter Weller’s shaping of the works is not as accurate as that of Lill’s — he manages to make the orchestral tuttis sound rather un-spirited sometimes. The City of Birmingham Symphony Orchestra (CBSO) is not in top form unfortunately, away from their usual conductor (Sir Simon Rattle, who is by the way leaving the CBSO), they don’t seem to play just as well. Sharpness is lacking, for example, and ensemble though finer than most, could be bettered.

Lill has a nice tone and his virtuosity cannot be doubted, though there is a part in the “Emperor” which I though could have warranted a retake — Lill’s playing sounds a little clumsy. Overall Lill tends to have a more heroic conception of the last three concertos, especially in the first and last movements. Beyond that, I rarely had the feel that the conductor and the soloist were one in conception of the work. I find that the most satisfactory is in fact the Third. This is played well indeed, and is one of the rare chances where the soloist and conductor really seemed to cooperate. The “Emperor”, though not without its faults, is on the whole very well taken — Lill’s own brand of athleticism shows up here, to great effect. He could afford to be more Romantic, though.

The First and Second Concertos, often overlooked in concert halls due to their less memorable tunes and their lesser degree of maturity, are performed in a more understated manner, though again I find that the conductor gets somewhat in the way. These concertos are less demanding where ensemble is concerned, and fare rather better where the pianist is also the conductor. Not the most special playing here.

Perhaps I generalize again, but overall I don’t find the sound very satisfying at all. The piano that John Lill uses doesn’t have the most pleasant quality available — in fact I find it rather lacking in colour and it has a rather harsh tone. Each man to his own I guess. The strings lack body, something I find in some recordings on the Snape label; and the Orchestra is on the whole rather recessed. The piano is much too forward for my liking.

John Lill doesn’t lack experience in these works, on the contrary this is probably the third time he’s recording these. However, for a Tchaikovsky First Prize winner I find his playing a little lacking in spontaneity. He does a fine job with the middle movements, though again, for me, the tone of the piano gets in the way of things.

When Beethoven composed, in between the “serious” works — the symphonies, the sonatas, the concertos, he would also compose Bagatelles, or literally, “jokes”. These are little short solo piano works that include, for example, the famous Fr Elise, to an unknown lady whom Beethoven had admired.

While the complete Piano Concertos and Bagatelles have been recorded many times over, this is probably the first time that they are being presented together in a set. The Bagatelles show a different side of Beethoven’s psyche, and it is good to have them played so well here. Again, I wish for a little more daring, but I am grateful that Lill does not try to overplay these works. He’s more an “un-interventionist” [Oh dear! The Editor disclaims all responsiblity for this word – Ed.], I guess — his interpretation doesn’t get in the way between the listener and the music.

All in all, I find that Lill has pretty good musicianship and his musicality is undoubtable. A pity though, that the sound is what it is — to my ears not the most satisfactory. A worthy listen, though, for that Third concerto, and also the Bagatelles. A rewarding set, in its own way, though it in no way displaces the many sainted recommendations — Fleisher/Szell (Sony Essential Classics, et al for the last three concertos.