The Waltzes by Chopin are not a very prominent series of pieces to listeners, and there are much fewer recordings of them than the famous Etudes or Nocturnes. There was the time when etudes (“studies”) were simply finger exercises for the pianists or at most dazzling fireworks for the piano-bashing virtuosos like Liszt, as with his Transcendental Etudes. However, Chopin’s poetic musical style gives his own Etudes an intimate touch that affected them, imbuing them with much more musical value. Similarly, his Waltzes, composed during the waltz craze in the late eighteenth century, transformed the dance music into something more delicate and gentle in accordance to his music style.“Look at these trees!” Liszt said, “The wind plays in the leaves, stirs up life among them, the tree remains the same, that is chopinesque rubato’.

Liszt’s illustration of Chopin’s famed rubato touch coincides with the idea of the waltz form, where the bass have to play a steady beat to retain the rhythmic dance form while the “melodic lines should enjoy freedom of expression with fluctuations of speed”. This clinical statement nevertheless proves to be true. The Waltzes express a wide gamut of ideas that ranges from boisterous dance movements to lyrical and smooth-flowing music. Yet with such a disparity, underlying these pieces is a strict waltz tempo and a concentration on the beat and meter which are perhaps not found in Chopin’s other works. 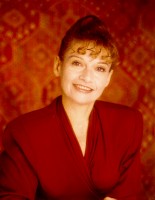 The CD begins with an exuberant Valse Brillante that comes in with repeated attacks of a single key before the waltz starts proper. Here, the piano is strong and is clearly exploited as a percussion instrument, the manner as that of archetypal waltz music full of spirit and vigour. The Waltzes in Op.34 of A Flat and F Major, among several others, are also in the same vein, each of them exhilarating dance music that truly belongs in the dance hall. Idil Biret (left) plays them in a direct and forthright way, highlighting their gaiety and spirit, while Askenazy does it with more delicacy and restraint (his recording is available in various formats on Decca). But considering what the music is intended for, Biret’s interpretation should not be faulted, although they might lack Chopin’s usual touch.

Then there are the spritely and charming waltzes such as the “Minute Waltz” and the Waltz in A Flat Major of Op.43. Playful and capricious in nature, they sound very spontaneous to me, as though they were meant to be improvised pieces. In fact, they remind me very much of the Preludes. Here on, the music can technically be called a waltz, but it does not sound like music that can be danced to, certainly more like abstract musical pieces in their own right.

Some of the Waltzes also bear a resemblance to Chopin’s own Polonaises, stately and grand in style. The Waltz in A Minor (track 17) is played here in an aristocratic manner that links it to the Polonaises. Idil Biret plays it in a noble fashion, unhurried and halting throughout to give the impression of a majestic procession taking place.

The rest of the waltzes are the ones that sound most like the Chopin we know. These are intimate pieces that belong more to the atmosphere of the salon and not to the ballroom. In a way, you can say that Chopin has deviated from the form and intention of the waltz to express himself in the way he does in his nocturnes. I prefer to think that he has exercised his ingenuity to explore the possibilities that the waltz form can be taken to, to make it into something more beautiful and inspired. 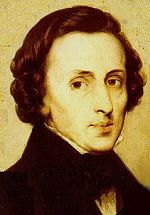 Right: Portrait of Chopin by Ary Scheffer (1847),
from the time of the Waltzes.

In the C Sharp Minor Waltz in Op.64, there is tenderness in the music, and the expressive playing is reminiscent of the Nocturnes. The Grande Valse Brillante in A Minor of Op.34 conveys a wistful and melancholic mood throughout and the frequent use of rubato in the piece makes one forget easily that the piece is supposed to be a waltz. Also in meditative mood is the short introspective Valse in E Flat Major named “Sostenuto”.

With these pieces Chopin seems to be more at home. By reinventing much of waltz music, the waltzes he wrote is in this “romantic waltz” form with that touch of lyrical element in the music rather than the extroverted “Valse Brillante” type of waltz. Biret plays with a fine legato and sense of rubato to draw the listener into the intimate atmosphere of the salon, giving the music a very personal touch with her attention to the nuances of these pieces.

Last but not least, the three Ecossaises, the Contredanse in G Flat Major and the Tarantelle of Op.43 are thrown into the recording at the end to make this CD a very satisfying one. The Contredanse is a piece of simple but elegant music with a relaxed pace that anyone can take to easily. The three Ecossaises are playful and whimsical melodies that bring out another facet of Chopin’s music. The Tarantelle is an energetic dance that is tense and agitated in mood, the music closing with a fierce run up the scale before coming to an end with two final chords.

This CD is also recommended for its detailed notes on Chopin and the origin of waltz music. Included also are notes written by the pianist herself about “Interpreting Chopin” and her idea of the Chopin style of music-making.

If you are in Singapore, Naxos discs can be found at or ordered from Sing Discs (Raffles City), Tower Records (Pacific Plaza & Suntec City), Borders (Wheelock Place) or HMV (The Heeren).Ong Yong Hui finally mustered enough courage to stand potential criticism from the Inkpot’s Piano Freak to produce this review.