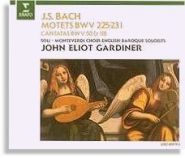 by Ng Yeuk Fan The Gardiner recordings on Erato were mainly made before he climbed the top classical charts. This set of the Bach Motets in particular, were recorded in 1980 in All Saints Church at Tooting. It has since been reissued (without the cantatas) at mid-price on the Erato “In Excelsis” sublabel (0630 17889-2. Cover left). Tempos are generally slower than expected. Rather than a compromise being reached between the desired texture of sound and the fastest possible tempo; one feels that the whole work is laboring bar after bar as a result of some unfinished argument between the conductor and the sound engineer , or that the on-site recording was quite simply beyond the powers of the tonemeister.

Lobet den Herrn, alle Heiden (BWV 230) and Singet dem Herrn ein neues Lied (BWV 225) suffers from this exactly. This engineering problem, added to their great complexity and technical demands makes the choir sounds effortful and contrived. Running notes are chopped up so as to avoid further muddling of the choral sound due to the inevitable echoes that arise in the church.

Further, the choral sound is ill-balanced; sounding edgy at many parts in the set of motets. Individual parts can often be heard apart from the entirety. The frequent alternation between solo lines and full choral tuttis are often badly managed by the sound engineers. One wishes that the laudable effort to create an authentic cathedral sound were matched by an equally competent sound engineer.

It is a great pity hence, as there are quite a few very remarkable moments in Gardiner’s interpretation of these motets. One can feel the greatness of Gardiner – the masterful shading and line treatment of choral forces characteristic of his many Archiv recordings are already evident here.

Despite being somewhat diminished due to the inconsistent sound engineering, the Montiverdi Choir remains interesting to listen to. They are an excellent choir, well above average and capable of delivering some very beautiful singing. Frchte dich nicht (BWV 228) is one example where the sound engineer and the choir seemed to be working hand in hand. The result is stunning, captivating and one is thoroughly convinced.

Though Gardiner’s reading does not boast the same energetic feel that the others in this series of reviews benefit from, what is interesting is his large-scale treatment of these motets. The effect is grand, awe-inspiring and with some persuasion, (through repeated listening) very agreeable as an alternative reading. Double choral effects are skillfully managed by Gardiner in Singet dem Herrn ein neues Lied (BWV 225). There are moments of real excitement here despite the choppy feel in the line.

However, the sound remains a let down as spatial effects desired through the placing of two or more choirs antiphonally in BWV 228 and BWV 225 do not materialise due to bad engineering. Soloists are well chosen in the Jesu Meine Freude (BWV 227). Both sopranos Elisabeth Priday and Gillian Fisher, apart from minor inconsistencies in some parts, achieve sound musicianship with beautiful treble quality reminiscent of boy sopranos. The alto Ashley Stafford has an ethereal quality and manages the trio section “So aber Christus….der Gerchtigkeit willen” quite beautifully. (I would have classified his voice as a counter-tenor instead) His lack of consistency in tone production throughout the counter-tenor register is probably also beyond the skills of most counter-tenors, excepting only the best.

The English Baroque Soloists does an efficient job supporting the Montiverdi Choir. At moments it is even felt that it is the orchestra that helps to even out the mess created by the bad acoustics.

Gardiner has included here several pieces that he considers to be motets or motet-like works attributed to the great Bach. There are a lot of arguments for the inclusion of these pieces in this set, thus making it a two-CD mid-price recording. Sufficient liner notes are given to explain for their inclusion and the interested listener can satisfy his curiosity there. The review of these pieces are out of the scope of this article, save to say that they are extremely interesting to listen to. They too, however, suffer from the same problems of sound engineering.