Symphony 1997 “Heaven Earth Mankind”
for solo cello, bianzhong, children’s choir and orchestra. Commissioned by the Association for the Celebration of the Reunification of Hong Kong with China, July 1, 1997. 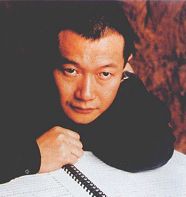 Composer and conductor Tn Dn (left) was born in 1957 in Hunan, China. After planting rice for two years during the Cultural Revolution, he worked in a Beijing opera troupe. At 20 Tan was admitted to the Central Conservatory in Beijing, and he eventually attained his doctorate in composition at Columbia University, New York City in 1986, the city where he is now based.

He has become famous for his opera Marco Polo, commissioned by the Edinburgh Festival and premiered in 1996 at the Munich Biennale. His work has already been the subject of various film documentaries by Finnish, Danish and British television authorities. Recently appointed as the Resident Composer and Conductor with the BBC Scottish Symphony Orchestra, Tan has also performed with the London Sinfonietta, London Philharmonic, the LA Philharmonic, the Orchestre Nationale de France among others. His awards include the 1993 Suntory Prize Commission from the late Toru Takemitsu and the 1996 City of Toronto-Glenn Gould International Protege Award. (Adapted from CD sleeve notes.)

Too long has “classical music” been a creative domain of the West. Even if a Chinese composer such as Tan Dun must to some extent utilize elements of Western music, so to speak, it has been overdue for Asia (and not just the Chinese) to make a mark in terms of contemporary compositions. We should not forget that many instruments in the Western orchestra are derived from the East – the bianzhong bells, which plays a key role in Symphony 1997, were themselves cast 2400 years ago.

In a globalized world, music should no longer refer to music of Europe or of America – every culture has tremendous possibilites for contribution to humankind’s greatest art. Commissioned for the celebration of the reunification of Hong Kong and China, Tan Dun’s Symphony 1997 is a monumental work lasting over 70 minutes. Arguably, it is rather too long and on reflection it has some element of pastiche. Still, with its irresistable rhythms, powerful theatricality and persuasive blend of Eastern and Western elements, it should be able to offer something for any curious collector. The opening and closing Song of Peace alone, I think, will become a favourite among choirs, festivals and airline adverts!

My feeling now, more than a year after reviewing this, is that it is a work probably MUCH better served “live” – this is particularly due to the theatrical style of Tan’s music.

Right from the start, we are treated to the resonant sounds of the 2400 year-old bianzhong, signalling their arrival from an ancient past. The orchestra and children’s choir sing the Song of Peace in which a large array of small-scale percussion is cleverly and effectively used to provide a current of rhythm, but never sounding noisy. Above an optimistic melody, the choir sings the composer’s adaptation of the “Song of Peace”, a poem by Li Bai (CE 701-762; also known as Li Po or Li Tai Po – author of most of the poems used by Mahler in Das Lied von der Erde).

HEAVEN, the first of the three main sections of the work, begins with a haunting cello solo, played with the use of traditional Chinese methods. The highly melancholic atmosphere is further charged by the otherworldly voices of the bianzhong. The theatrical use of voices, with its vocal interjections and recitative-like parts, is added to the highly dramatic roles for hand claps and percussion. The cello and choir later reappear singing in an understated dramatic fashion, providing, in all, a highly visual score.

“As a composer, when I hear these innocent children’s voices, I feel they are chanting the past. When I listen to the sound of the bianzhong, I sense it is singing the song of the future.” (Tan Dun)

In continuing its intra-cultural landscape, Tan inserts the beautiful Chinese folksong, Mo Li Hua (“Jasmine Flowers”), a song also immortalized in Puccini’s Turandot. The composer’s arrangement here is simple but effective, demonstrating his ability to assimilate the traditional into the current without any sense of clich.

Dragon Dance is a depiction of the large, colourful paper dragons used in Chinese festivities, “mounted” on several men who “fly” the traditional mythical emblem of beneficence through the streets. The movement begins with “long horn” blasts on the lower brass. With imaginative fanfare work, Tan develops the music into a boisterous – but not noisy – dance on drums and other percussion instruments.

In Phoenix, the violins create a shimmering melody depicting the counterpart of the dragon. The famous “Joy” theme of Beethoven’s Ninth Symphony is quoted in Jubilation. It makes for some exciting listening, music which gathers energy as it gathers joy, leading to an exhilarating close with a surprise appearance by the bianzhong.

In Opera in Temple Street, Tan superimposes a taped recording of a scene from traditional Chinese opera over a growing bass drone. As the bells seamlessly take over from the opera, the music fades into quiescence, with soft brush beats and the bells, intoning softly.

“Twenty-four hundred years ago, the people of the Zhou Dynasty buried the bianzhong – never imagining that the bells would be played again …” writes the composer. Commenting on the dying art of Chinese traditional opera, he adds, “Twenty-four hundred years from now, I hope people can still hear the street opera in Temple Street… Has anything on earth never died? Except music, what else?”

In EARTH, Tan (right, with cellist Ma Yo-Yo) allots a major role to the cello. “Responding to the Yi-Ching‘s teaching that change is continual, Tan conceived a series of Yi concerti as a way of balancing the visible (“that which already exists”) and the invisible (“that which has not yet come to be”)…” (Mary Lou Humphrey, from sleeve notes.)

With imaginative use of mallets, sticks and brushes, the score for the bells create an evocative atmosphere, reminiscent of Indonesian gamelan at times. The solo cello, playing with the bells, creates wonderful music, showing the composer’s seemingly reflexive response to the formal possibilities of rhythm and stylistics of instrumental performance. The movements in EARTH are mainly dark, with many long, quiet sections; sometimes foreboding, with strange, twilit soundscapes, isolated gestures and enigmatic silences. Each of the four sub-movements is joined to the next, creating a seamless whole, as the elements should be in the cosmic, and cultural, “melting pot.”

MANKIND begins appropriately with the unmistakable vocal interjections of man, as if announcing his arrival into the elements. An ominous introduction leads to a tender lullaby of great beauty, with a simple choral accompaniment and Ma’s lusciously passionate support on the cello. This is a prelude to the actual Lullaby, sung to a poem by the composer, the lament of a parent singing to his child in memory of those who died in the Opium War and World War II.

As it was in the beginning, the Song of Peace returns to close the symphony in triumph: 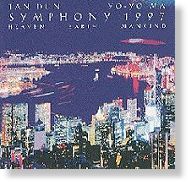 Heaven – Earth – Mankind
Listen!
The bells, no longer bidding farewell,
knock and herald Spring’s door.
The wind, no longer of winter,
blows the bugle of jubilation.
The drum, no longer warring,
plays with eternal harmony.
The mother, no longer crying,
sings songs of joy.
Ah!
Heaven, Earth and Mankind are joined in common birth.
All of the world are as one.

With additional cello solos, the choir sing with the vibrantly resonant bells. The masterly orchestration is complemented by the highly original use of percussion rhythms. Rarely has music of such beautious simplicity been so well cast with the irresistable drive of a simple yet compelling rhythm. The jubilant ending for the choir and orchestra is ecstatic in a quiet, noble way – but it is the bianzhong which has the last “words”, celebrating harmony and unity with a carillion of joy.