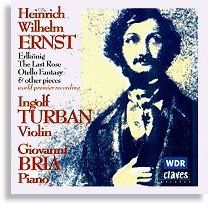 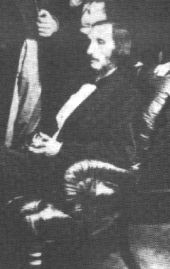 Heinrich Wilhelm Ernst is probably a name unfamiliar except to a few. Indeed, his works are still undeservingly languishing in obscurity. He is a violin prodigy who had his debut at the age of nine, and was the influence of the violin wizard Paganini after their meeting five years later. Ernst’s musical output concentrates on the violin, and includes some string quartets (which to my knowledge has never been recorded), and a violin concerto recorded by Aaron Rosand under Vox Box.

It is strange that Ernst is forgotten today, for he was considered extremely well-known then, giving concert tours throughout Europe and in this way encountering most of the prominent musicians of his time. Before his meeting with Paganini, he was the most brillant student of Joseph Bhm at the Vienna Conservatory. With the reputation of a violin virtuoso after the inspiration he derived from Paganini, he met Schumann, Joachim, Liszt and Berlioz, with whom he performed as a viola soloist in Berlioz’s Harold In Italy. In the late years of his life, Ernst joined the London Beethoven Quartet Society and played the famed Beethoven quartets with Joseph Joachim, Henryk Wieniawski and Alfredo Piatti. With such a extraordinary history, one is amazed that the music world does not mention his name anymore.

In the mould of violin virtuosos who compose amazing and fiendishly difficult music, Ernst’s works are full of technical displays and fireworks. Like his idol Paganini, he stretched the utmost limit of violin technique, and his works are not any less difficult then what Paganini can dream of. However, they are of a more Romantic and capricious nature compared to Paganini’s classical style of composing, and he also composed in a wider range of forms. These include romances and salon pieces in addition to his solo violin etudes.

More often than not, his technique is a means to convey the music: beautiful music that is created with the same dazzling effects Paganini would exploit for showmanship instead. It is music that is not intellectually dense like Ysae‘s or Wieniawski’s showpieces, but charming and lyrical compositions that can delight and move. 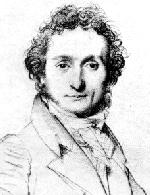 The Six Polyphonic Etudes for Solo Violin are tour de force virtuosic etudes. Unlike Wieniawski’s own Etudes and the Caprices of Paganini (right), they succeed very well in being musically satisfying to the listener, with the wit and emotions conveyed in them. The First Etude is a lively scherzo con spirito. It is made up of a bright motif and juxtaposed with a flowing two-line melody achieved by playing both a running scale accompaniment along with the main melody. The Second and Fifth are caprices with double-stopped notes throughout the piece, and the Fourth is a moto perpetuo-like piece with dazzling scales and arpeggio runs all through its entire duration.

In my opinion, the Third and the Sixth are of special interest. The Third Etude is a complex polyphonic composition which is extremely lyrical and also subtle in its beauty. Yet at the same time it is very technically difficult, requiring the playing of legato double-stop passages. These passages make up the whole piece lyrically, something unheard of in Paganini’s music.

The Sixth Etude, “The Last Rose of Summer”, is perhaps his most popular piece, which virtuosos like Gidon Kremer and Ruggiero Ricci have recorded as showpieces. Based on the Irish folksong of the same name, it is a collection of several variations on a theme. Stylistically, it most certainly emulates Paganini. Examples of Ernst’s brilliant improvisation are cross-string arpeggios and the use of left-hand pizzicato to pluck out the melody while a running scale accompaniment plays on. Having seen it played “live” as an encore piece when Juliette Kang came to play the Tchaikovsky, I can attest to its fabulous display of skill, surpassing even Paganini’s famous variations in the 24th Caprice.

To my knowledge, only Ruggiero Ricci has recorded the six etudes together (Dynamic CDS 28). He played them in a rather sharp manner, particularly with the First Etude, tossing them off as encore showpieces. He seemed to want to only dazzle the listener with his ability to overcome the difficulties that the etudes posed. In contrast, Ingolf Turban on this Claves disc brings out the musical ideas behind the pieces. He does much better than Ricci, especially in the Third Etude which not only requires exceptional playing skills but also an understanding mind to the music. In any case, Turban certainly equalled (or more than equalled) Ricci’s virtuosity – the restraint he showed in some etudes implyed a more complete control over his instrument than Ricci’s ability to play them in a rushed tempo.

The Romances, the Nocturne and the Elegy are sentimental pieces with a touch of Schubert in them. The First Romance is almost certainly fashioned in the manner of Paganini’s Cantabile in D, where a singing part from the violin is supported by pulsing and urgent chords from the piano.

In the other three pieces, there is a common use of lyrical double-stop playing to add a separate voice into the music, particularly notable in the Second Romance and used to striking effect in portions of the Elegy. This brings about an additional dimension to the music, and is certainly not virtuosity for show but a device used instead for the expression of the music intended.

The other four pieces in the CD are no less exceptional. The Othello Fantasy is a piece formed from Rossini’s opera, marked by a subtle linking of different themes to create music that almost sound as if it is going nowhere. There is no lack of virtuosic playing though, with virtually every sort of techniques and effects used. The Hungarian Melody can be likened to Liszt’s own works of that name which shows an exposition of musical ideas with virtuosity.

The Rondo is a delightful work with a touch of Mozart’s mischieviousness and an exercise for ricochet bowing. The Erlknig, a solo violin caprice based on Schubert’s lied of the same name, is equal in popularity as “The Last Rose”. Violin technique is pushed to the limits here to convey a dark and sinister mood that almost borders on insanity and madness in its nervous energy.

This is really marvellous music, an incredible experience to hear the violin used to such effects in compositions tailored to show its technical and lyrical possibilities. Above all, the music of Ernst shows a poetic nature akin to Schubert’s or Schumann’s works. The way he combines the elements of violin playing to create such music is not something most violinist-composers can boast of.

This disc is available at or can be ordered from Tower (Pacific Plaza & Suntec City), Borders (Wheelock Place) or HMV (The Heeren).

Ong Yong Hui hit the books again after this distraction, and hope his teacher accepts pleas for leniency.