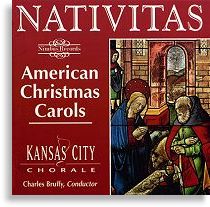 Includes full texts in English. This review is generously sponsored by Andrew Petersen. 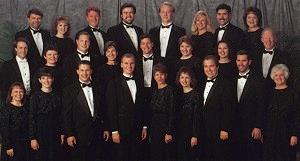 Choral singing is a vibrant tradition in Kansas City that continues to link many midwestern Americans to their European roots. This tradition showcases itself as being most well and alive during Christmas, where the familiar stories, imagery and theology of the season are given a reworking in age-old European forms that are infused with distinctly American musical idioms.

This recording features a varied selection of Christmas music by American composers, taking into account a good historical cross-section of composers and their works: from the nineteenth century to the present, the forefathers of the avant-garde to the enduring Romantics.

The title of Nativitas, the song cycle by Jean Belmont, a native of Kansas City, graces the album. The cycle comprises eight choral cameos which depict the celebratory anticipation and arrival of the Saviour. The mood of the cycle ranges dramatically from the still and sombre to the rousingly triumphant. Using texts derived from mostly 15th, 16th and 17th century sources, Belmont borrows eclectically from styles and forms of the past.

The result – a modern work that captures the atmospheric invocations of a past spirit of reverence and mysticism, while remaining fresh and immediate in its capacity to impact. Such experimental variety only goes to show that musical traditions of the past need not necessarily come across as anachronistic when they make their appearances in more contemporary works. 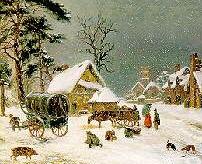 Other instances of such reworkings include some pieces that I personally find appealing. Familiar melodies like Stille Nacht, Heilige Nacht (“Silent Night, Holy Night”) are given reinterpretations in two arrangements, one by Mark Johnson and another by Kevin Oldham. The former’s arrangement is memorable for its sensitive, almost restrained ethereal rendering while the latter entrances with its simplicity and for the poignant clarity of the ringing descant solo. “Silent Night” was originally composed on Christmas Eve in 1818 by an obscure Austrian church organist, Franz Xaver Gruber (1787-1863). It apparently became a staple in American Christmas repertoires in the wake of German-speaking immigrants who settled in the American heartlands in the mid-nineteenth century.

Another noteworthy piece, using a famous text by Christina Rosetti, Love Came Down At Christmas has a lush beauteous quality that reflects upon the more Romantic inclinations of its composer Leo Sowerby (1895-1968). Rather quirky too is I Saw Three Ships (arr. Edwin Fissinger), which catches you up in a rollicking, swinging rhythm that is maintained throughout, at first gentle, then moving on to become unexpectedly feisty.

Other tracks to look out for include a set that comes under the title Three Mystical Carols (by Conrad Susa) and another mini ‘trilogy’ called Three Shepherd Carols (by Arnold Freed). These choral pieces move from being unabashedly hearty and vibrant one minute, to being languid the next, and on the sudden return to a renewed rambunctious and joyous energy. Similarly traversing such grounds, raw vigour alternate harmoniously with sweet expressive melodies in Joel Martinson’s There Is No Rose.
Right: Detail from “Hunters in the Snow”(1565) by Peter Brueghel the Elder.

Unlike conventional carols with seasonal appeal (which sound strange and ill-fitted when played outside the context of Christmas), these carols sound more like cathedral hymns and prove to be more perennially accessible. I’m listening to it in the middle of the year and don’t get the sense of dislocation I normally feel when ‘festive’ music is played out of season.

One does get transported, however, out of time, as these relatively ‘modern’ works evoke the forms, texts and choral stylistics of the European past and go as far back, sometimes, as the medieval past. Yet the flavour is distinctly American and every so often, the strains of more recent musical traditions break through the surface. In asserting themselves, they add dashes of vibrance and vigour that give character to a landscape that is primarily an oasis of quietude and serenity.

This disc is readily available at, or can be ordered from, Borders (Wheelock Place) or Tower (Pacific Plaza & Suntec City).

May Lynn is a winsome Blake-enthusiast in search of a little bow-wow that may not necessarily yap. She has the world’s most powderful modem, everybody’s favourite cranky computer and a really cute “Ooooooooo!”

– This description courtesy of the Editor, who happened to be her classmate.