Strike up the Band…once again!
A New Look at the Music of the Wind Bands 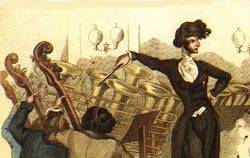 THE “WIND BAND”, the “Symphonic Band”, the “Concert Band”, the “Wind Ensemble”, the “Wind Orchestra”: these are all synonyms for an ensemble which relies mainly on wind instruments and percussion, with few or no string parts. It is a medium that only became popular in the middle of the 20th century. Actually we’ve already seen these ensembles in different forms, from the serenade wind bands of Mozart to the English brass bands, to Sousa’s marching band, Glen Miller’s big band, to the military bands in every country plus the many wind orchestras and symphonic bands which exist in the world today.Above left: Caricature of Berlioz with his “Super-Orchestra”

Band music has moved away from its stereotype marches and military parade music to take a deserving place amongst the canon of ensembles which deal with “serious” music. This only goes to show the versatility and virility of wind instruments in their various combinations and the potential of these ensembles, which have been recognized by great composers of the likes of Gustav Holst, Malcolm Arnold, Percy Grainger and many more who have composed for orchestras without the entire string section.

So what’s the difference, without the Violins, Violas and Cellos?
There is no difference musically, just that there are no parts for string instruments! Many wind bands have retained the string bass in their midst, to assist in delicate passages which tubas sometimes seem to clumsy in. In terms of repertoire, arrangers have substituted the string parts of many classical transcriptions for wind band with other instruments, usually the woodwinds. If anything, these parts require much more virtuosity from the wind players, as they are not often exposed to such parts due to the limitations of breath control in the playing of wind instruments.

Rather than falter or compromise the music, the wind bands have developed a new genre of startling virtuosos who handle these challenges with an easy proficiency. I have heard renditions of the Russlan and Ludmilla Overture with the daunting running passages executed with accuracy and finesse, as well as performances of Stravinsky’s Firebird Suite, Debussy’s La Mer and even Bach’s Passacaglia and Fugue in C-minor without the slightest hint of inaptness or fault. No doubt the wind band is different sounds different from an orchestra but its unique sonority is perhaps the best reason why we should pay attention to these new ensembles. They can generate beautiful phrases and strains never heard before by musicians who have challenged the limitations of the wind band, and sweet music literally with the air in their lungs – each delicate phrase a sigh and each note in the grandest fanfare a test of stamina and strength.

Many people have this impression that the orchestra is a superior ensemble as compared to the wind symphony. I would like to stress that they are both distinct and unique ensembles, each with a vast and diverse repertoire which are not meant to be compared. Even when the wind band takes on orchestral repertoire, one must understand that it is an individual performance and interpretation, not the wind band trying to imitate an orchestra. Taken in the same light, we cannot criticize the London Symphony Orchestra for not having the right “feel” in their attempts at “Classic Rock”. The LSO has done well in their medium and were justified in their attempt to bring symphonic music to the popular audience. Such is the relationship between the band and the orchestra.

In recent years, many composers have also looked with favour at the potential of the wind band, creating a potent repertoire for this medium. It began with the marches from the pen of the March King, John Philip Sousa, who was a master of counterpoint and melody. (It is a little known fact that Sousa and Anton Bruckner shared the same teacher!) Paul Hindemith, Ralph Vaughan Williams and Gustav Holst wrote now what we consider standard repertory for the wind band. Celebrated Australian composer and pianist Percy Grainger demonstrated new possibilities in harmony and the potential of wind instruments (notably the saxophones in the ensemble) in his settings for folk songs, most notably, in the suite Lincolnshire Posy. Author of the ground-breaking treatise “20th Century Harmony” Vincent Persichetti wrote full symphonies for the wind band.

(Click here for more details on recordings of these music.) 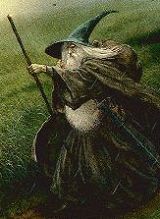 IN RECENT YEARS, talented young composers have accepted the pen from these masters and have produced much more music for this beatiful medium. Dutch composer Johan De Meij (b.1953) composed The Lord of the Rings (left: the wizard Gandalf), a symphony for wind band which has received numerous nominations and awards. American Alfred Reed has to his credit five symphonies for band, numerous concert suites and many overtures. One of his latest contributions is his Fifth Symphony “Sakura”, thematically based on this popular Japanese folk tune. British composer Phillip Sparke is renowned in the wind band scene for his sparkling compositions and concert favourites, amongst which is Orient Express, a semi-programmatic work describing with refreshing realism a journey of this famous train.

Composers aside, distinguished conductors have guided their ensembles to international acclaim. The most famous of which is Frederick Fennell, who released a definitive collection of the wind band repertoire with Mercury Records and who is now conductor of the world-famous Eastman Wind Ensemble and the Japanese Tokyo Kosei Wind Orchestra. Another great musician is Eugene Corporon, who now leads the prolific North Texas Wind Symphony (University of North Texas College of Music) which in 1989 initiated the Klavier Wind Recording Project which to date have yielded 15 recordings. These feature over 100 compositions by more than 80 composers amongst which are Shostakovich and avant garde musician John Adams.

I would also like to point out that locally and overseas, the wind bands serve as an excellent venue for young musicians to learn their instrument and to be exposed to music. Being financially and practically more viable to set up than orchestras in schools, many who have had the courage to further their musical education had their roots in the band movement.

Perhaps what we should address is the education of these young musicians in school bands and the type of exposure they get from band music. There are many, many poor compositions out there which seem to have only commercial appeal but not aesthetic value. These should only be used at best to whet the musical appetites of young musicians and not to be hailed as masterworks by their teachers in front of these impressionable youths. Properly developed, this channel will definitely be a major contributor to the few serious musicians we have locally and internationally.

Here is another medium for music which all serious musicians should consider again. Give it a chance and you’ll be duly rewarded. As for those of us who have had our heads stuck in band music all these while, it’s about time we looked beyond the musical horizon and realize what we have missed. We recognize music by its sound, meaning and emotion, and not merely by its instrumental make-up. We all have our preferences… but first lend an ear to the wind bands. You’ll be surprised.

Click here for CD Recommendations and Reviews! Band CDs can be ordered on-line from the Singapore-based Band CD Gallery.

When not writing serious and lengthy essays on Wind Bands, Adrian Tan actually has a life.

Great submit, many thanks for that. INKPOT#46 CLASSICAL MUSIC FEATURE: A New Look at Wind Bands is cool! May I consult the website owner where he or she obtained his layout? Or does it appear standard at this blog? Keep it up and many thanks once again for your time and hard work.