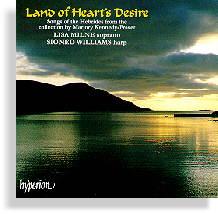 Click on cover image for full details of programme.

A Scottish soprano singing Gaelic songs of the sea, of love, of Celtic memories… accompanied on the harp – when I first found out about this disc, I thought it must be a marriage made in heaven. And I wasn’t disappointed at all.

Aptly titled “Land of Heart’s Desire” after the first track, these songs were collected, scored for voice and piano, and put on paper by Scottish musicologist and folksong researcher Mrs. Majory Kennedy-Fraser (1857-1930). She first went to the Outer Hebrides (Hyperion’s notes even provide a map) in 1905 in search of the Isles’ ancient folksongs, and collected these from various individuals. Many of the English translations as heard here were made by Mrs. Kennedy-Fraser herself. A little note tells of how a young girl sat on her knee and sang some of these songs to her.

Such tender yet heart-stirring imagery characterizes this recital. The disc is programmed as a listening and learning experience. The brief and beautiful “Land of Heart’s Desire” [track 1], a slow song of “ecstatic serenity”, opens the disc. The next section of this “concert” consists of “Lovesongs and Laments, Lullabies and a Wedding Song” The former includes the rightly famous love-song Gradh Geal mo chridh, “An Eriskay Love Lilt” [2].

The young Scottish soprano Lisa Milne (left) is an absolute pleasure to listen to throughout the entire CD. Her voice is tender and beautiful where appropriate, rising powerfully into the heights when needed, as in “The Leaping Gallery”[27]. Yet she is always beautifully poised, never sounding strained or piercing. Her fullness of voice is tempered with just the right touch of fluidity; her enunciation of words focussed but unfussy. Overall, she is a highly natural singer, as she must be, singing the songs of her homeland. Indeed, I feel the songs coming straight from the heart, full of grace, patience, love and beauty. An example of this is the heartstopping sweep of “The Wild Swan”[31].

Lament, or melancholia, seems always a strength of traditional folksongs. “Caristiona”, subtitled “A Mother’s Mourning” (for the loss of her child”, is made all the more desolate by the wistfully lonely sound of the harp. “The Mermaid’s Song” – “An Eriskay Lullaby” [6] – is one of the many heavenly songs of soft beauty, graceful and sweet. This is one of the songs that Mary MacInnes, the young girl who sat on Kennedy’s lap, sang for the collection. The swaying lyrics of An ghille dubh ciardubh [8] – “a 13th century love lilt” – is delightfully accompanied with simple descending phrases on the harp. 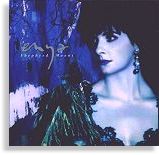 It was with pleasant surprise, and than realization (that I should have known), when I heard the refrain of “Benbecula Bridal Procession”[9], with its recurring “Hi o ha lo vi ri u vi hua hua“. Fans (I’m one!) of the Gaelic “New Age” musician Enya will recognize the line and tune from Ebudæ, from the album Shepherd Moons (right). (There may be more references elsewhere.)

Although the next section is titled “Songs of the Supernatural“, it demonstrates a range of moods that probably go beyond what we expect from the word. “The Witchery Milking Croon”[10] is in fact quite tender and quiescent, as is the “Skye Water-Kelpie’s Lullaby”[12]. “The Uncanny Mannikin of the Cattlefold”[11] is full of mystery, the singer singing nervously as she watches “a wee man red with his long beard” combing his long hair. Although the lyrics mention fear, the impression is really of being awestruck by fairy beauty.

A set of “Work Songs” follow. The delightfully playful “The Cockle Gatherer”[14] is remarkable for its catchy refrain, as the gathering proceeds in the company of the joyous screams of seagulls and laughter of sea-waves. Equally likely to inspire a smile is “The Crone’s Creel”[17], happily singing of “peats and bairns and tangle”, burden carried by the islanders for daily use. Among these are songs of a more meditative nature, such as the spinning song Oran sniomha [19], a poetic musing on love and fate.

The notes indicate that it was not unusual for women to sing such “stirring sea-ballads” as “The Ship at Sea”[20], “Sea Wandering”[21] and “The Reiving Ship”[23] from the section entitled “Seafaring and Sea-Rapture Songs“. Indeed these are songs of quiet strength and forward utterance, joining beauty and courage. The gorgeous and melancholic strains of “Sea-Longing”[22] melts the listener’s heart. This melody was also used to great effect by Sir Granville Bantock in his Celtic Symphony. “Kishmul’s Galley”, a heroic song of praise, is also used in his Hebridean Symphony.

This is the first time I’ve come across the phrase “Sea-Rapture Songs”, but anyone who loves nature’s waters will instantly understand the appropriateness of such a name, such as the poet of “The Coolin of Rhum”[26], or the composer of the sparkling yet tranquil “Sleeps the Noon in the Deep Blue Sky”[30]. Equally lovely is the heartwarming beauty of “Isle of My Heart”[28] with its scintillating harp accompaniment.

Principal Harpist of the BBC Symphony, Sioned Williams provides a sparkling accompaniment throughout which is as beautifully inspired as it is unobstrusively faithful. Sometimes light and soft, sometimes lyrical and rhythmic, other times mysterious and moody, she provides a pulse in the music which is both indispensible and enhancing. This Welsh harpist’s skill and sensitive accompaniment, eg. in “The Reiving Ship”[23], glitters like seawaves in the sun. My heartiest thanks to the producers for having the musical intelligence to employ a harp rather than a piano (as the published scores were set for).

Hyperion provides full libretto – the annotation for each song preceeds its lyrics, which is the simple and obvious thing to do, and yet only this record company has had the intelligence to achieve. The 24 pages’ worth of notes are written by, to my surprise and approval, the managing director himself, Mr. Ted Perry!

The programme ends with “Mouth Music and Valediction“. Mouth music refers to meaningless words used to imitate the sound of musical instruments, as in the refrain of “Dance to Your Shadow”[33]. The disc and its performers bid goodbye with “Aignish on the Machair”, a song of nostalgia, yearning for home. A truly sad farewell, but which makes me want to hear the disc all over again…

This disc is available at or can be ordered from Beethoven Record House (Centrepoint), Borders (Wheelock Place) and HMV (The Heeren).

Chia Han-Leon does in fact have all of Enya’s original albums, all seated between “Elgar” and “McEwen”. He drinks coffee everyday but is flabbergasted that it no longer seems to have an effect on him.