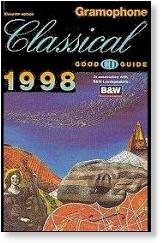 All reviews written by Gramophone reviewers.

First of all, the annual Gramophone Classical Good CD Guide (let’s call it the Gramoguide) is not really a guide. It is more a collection of reviews (some abridged) of CDs, derived from and identical to those published in Gramophone magazine. In fact, that’s exactly what it is.

As such, there is a certain selectiveness regarding the range of composers and works reviewed. The Gramoguide is not so much a guide to music repertoire (which the Penguin Guide can function as) but a guide to CDs. This is because although a rare work or composer may be mentioned, it/he/she may only be represented by an entry for the CD, and no other info is provided. Don’t even expect a large number of reviews of Beethoven’s “Choral” Symphony or Vivaldi’s Four Seasons just because they are popular – there are only two of each, and they are not necessarily new reviews. This can result in a very serious drawback, because in some cases, there simply isn’t enough information to give one a sense of choice. Eg. if you are looking for a recommendation for the Mozart string quartets, you only get three reviews (of which one is an 8-disc set) and a list of 17 one-line CD recommendations. The Penguin Yearbook provides seven (albeit shorter) reviews, while the main volume has four pages devoted to them. Whatever the case, the Penguin tends to provide much more info, which is especially helpful regarding lesser-known works and composers.

But sometimes, less is a good thing if you just want to get to a decision without poring through tons of reviews with vague implications. There are pros and cons to both approaches. In some cases, The Gramoguide seems much more discerning and convincing with its top recommendations. This is still totally subjective of course, but is aided by its rating system, comprising none to three G‘s. Now, unlike the 1997/98 Penguin Yearbook‘s star rating system, the Gramoguide is much more strict. A review without any G‘s can still be about a great CD, but the addition of even a single G is quite an accolade. In my experience, CDs awarded with three G‘s have so far proved to be real classics. As one writer puts it, these CDs really hit one’s G-spot… Unlike the rosette and the ubiquitous *** ratings in the Penguin Guide, G awards in the Gramoguide are fairly rare, and GGG reviews even more so. What I’m saying simply is that the Gramoguide is more careful with their ratings, which make the G‘s something to notice. Penguin veterans will know that ***’s nowadays mean very little.

The Gramoguide also indicates period performance recordings with a little quill symbol. Another little thing that this Guide helpfully provides, for me at least, is the nationality of each composer listed. It will not interest everyone, but it saves me the trouble of poring through rambling dictionaries. It’s an unexpected bonus.

Of course, the irony is that the writers of the Penguin Guide are also involved in the Gramoguide – in fact, they are big shots in Gramophone magazine (left), often responsible for regular columns like Quarterly Retrospect and Collector’s Corner. Nevertheless, we are talking about 46+ writers (Gramoguide) versus the Penguin’s three. There is definitely more range of opinion in the former, and it shows.

For one thing, there are disagreements between the two, which make for a really fun reading experience! Eg. Shostakovich Cello Concertos played by Mischa Maisky (DG) – ** vs GG! Nevertheless, the British Bias is present, a la John Eliot Gardiner, though I’ve always felt that it isn’t quite as intrusive in the Gramoguide. (More about the British Bias in the 1997/98 Penguin Yearbook review.)

The written style in the Gramoguide is quite varied. At best, you can get some really good writing that befits the excellence of some of the recommended CDs. At worst, well, you don’t get any reviews – just an entry, and sometimes with three Gs! The Penguin Guide doesn’t do this, but as I’ve implied – the two guides have slightly different functions and foci. Some of the Gramoguide’s reviews are cropped, so don’t be surprised when a review sounds in media res, starting in the middle of things. You can take a look at some sample reviews as they would roughly appear, at the Gramophone Magazine Homepage.

The Gramoguide’s compilation section is MUCH more well-organized than the Penguin Guides’ haphazard attempt. I still don’t understand why the latter doesn’t do the obvious thing that the Gramoguide has done – provide a damn index!! It makes looking for a review in the compilations section so much easier in the Gramoguide!

The Gramoguide also includes lists for a suggested “Basic Library” and Gramophone Award winners through the years. The Editor’s Choices (note: it’s his choices) are indicated within the reviews. Helpful, but these things can still be inherently dangerous as they will obviously favour one composer/piece over another. Just like me. But I’m not one for canonization.

Watch the price categorizations as well: eg. The Wagner Edition operas on Philips are only mid-priced if you buy the full 32-CD set. Philips Duo CDs are marked (M) for mid-price, but they are either counted as 2 budget CDs or one full-price C

INKPOT CLASSICAL MUSIC FEATURES: How to walk into a CD store and not come out totally confused…