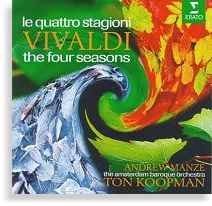 [56’27”] full price
Sonnets not included, but a nice portrait of Vivaldi is. 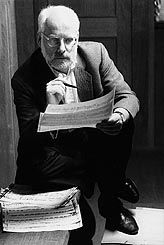 Formed in 1977, the Amsterdam Baroque Orchestra is one of the most skillful period orchestras today, and under the direction of Dutch harpsichordist/organist Ton Koopman (right), is recording all 200+ cantatas of J.S. Bach (Click here for a review of Vol.4). They take a well-earned break here in recording one of the pinnacles of Baroque concerti.What strikes me immediately in Spring are the playful embellishments to a normally less-conspicuous harpsichord part, played by Ton Koopman. He is like a child gleefully discovering the effects he can elicit from a new toy.

In the second movement, every time the soloist, Andrew Manze, meanders from his musical line, the goatherd drifts deeper into sleep, but the barking of the dog on the violas pulls him closer to half-sleep. A very interesting rendition of the concerto.

In the Summer storm – Manze plays the music with a nervous quality. The harpsichord has the volume just right, not too loud nor jarring (which tends to occur in this movement for many versions). The movement ends uniquely with a sudden diminuendo, impressively imitating the naturalness with which a real storm peters out. In this way, the following movement seems to link seamlessly with the first. Similarly, Manze displays great skill in his ability to drift in and out of a hypnotic trance. The final storm sustains itself with great energy, never seeming to tire.The strings sound slightly off in the opening of Autumn, while Koopman is his usual playful self. The soloist seems slightly off-key, probably due to the temperament of the Baroque-tuned instrument.

As expected of Koopman, the chance to show off the harpsichord in the middle movement is exploited and given a distinctive voice.”The Hunt”: once again the harpsichord hops along with happy trills to join in the game, but Manze proves again to be sharp of tone and even more off-key. Still, the movement is as a whole extremely appealing, and full of delightful touches. These include (all towards the end) a little diminuendo, a “drunken” meandering phrase from Manze and a cheeky “wow-wow-wow” effect created by the strings, all humourously decorated with Koopman’s continuo. Thankfully in Winter, Manze’s tone mellows during moments where he is displaying his technical skill. For the Largo, his notes sound rounded, although the orchestral raindrops seemed too disciplined for nature. I could not fully enjoy this interpretation because of the hurried tempo of the pizzicato. In the final movement, the notes are played short, with just the right amount of “holding-back”.

All these lead to a fierce end to Winter , even more so than the Summer storm. Overall I recommend this disc – kudos to Ton Koopman and Andrew Manze for those moments of inventiveness, not at the expense of their skill, and in keeping with the effects and atmosphere of the concertos. Nevertheless, listeners who cannot tolerate the tonal idiosyncrasies of the Baroque violin should take care.This disc may be found or ordered from Tower (Pacific Plaza & Suntec City), Sing Music (Raffles City) or Borders (Wheelock Place).