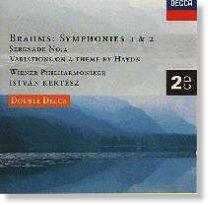 For the first half of his career as a composer, Brahms was uncomfortable with the symphonic form. He seemed to be more at home with chamber music, which he had no problem producing at a regular pace. The first symphony was completed when Brahms was 43, and this was probably more due to his lack of confidence than his musical inability. Whatever the reason, the obstacles to symphonic production were clearly removed, as Brahms composed his second in 1877, the third in 1883 and the last in 1885.

He did, however, try his hand in writing works for the orchestra, as the two Serenades (dating 1857- 1859) evince. Brahms was then choirmaster at the Court in Detmold, where the tradition of the serenade was still upheld. Being a young man in his twenties, it seemed obvious for Brahms to make his mark as a composer with a symphony. His early efforts eventually emerged in the First Piano Concerto (completed 1858), the German Requiem (1868) and the Serenades. Although the serenades were not the symphonies he wanted, Brahms was rather happy with them.

In 1853, at the age of 20, Brahms met Robert Schumann and his wife Clara, and this was the start of a lasting relationship, especially with Clara. It was to Clara that young Johannes showed the earliest physical sign of the First Symphony — an incomplete score of the first movement — in 1862. Despite the urgent inquiries of various conductors, Brahms kept off completing the work. In 1870, Brahms wrote in a letter to conductor Hermann Levi, desperately pleading, 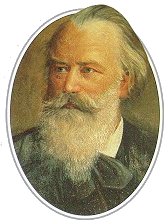 “I’ll never get a symphony written. You’ve no conception of what it’s like to hear a giant’s footsteps marching behind you.”

Brahms (right) was referring to Beethoven, whose Ninth Symphony (1824) seemed to be the peak of symphonic output. Brahms felt that he needed nothing less than a titanic masterpiece for his First Symphony, which he provided in 1876. Hailed by famous conductor Hans von Bulow as “Beethoven’s Tenth”, it was remained a popular work in the orchestral repertory, and is the most often recorded of the four symphonies.

There has been significant reissues of Brahms’s symphonic works in this centenary year. Among the crop of competing cycles of symphonies, Istvan Kertesz’s recordings with the Vienna Philharmonic are certainly in the upper reaches. Kertesz takes a majestic view of the First Symphony, which opens grandly. The orchestra playing is assertive, with weighty timpani and blazing horns. The first and the fourth movement are handled propulsively, without being overly taut or rushed. The slow inner movements are played with an appropriately light touch, and sound endearingly lyrical.

The Second Symphony has often been seen as Brahms’s counterpart to Beethoven’s “Pastoral” Symphony, with its lyrical opening and mellow themetic structure. Kertesz is very much in touch with the sunny nature of the work, and the Vienna Philharmonic convey the idyllic mood well. As in the First Symphony, Kertesz takes the finale energetically, leaving the listener almost breathless.

The two-disc set also comes with the rare Second Serenade, a work that shows the craft of young Brahms, and the Haydn Variations, which is based on a theme St. Anthony’s Chorale attributed to Joseph Haydn. Both of these works refute the notion that Brahms was unskilled in symphonic writing in his early years. If you enjoy Kertesz’s way with Brahms, the second two-disc set (with Serenade No. 1 and Symphonies Nos. 3 and 4) is a worthwhile purchase (Double Decca 448 200-2, budget-price). The sound is warm and full, the vintage analogue recordings having negligible background hiss.

This set can be purchased (or ordered) from Sing Discs (Raffles City), Tower (Pacific Plaza) or Borders (Wheelock Place).

Isaak Koh is sad to see the end of the TV series American Gothic. He also enjoys pressing down coffee plungers.

Back to the Classical Index!… or read previous Brahms reviews and features at the Inkpot